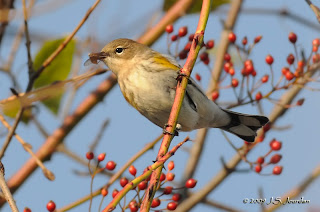 It was sunny and mild this November Saturday morning, but a bit breezy in SE Michigan. I drove down to Lake Erie Metropark in Southern Wayne Co. for a quick walk through the woods next to the Marshland Museum.

Stopped just long enough to say 'hi' to Luc, the park's resident/recovering Bald Eagle, before continuing along the Marshland Trail. Things were very quiet until a few 'tsiit' calls belonging to the White-throated Sparrows were heard. A few moments later an annoyed Winter Wren began chattering (lower, raspier chatter relative to House Wrens) in the underbrush. It appeared just briefly on a log several yards away, but scampered away before I could get binoculars on it. 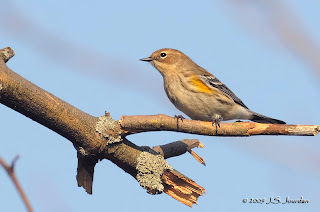 A Rusty Blackbird appeared near the creek and chattered away before flying off. I walked on, finding a pair of Yellow-rumped Warblers feeding up in the trees overhead. I was able to capture a few pics using the Better Beamer and flash unit on the D300. 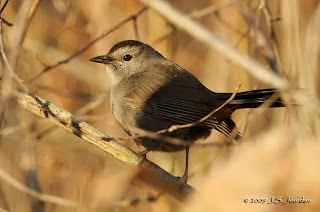 Along the boardwalk a Gray Catbird flew out of the phragmites and landed just a few feet away from me. Startled, it flew back into the brush, but appeared long enough for several quick frames. 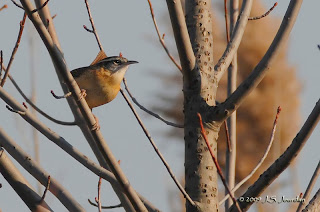 As I returned to the car I heard a short, bubbly 'gggroiiip' and spotted a Carolina Wren for brief moment. I heard this same call a few minutes later when I drove over to Campau Rd. Being able to recognize these short little bursts of call notes really help to identify these birds in winter time, especially when primary song is absent. This time the wren appeared in a tall tree long enough to get a long-distance shot or two from the car.


Pt. Mouillee HQ was quiet. The Huron River was choppy so few birds were near enough to photograph. I stopped by Riverside Park and found no birds there. However, across the road in the large pond off of Harbin Road was a huge flock of 300+ Bonaparte's Gulls swimming among a couple hundred Ring-billed Gulls. Unfortunately the birds were too far off to digiscope.


Water levels were high along Mouillee Creek and no birds were present. Winds were still blowing, so I headed home.