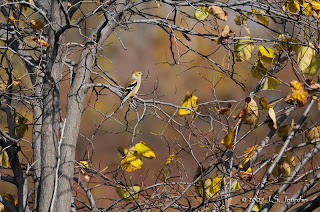 October has ended and the brown season is upon us. Leaves are falling and the trees are becoming bare. I don't mind, because this transition period brings anticipation of a great winter of birding promise. In the meantime, things can get a bit slow around here.


I drove down to Pt. Mouillee HQ this morning to look for anything feathery. A half-dozen Great Egrets linger in the canal off of Campau Rd. A pair of Bonaparte's Gulls were feeding out in the Huron River near the North Causeway. A few Pied-billed Grebes lingered near the boat launch. 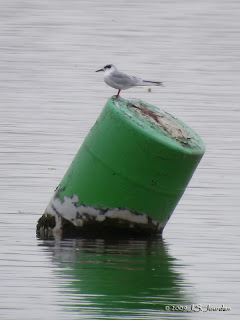 A stop at Riverside Park yielded three Forster's Terns feeding 50-100 yds. out. I managed a keeper digiscoped image of one bird atop a bright green channel marker. 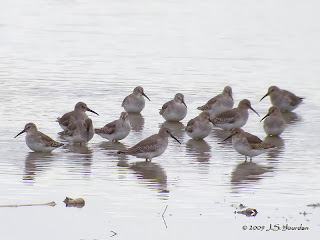 Checking out the bridge over Mouillee Creek I found a large flock of Rusty Blackbirds feeding along the muddied shoreline west of the bridge. On the east side of the bridge I found a flock of 20+ Dunlin feeding in the mud just below the bridge. I grabbed the scope and cameras and headed toward them. I was able to get a few digiscoped images before they flushed and joined another group of 10+ farther east along the creek. They soon returned, and I captured a few flight shots as they approached me. Unfortunately the birds were severely backlit by overcast skies, so their basic plumage was even more muted. 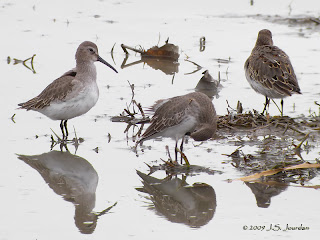 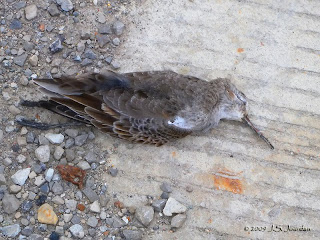 Sadly, I also found 4 dead Dunlin on the bridge. Its easy to guess that the flock flushed into oncoming traffic, since they barely clear the bridge when they fly across the road.

Just inside the turn at Roberts Rd. I found a pair of Eastern Meadowlarks singing atop a willow tree and in the grass on the other side of the quarry fence. Several Rusty Blackbirds were present, along w/ several hundred European Starlings. I was unable to get close enough for any photos. 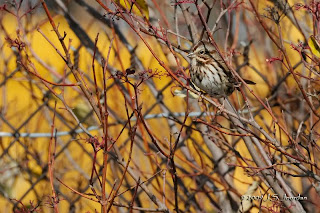 A quick stop at Sterling State Park yielded a few American Goldfinches and a Song Sparrow. I walked out onto the burm next to the lake, but the area was quiet.

A half-hearted attempt was made to look for the Scissor-tailed Flycatcher reported earlier in the week by Phil Van Daele. I drove west into Dundee and Milan, then headed home.