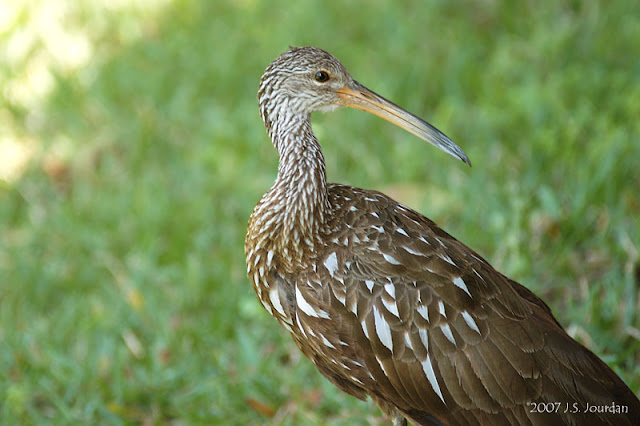 0930 Hrs. Landing at Orlando International Airport. The first birds to greet us are a pair of Wood Stork working the ponds alongside the runways. One even flies alongside the plane as we taxi toward the gate. Also seen are Cattle Egret, an Osprey, and several Coot. From the airport to the Disney Resort we also see Common Moorhen, Blue-winged Teal, Lesser Scaup, and Pied-billed Grebe.

1200 Hrs. 80F and sunny. We’re at Disney’s Coronado Springs Resort and have to wait ‘till 3pm to check in. Meantime, we decide to go to the Peppercorn Farm Market for a couple of beers and a pizza. A flock of Cedar Waxwing are working the palm trees in the parking area. A bus ride to MGM and a walk through the park yield the Great Movie Ride and a walk through the Muppet Store – we find a small Beaker statue. We then ride the bus back to the resort and check in. After a short nap, we go back down to the bus stop for a trip back to MGM.

1530 Hrs. As we wait for the bus, I thinkI hear Whooping Cranes flying overhead. I run around the corner and then hear the distinct calls of a Limpkin. And there, standing on the bridge just a few feet away, is a Limpkin just a'yowling. The bus comes, and I had no camera, so I have to take off. Just as we're boarding the bus I see a Swallow-tailed Kite soaring overhead. A walk around MGM and dinner at the Hollywood Brown Derby allow us to finally celebrate our 15th wedding anniversary. It is 8:30pm after we leave the restaurant and we head back to the resort and call it a night. 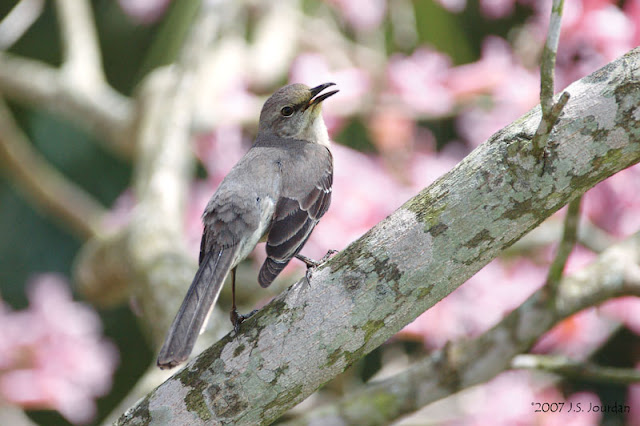 0730 Hrs. We have a Behind the Scenes Tour at Animal Kingdom. Our tour guide, Paul is from Utica and is a retired school teacher. He’s very well versed in the park’s goings-on and answers w/o hesitation all questions asked. I’m not allowed to take pics, so I have to put the camera away. I see a Catbird and Northern Cardinal before starting, as well as Boat-tailed Grackles, Cedar Waxwings, and White Ibis. A Sharp-shinned Hawk flies overhead before we enter the toursite. First stop is the elephant pen, and as we leave I hear the ‘kiddick-kick-kiddick’ of a Virginia Rail. We then see Great Blue Heron, and a flock of Purple Martin at the veterinary hospital onsite. Black and Turkey Vultures are soaring overhead. We take the Kilamanjaro ride and see Lions, Hippos, Elephants, Ostrich, Baikal Teal, Pintail, Lesser Pink Flamingo, and Cormorant. Giraffe, Leopard are also seen.

1400 Hrs. Back at the resort we walk around the lagoon, and I spot (3) Limpkin in the grass next to a pond. I follow them and get nice close-ups before running out of film. I also photograph a Northern Mockingbird and see a Palm Warbler. It is then that I realize I do not have any more CF cards, so I have to empty most of the pics I took during the day. As we take the bus back to Animal Kingdom I see the Swallow-tailed Kite again. We decide at the last moment to skip AK and hop off at the last bus stop before leaving the resort. We walk back and have dinner at the Maya Grill. Afterward, we head to the pool and watch a pair of Mallard swimming in the pool with the guests. I think I hear a Red-shouldered Hawk screaming, but now think it may be the S-T Kite(?).

0830 Hrs. Take the bus to Epcot today. We ride on the Planet Earth, and the GM Test Track, then lunch at the Chefs de France Restaurant. We walk back and have a nap. Dinner at the market, then back to Epcot. Ride the Seas, and Nemo tours. Mars Trip and Test Track again. Back to the resort. 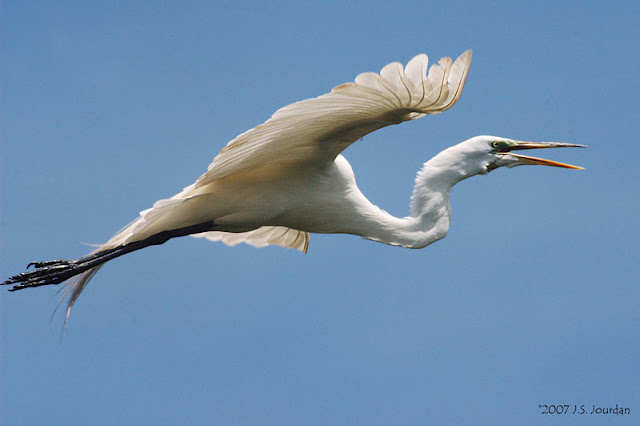 0900 Hrs. Today I’ve decided to leave the backpack and cameras in the hotel. Big mistake! As we walk out to Bus Stop #2 the Swallow-tailed Kite came soaring overhead just 20 feet over our heads! I could have had easy flight pics of it as it flew right over me carrying a snake in its talons! I am furious w/ myself!!! We take the bus to Downtown Disney and walk around there and the Disney Boardwalk. We then lunch at Mc-D’s and head back to the room. I walk back out toward the bus stop and check out the pond across the road. A Limpkin surprises me just a few feet away, but keeps running behing a tree w/ the sun at its back, so I have no picture opportunities. Across the pond I spot a Little Blue Heron working the shoreline, so I hide behind a tree and wait for it to come near. I get a few pics of it before it flies off. The next pond holds a Great Egret and (3) Moorhen. I get a couple of pics of the egret as it flies overhead. Afterward, we go back to MGM, do the Star Wars tour, and have dinner at the Sci-Fi Diner. We then decid to try the Tower of Terror! Great ride, and a great ending to a terrific Disney trip. 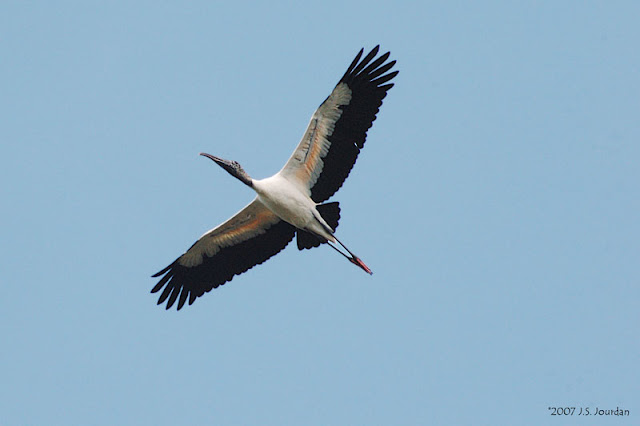 1000 Hrs. Taking the Magic Express back to the airport, and renting an Escape. Drive it to Lakeland to see Esther and Hal. By the time we arrive it is lunch, so we stop at McDonalds’ and pick up carry-out.

1300 Hrs. Its hot, 85ºF, and sunny, so I take a ride out to the Lakeland Cancer Center. As I drive into the parking lot I see a Loggerhead Shrike fly up from the grass and land in a tree. I'm able to get some closeups from the car before it flies off. Just then a Red-shouldered Hawk flies past, followed by a pair of Red-tailed Hawks. I grab the scope and head toward the ponds. Things are quiet, but I spot an Alligator sunning itself along the banks of the nearest pond. I take some pics of it before heading toward the second pond, where I had seen an Anhinga sunning itself along the far banks. As I approach the pond I notice a White Ibis along the near shore, and get several digiscoped images of it. I then spot another Alligator along the right side of the pond, completely out of water. I approach it and digiscope several more pics. From the edge of the property I can hear an Eastern Towhee singing its “Zreee” song. As I scope it I notice it has a bright yellow eye! Turns out the southeast race of Eastern Towhees have yellow eyes, while the Northern race has dark red eyes. I also manage several digiscoped images of American Coot, Northern Mockingbird, and Common Moorhen before seeing a pair of Wood Stork flying overhead. I get several pics of them with the D70, Sigma 400, and 1.4TC. An Osprey then flies overhead and lands in the tree over the first pond. I take some digiscoped images with the sun side-lighting the bird. 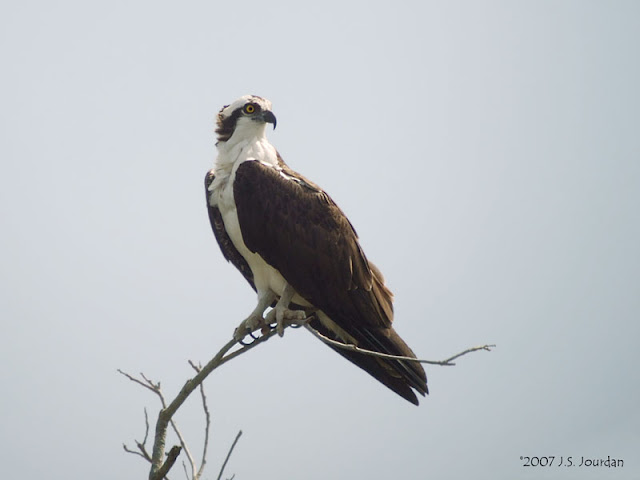 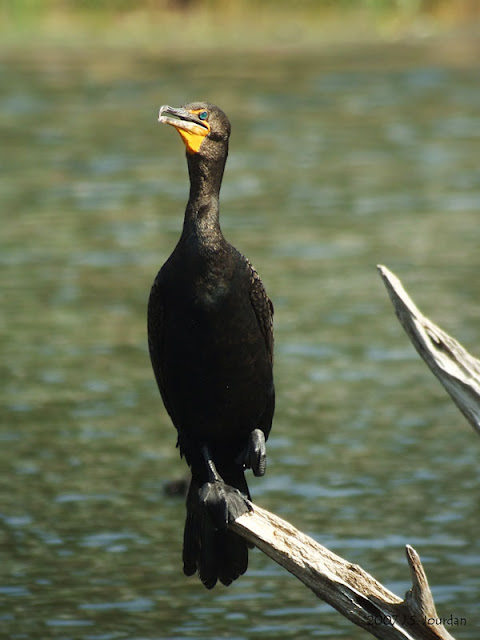 0900 Hrs. Opening day for the Tigers. Hal and I have a date w/ Ginger and Jerry at their camper. Beforehand, though, I spend a while digiscoping a Double-crested Cormorant sunning itself out in the pond of the RV Park.


0900 Hrs. Waiting to fly home. I Walk down to the pond and am able to photograph a Northern Mockingbird, see several White Ibis fly overhead, and hear a Prairie Warbler and Great-crested Flycatcher. Back near the clubhouse a White-winged Dove sits atop a light pole in the sun. A Eurasian Collared Dove is nearby on a powerline. Several Anole lizards are running about before I spot the GC Flycatcher in the trees over the Odom’s place. Time to head home!
More pics are available here:
http://www.pbase.com/jourdaj/orlando_lakeland07&page=all