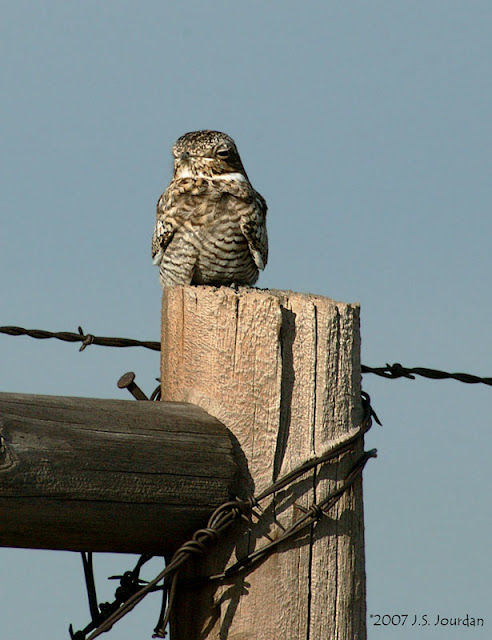 Robin and I traveled to Denver on 01-03 June 2007. She was there to attend a conference and me to chase western birds. Weather was gorgeous all three days with mostly sunny skies and temps in the low 80's.

With two full days to myself I wanted to make sure to optimize my time. So, I did some searching online for Colorado birding sites, I came upon a wonderful resource for birding Colorado by County. Top locations and target species are noted, as well as detailed directions for getting there. After perusing the counties surrounding Denver, I found references for the Pawnee National Grasslands in the northeast portion of the state (Weld County). Here I could find such species as Mountain Plover, Ferruginous Hawk, Golden Eagle, McCown's and Chestnut-sided Longspurs and Prairie Falcon. I marked a number of sites as waypoints in the software program MapSource and uploaded them to my Garmin 60C GPS unit.
We arrived at Denver International Airport on Friday afternoon. No sooner had we landed that I spotted my first of dozens of Western Kingbirds. Leaving the airport a Black-billed Magpie was seen perched on the side of the road.
A quick drive to Boulder Friday evening gave us views of numerous Prairie Dog Towns scattered along the highways and potential Burrowing Owl sightings. The Owl Loop just north of the DIA is home to a half-dozen Prairie Dog Towns and Burrowing Owl colonies and was a planned destination before trip's end.
02 June 2007
I decided to make Murphy's Pasture in the PNA my first destination, so Saturday morning I took the back roads of Denver and picked up CR-49 northward toward Weld Co. Taking care to avoid trucks traveling at 'autobahn' speeds I drove with the windows down and listened for the locals. A Western Meadowlark could be heard every 100 yards singing from the overhead power lines or the storage tanks that are visible everywhere. A beautiful male Lark Sparrow sang from a nearby power line, but flew off before I could back up close enough to photograph it from the car. A large pond held held numerous Mallard, Gadwall, Northern Shovelers, Double-crested Cormorants and Great Blue Herons. Fly-over Merlins and American Kestrels were nice additions. Hoping to spot Yellow-headed Blackbirds I was surprised to see that the roads were lined with Red-winged Blackbirds.
The highlight of this portion of the trip was an adult Swainson's Hawk perched atop a storage tank on the opposite side of the road. It paid no attention to me as I got out and took a dozen pics of it with the D70, Sigma 400mm, and 1.4TC. Setting up my scope to digiscope the bird, it suddenly took flight, and allowed me several close flight shots. The bright chestnut bib and dark underwings gleamed in the mid-morning sunlight. Several circling passes (2) (3) were made before it drifted out over the fields.
I arrived at the junction of state highways 14 and 392, and headed north on CR-77 to CR-96 and Murphy's Pasture. Along the way a Western Kingbird sat perched on some barbed wire and gave me nice looks from the back and front. Expecting to see tall grass prairies I was surprised to see large expanses of equally-beautiful short grasses and blooming wildflowers (2) (3) . Cruising slowly along the gravel road of CR-96 I quickly spotted several Lark Buntings singing and displaying their rich black bodies and bold white wing-stripes as they hovered 20-30 feet above the ground. As I watched them the first of several McCown's Longspurs took flight to hover, sing, and display for the females. I snapped off several shots, trying to photograph the Longspurs as they flew, hovered and drifted back to ground several yards from the car. Overcast skies made shooting difficult, and birds appeared mostly as silhouettes.
Almost as numerous as the Western Meadowlarks and Lark Buntings were Horned Larks, which twittered and chattered noisily from all directions. Interestingly enough, I found the song of the McCown's Lonspur to be sound surprisingly like a mix of the flutelike call of a Western Meadowlark and the twittering of the Horned Lark. A couple of local birders stopped by and inquired about my sightings. They informed me that Mountain Plovers are possible but rare sightings around here. They were searching for the more elusive Chestnut-collared Longspurs, which prefer the taller grasses of the region.


Travelling west along CR-96 I spotted a Burrowing Owl atop a fencepost, but it flew off before I could get within photographing distance. Across the road and several hundred yards away I was surprised to see a Common Nighthawk cruising slowly over the grassland.
The gravel road is lined with wooden fenceposts and barbed wire. Lark Buntings, Western Meadowlarks and Horned Larks are commonly perched atop the posts and make fairly easy targets to photograph. I quickly filled a 512Mb card with nice closeups of WM's and HL's, but accidentally re-formatted the card, losing everything I had just shot.
Heading west on CR-69 I got nice views of a Sage Thrasher, several Vesper's Sparrows and more Lark Buntings. A Northern Mockingbird posed briefly for me before disappearing in the only tree visible for miles. Farther down the road a family of Western Kingbirds (4 birds) chased each other along the fenceline of a farmhouse. At the corner of CR-69 and CR-63 a Ferruginous Hawk drifted several hundred yards out in the midday heat, far enough to track with the spotting scope at full power. A Swainson's Hawk flushed from a nearby tree, and I noticed a nest tucked away in a snag of branches. A Bullock's Oriole, Western Pewee, several Pronghorn sightings and a Jackrabbit later I decided to head back toward Denver.


Upset at myself for losing a card of images, I decided I would head back to Murphy's Pasture to get some pics of the McCown's Longspurs, Western Meadowlarks, Horned Larks, and hopefully some Lark Buntings. From there I would head north to Pawnee Buttes, and then back toward the DIA to check out the Burrowing Owl Loop.
Taking the most direct route, I headed north on I-25 to US-14 and headed due east to PNG. Along the way I caught a glimpse of a Common Nighthawk atop a fencepost, sleeping in the early morning sunlight. Pulling over, I took several pics from the car, then pulled out the scope and took several digiscoped images from about 20 feet away.
Arriving back at Murphy's Pasture I took several images (2) (3) (4) (5) (6) (7) (8) of the surrounding countryside with a Canon Powershot A620. As the sun began to rise, so did the McCown's Longspurs. A lovely male landed several yards up the road from the car, and I managed a couple digiscoped images before he resumed his aerial displays. A female appeared nearby, feeding in the short grass, and I managed a shot from the car window. A Prairie Dog town was spotted next to a windmill, but no Burrowing Owls could be found. As expected, I was able to get my photos of Horned Larks (2) and Western Meadowlarks, and finally got photos of the common, but elusive Lark Bunting. Satisfied, I headed toward Pawnee Buttes with the hopes seeing some Golden Eagles or Prairie Falcons.
Travelling north on CR-77 to CR-100 (E) to CR-89 (N) to CR-110 (E) to CR-95 (N) to CR-112 I finally arrived at Pawnee Buttes. Along the way I managed several more pics of both female and male Lark Buntings and even spotted an Eastern Kingbird eating a freshly-caught grasshopper. I couldn't help notice how much thicker the white tip was on its tail. I had also spotted another Swainson's Hawk fly overhead, and a Pronghorn (2) that took interest in my presence, allowing me some nice pics w/ the D70.
As the Buttes came into view I passed a ranch where I stopped for several minutes trying to ID a little brown sparrow. As I watched the sparrow a Burrowing Owl flew across my field of view and landed among several Prairie Dog burrows. Too far to digiscope, I was only happy to watch it from about 150 yards. As I arrive at the Buttes I spotted a Loggerhead Shrike on an overhead powerline. Seeing the Buttes up close I quickly realize that it will take much longer to find any good birds that I stay only long enough to take some photos. A windmill farm was situated atop the low hills, but was strangely inoperative. Nearby an 'old' cemetery entrance made for an interesting landmark.
Taking the most direct route back to the airport, I headed south on CR-390 to CR105 (S) to US-14 (W) to US-392 (S) to CR-555 (S) to US-37 (S) to CR-49 (S) to I-76 (S) to Picadilly Rd. Along the way were several neat rock features, but mostly just open rangeland.
At the airport I stopped at the first Prairie Dog Town and quickly found a pair of Burrowing Owls among numerous Prairie Dog mounds. Grabbing the scope and hiking across a field I got within about 100 yds of the owls and stopped along the edge of a barbed-wire fence. As luck would have it my Fuji F30 'died' just as I had a lovely owl portrait in my field of view. I had to settle for a couple of long-distance shots of some nearby Prairie Dogs with the D70/Sigma 400. Returning to the car, I decided to stop at a nearby culvert and photograph some Cliff Swallows flying in and out of their roosts.
Returning to the hotel via I-70 I spotted the Black-billed Magpie near the airport again.
Satisfied with myself and tired from logging about 250 miles I returned to the hotel and packed for home.