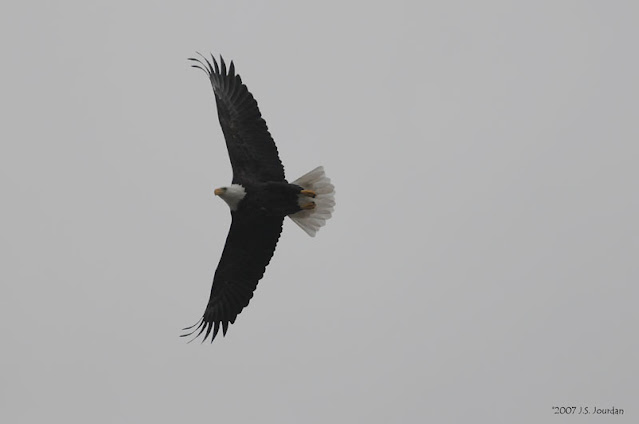 Saturday, 15 December 2007 marked the first day of the 108th National Audubon Christmas Bird Count, which runs through January 4th of each year. The Monroe, MI count circle celebrated this year’s count with mostly dark, overcast skies and high winds. But we managed to dodge the snow storm that would hit the rest of the state with a fury. In all we tallied 27,609 birds and 79 species. Overall numbers were way down from last year’s 395,615 birds, but this could be attributed to the lack of late afternoon black bird swarms and lack of lake ducks (mostly Scaup sp.). Our 79 species almost matched last year’s total (82) that put us #1 in the State of Michigan. The following is a summary of my day, with stories overheard from other participants. I wish I could share more of others' stories, but I was too busy compiling results at dinner time to listen more intently…

0600 Hrs. Cloudy, overcast, windy. Temperature 27ºF, winds ENE 10-20 mph. I was supposed to meet Allen Chartier, Will Weber, Chuck Owens, Ted Harms, and Karl Overman at the Whiting Power Plant in southern Monroe Co. at 7 am, but was in Monroe a bit early. So I made a quick stop at the boat ramp in Sterling State Park and decided to try to a bit of owling. Not five minutes went buy before I heard a Screech Owl calling from a short distance away. I called back to the bird for the next 10 – 15 minutes, but could not see it against the dark skies. It’s amazing how ‘bare’ the tree branches appear against the dark skies until you try to shine a flashlight. The owl flew around me a few times, as I could hear it from different directions, but I failed to see it. Still, a great way to the start the day! 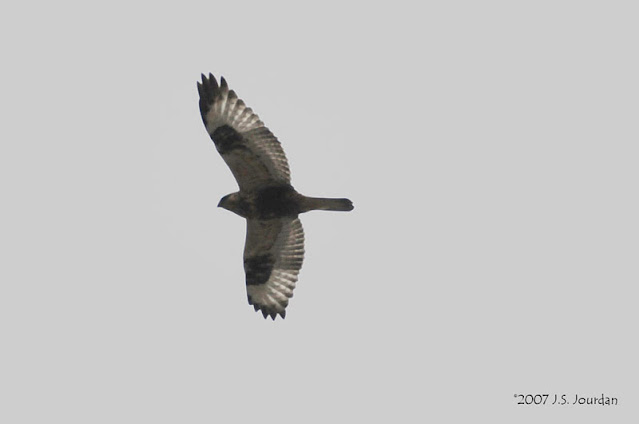 0700 Hrs. The wind was really blowing this morning. A major storm warning was in effect for the entire state and you could sense that it was only a matter of time before it’d be snowing. After meeting w/ site security we headed down to the Lake Erie shoreline start counting gulls. It was still dark when reached the water, so Chuck, Karl and I headed into the woods to look for owls. We had no luck – it was too windy to hear anything. We did pick up a pair of White-throated Sparrows, Cardinals, and Tree Sparrows. A fly-by Bald Eagle was one of the first birds we saw over the lake. Heading back to the beach we caught up with Allen, Will and Ted, who had already seen an Eastern Bluebird, two Bald Eagles, and a Lesser Black-backed Gull. Scoping the discharge of the power plant we spotted several Great Black-backed Gulls among the mostly Herring and Ring-billed Gulls. A single Bonaparte’s Gull was also spotted. A few Common Goldeneye were flying across the horizon, but otherwise the lake was surprisingly empty. With white-caps and and the strong winds we expected as much. The GBBG’s were aggressive toward each other and to the smaller Herring Gulls, which they physically drove away by flying directly into them with their chests bared and wings-a-flappin’.
Hiking up the bank we scoped the discharge canal and spotted numerous Mallards, a possible Hooded Merganser, and a pair of Black-crowned Night Herons roosting along the shoreline.


Heading south along the service road we spread out across the open field hoping to scare up some Horned Larks, or better. Nada. I heard a Carolina Wren along the shoreline, and attempted to call it in w/ the iBirdPod, but had no luck.


Down around the corner we flushed some Canada Geese, Great Blue Herons, Black Ducks, and Mallards. A small flock of Northern Shovelers were a nice surprise.


Returning to the lake, we watched a pair of immature Bald Eagles soaring in the distance. As we hiked the beach southward toward Woodtick Peninsula Allen spotted a Rough-legged Hawk off in the distance, and moving this way. I would get the chance to put my brand new Nikon D300 into use with my favorite hawk flying toward me. Firing away at 6 fps I managed several keeper shots of the light-phase bird as it passed overhead against the heavily-overcast skies. Failing to see any birds as far as we could see, we turned around and headed back toward the power plant.


Walking back along the service road we saw the Rough-legged Hawk again, this time hunting the open grass out to the west. A Red-tailed Hawk and another Bald Eagle passed by in the distance before we returned to the cars. Karl and I took our leave of the group and headed off toward the Monroe Power Plant. 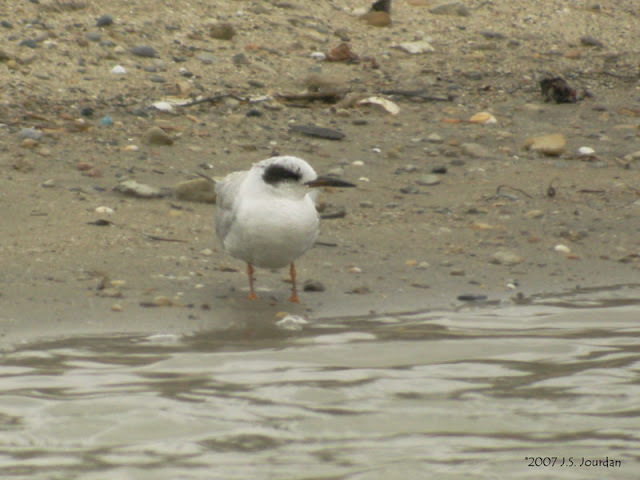 1200 Hrs. Arriving at the Power Plant I met up with Tim Walsh, Tom Gere, and Jerry Olson. Tom quickly pointed out the pair of roosting Peregrine Falcons up on the plant roof. One bird was roosting out in the open on a railing, while a second bird was barely visible a few feet higher on a protruding girder. Tim pointed out a Belted Kingfisher roosting along the warm-water discharge canal, and while I attempted to digiscope it the bird flew off. An immature Herring Gull was quietly resting a few feet away from us, and made for an ok consolation prize. Once Matt Shackelford arrived, we piled into the company Suburban and headed down the road alongside the canal. Karl had come hoping to see a Great Egret, and quickly spotted three birds flying south along the canal. A bit farther down the road we spotted one egret on the far bank, and stopped to digiscope it for the records committee. It was too windy to get a decent digiscoped image, so I took a 30-second video of it through the scope.

The canal hosted mainly Herring Gulls, but we soon came upon flocks of Bonaparte’s Gulls, roosting Bald Eagles, Great Blue Herons and Double-crested Cormorants. At one point I counted 54 Great Blue Herons roosting along the far bank in a hundred-yard stretch.

Bald Eagles were a bit more difficult to count, but we managed to see eight birds flying together at the end of the canal. While Karl counted Bonaparte’s (2) and Ring-billed Gulls , Matt pointed out some of the features of the canal and wildlife habitat being developed there to Jerry and Tom. Tim would be retiring from DTE in just 5 days, so we think he was relishing his last ‘official’ CBC count.


We then headed back out to the lake along the Raisin River, where we counted 17 Hooded Mergansers and more Bald Eagles. One adult bird made a nice flyover, and allowed me to get full-frame images from a variety of different poses, (2). The mouth of the river was active w/ dozens of Great Black-backed Gulls (mostly immature birds) flying along the shoreline. The waves crashing against the shoreline (2) reminded me of the north shore of Hawaii (just a lot colder). In some locations ice covered everything!


Scoping the lake yielded few ducks. A single Bufflehead and six Common Goldeneye were the only birds we saw. A fly-by Hooded Merganser was a nice consolation. As we headed eastward along the lake we continued to be amazed by the numbers of GBBG’s, Herring and and Ring-bills.


Back at the mouth of the discharge canal we watched 70+ Great Blue Herons flush from across the Lotus marsh.


As Tim and I reached the mouth of the canal on foot, we spotted a Forster’s Tern flying low over the water. The tern landed on the shore for a rest, and gave us great looks through the scope. I took dozens of digiscoped images and a couple of short videos. A great bird for this late in the year! 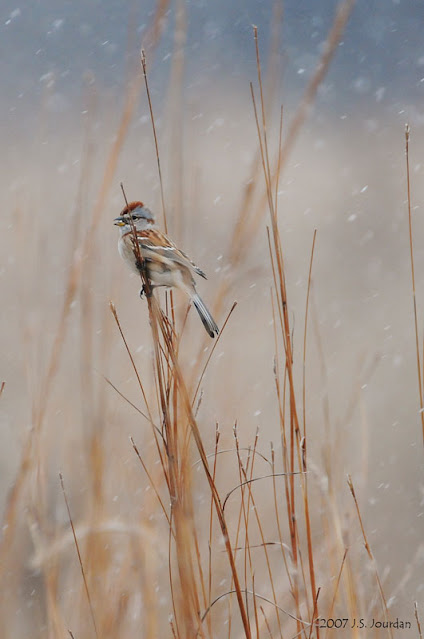 1500 Hrs. Tim, Tom and Jerry had to end their day, so Matt, Karl and I drove over the fly-ash onsite. As the snow began to fall, we arrived at the gate along Dunbar Rd. and I quickly spotted a Northern Harrier at the top of the burm directly in front of us. We drove up the bank to look for it, but did not see it. Phragmites covered a large portion of the 500+ acres of restored habitat, but open water allowed us to see a couple dozen Canada Geese, Mallard, and more gulls. Driving back down the hill Matt took us to his new ‘native grassland’. The three of us waded into the shoulder-tall grass and scared up a minimum 300 Tree Sparrows. Karl and I both saw Field Sparrows, Swamp Sparrows, Song Sparrows and Dark-eyed Juncos among the hundreds of Winter-Chippies. Wishing we had a few hours to bird this area, we had to leave as darkness and snow was now upon us. Leaving the area we re-spotted a Harrier, and I managed to get a few flight shots from below the burm where it hunted. Our last stop along the fence yielded a couple dozen Tundra Swans, Mute Swans, Mallards, and at least 250 Bonaparte’s Gulls!

1700 Hrs. Dinner at the Michigan Bar and Grill. As folks started to drift in for dinner, so did the stories! Lucy Pentz, husband Gary and Marje Achinger (along w/ Kathy and Dennis Rohmeyer) happily reported 33 Horned Larks and 50 Snow Buntings in Area 3 among their highlights. Jack and Janet Volker, along w/ Dan Schwab counted a whopping 54 Bald Eagles at Sterling State Park! Tom and Maureen Lakin, Anne Smith, and Jackie Copeland had a Northern Shrike, and reported a Red-necked Grebe in the Raisin River across from St. Mary’s Academy (Area 5). Bob Pettit showed me a photo he had taken of an immature Northern Goshawk just south of Raisinville Bridge, west of the County Library between N. and S. Custer (Area 7). They also saw 60 Cedar Waxwings at Monroe County Community College. Jan Morrow, Jeanine Roberts and Mollie Wood had 240 Snow Buntings on Victory Rd and Summit St. in Area 4. Barb Liedel and Diana Meyer had a banner raptor day: 9 American Kestrels, 2 Bald Eagles, 2 Northern Harriers, 1 Cooper’s Hawk and 2 Red-tailed Hawks in Area 8. Allen Chartier, Will Weber and Ted Harms had 4 Lesser Black-backed Gulls and 1 Northern Shrike in Area 2. Allen managed a nice photograph in the late afternoon low light!


Despite the dark and windy day we had a most successful day! Special thanks to the good folks at Michigan Bar and Grill for being such gracious hosts, to Matt and the folks at DTE for permission to bird the power plants, and to my Area Leaders for helping me coordinate this year’s count.

Here are totals by Area, and overall (below): 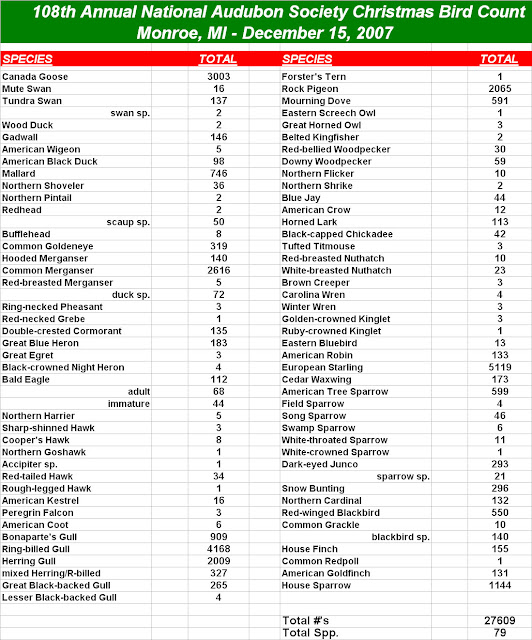