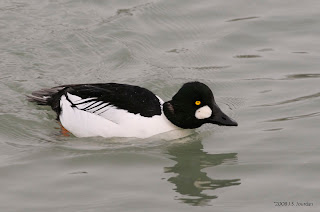 I took a quick run down to the river again after work to see if any new birds were about. Stopping at the foot of Perry Pl. I spotted a young male Canvasback drifting near shore. I managed a few pics before he moved out of view. Heading down to the foot of Southfield I set up the scope to shoot a video of the duck raft out in the middle of the river. Its been overcast and a bit dark today, so I wasn't expecting to use the D300 much. As I scanned the ducks, I noticed a male Goldeneye appear near shore about 20 yds north from where I was standing. I waited until he dove, then ran toward it hoping to grab a few shots w/ the D300. It reappeared, then continued to swim toward me, giving me some wonderful views (and shots) before it flew off.
Returning to the scope I had a fly-by Common Merganser female, and just before leaving I digiscoped a short video of a Great Black-backed Gull drifting by on an ice flow.