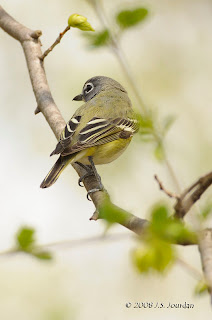 With all of the wonderful warbler pics being showcased by fellow birders I felt a bit left out, so I fired up the D300 and SB-800 flash and headed out to UM-Dearborn's Natural Area to look for warblers. I'd done a bit of research on the flash and found information regarding the Auto High Speed Sync and decided to try it on the camera (put the camera on Aperture Priority and the flash on [AA] with "0" compensation. I tried it out in the lab beforehand and found that it seemed to work wonderfully for stopping action and providing correct exposures, even though the maximum shutter speed was 1/250 sec. 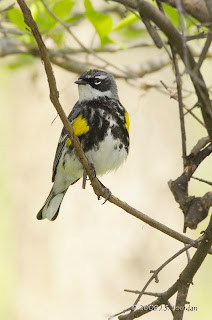 So, I hopped on the Vespa and headed over to UM-D after work and made a quick walk down the Lakeside Trail toward Jenson's Meadow. I soon came upon a nice male Yellow-rumped Warbler and quickly remembered how impossibly hard they are to photograph. Autofocus is fast, but too many branches requires the need for manual focusing. Unfortunately, its difficult to get focus accurate this way. The nice thing about the flash, though, is the ability to get a strobe effect while taking multiple pics in Continuous High mode. At 0 Comp. on the flash, the majority of images were slightly on the bright side, so future images will be taken with a -1/3 to -2/3 comp.

Just before the gate to the meadow, a White-throated Sparrow appeared (one of many skulking scratchers) and I managed a quick photo. Palm Warblers were the only other warblers about at this time, and the trail was very quiet. The Hawthorne bush at the edge of the meadow had a lovely Chestnut-sided Warbler, and I tried my best to capture a pic or two as bounced in and out of view. 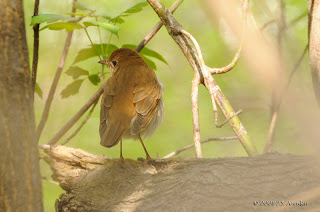 Heading into the Rose Garden a Veery flew into the woods a few feet, and all I could manage was a shot through the branches. The sun on the exposed bird gave it a wonderful glow, however. Along the fenceline a Northern Flicker basked in the sunlight for a few moments and I enjoyed watching it for a few minutes before it moved on.

Returning back to the Lakeside Trail another Yellow-rump appeared, followed by a lovely Blue-headed Vireo. The vireo stayed between me and direct sun most of the time, so I was happy to have the flash to provide fill. Otherwise all I'd have are silhouettes of the bird. It finally flew across the trail and I managed a couple pics as it stopped briefly in the open. A Gray Catbird popped his head up just long enough for another shot through the branches.


A Ruby-crowned Kinglet chattered noisily in the alders, but never came into the open.


As I returned toward the Interpretive Center a Northern Cardinal sang loudly in the open. White-throats were in abundance near the feeders on this day, and on May 1st would be joined by several singing White-crowned Sparrows.


Returning on the 1st of May I saw more Palm Warblers, a singing Nashville Warbler high in the trees along the Meadow, and in the Rose Garden had a pair of Black-and-White Warblers and a flock of Yellow-rumps. All were too far away to bother photographing.


The ever-present Black-capped Chickadees were fun to watch, and a mating pair of Downy Woodpeckers did their duty out in the open. 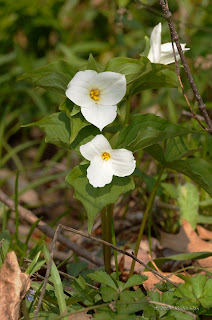 Painted Turtles sunned themselves out in the lake and made nice subjects for fill flash, as did the many White Trillium that are blooming along the trail's edge. The Marsh Marigolds at the north end of the lake finally opened today, and provided a nice macro shot w/ the 400 mm.