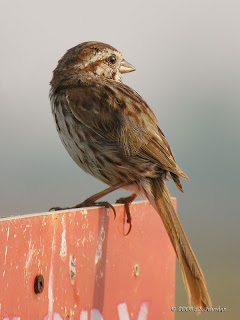 I had a pretty productive morning here at the Moo despite only biking for about 2 hours. Marsh Wrens were quite vocal in the SW corner of Walpatich Unit, and more Lesser Yellowlegs are beginning to show up on their journey southward (I counted 10 in two separate flocks). From the Middle Causeway I took the dike between the Bloody Run and Long Pond Units toward the North Causeway. About half-way there I spotted a Baird's Sandpiper in the unplowed field across the ditch to my left. 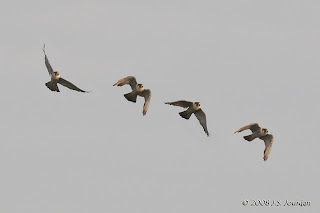 A short distance further, a large raptor took off from the field, and after first thinking it was just a male Northern Harrier, it turned out to be a Peregrin Falcon. I managed a few flight shots as it headed west, then turned and flew back east into the rising sun. It disappeared somewhere over the Banana Unit.


Returning back along the dike splitting Long Pond and Vermet Units I heard, then saw a Short-billed Dowitcher circling overhead and landing in the Long Pond. I was unable to digiscope it due to the phragmites growing so tall along the dike. Several pairs of Green-winged Teal in the SW corner of the Vermet Unit were too spookish for any photos, and flew off before I could approach within 100 yds. It was quite windy and warm this morning so digiscoping was quite difficult. 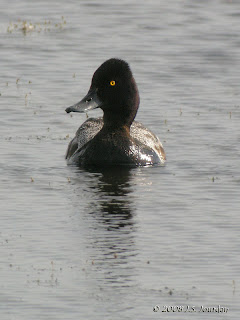 Cell 3 was quiet save for a few Herring Gulls and Caspian Terns. Returning down the Middle Causeway I stopped and scoped the Osprey tower, where two fledgling chicks were spreading their wings and getting ready to attempt flight. One adult was with them, while the other was out fishing in the Lead Unit. A young Lesser Scaup was swimming nearby and allowed a few digiscoped images. 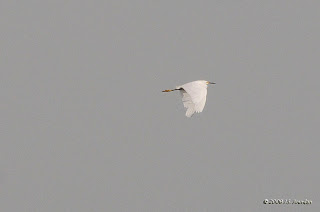 As I practiced flight shots of fly-by Black Terns (adult and immature) a Snowy Egret raced by from the Lead Unit to the sand spit in the Vermet Unit. I managed a few flight shots as it passed by in the distance, but it landed too far away to digiscope.
Heading back to car I ran into Mary Trombley and her family. She and her dad were scoping out one of the Black-necked Stilts in the SW corner of the Long Pond Unit. After a quick chat I returned to the car, just as the forecasted T-showers moved in...