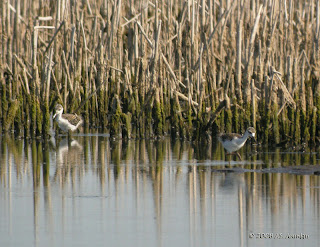 Looking to get a good workout this morning I grabbed the bike and headed to the Mouillee Creek entrance at Pt. Mouillee. I arrived at the parking lot around 8am and headed up the Middle Causeway. A Green Heron flushed from the Walpatich Unit and flew by with several Tree Swallows in tow. 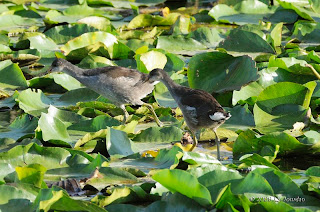 As I attempted a few flight shots in the early morning light I spotted movement out on the lily pads covering the pond. Three baby Common Moorhen were feeding and running about, and provided a brief digiscoping opportunity. With mom nearby they fed on snails while another baby posed nicely on a bare snag near the cattails. A lone Marsh Wren chattered somewhere in the distance. 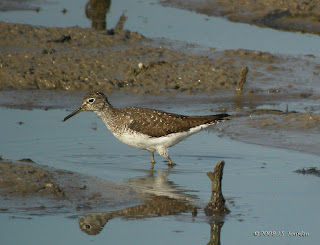 Riding along the dike separating the Long Pond from the Nelson Unit I spotted a Red Fox watching me intently from the edge of a corn field across the channel. It took off when I slowed down and didn't stop running 'till it was 100 yds away. The Long Pond was completely dry along the west side, but pretty active along the north shore. A number of Lesser Yellowlegs were feeding alongside Pectoral and Solitary Sandpipers. One Solitary Sandpiper was close enough to provide a half-dozen nice digiscoped pics. 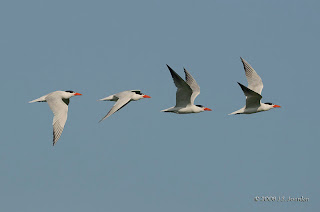 As I made my way along the North Causeway toward the Vermet Unit my front tire exploded and converted my morning ride into a towing session. Lucky for me I wasn't somewhere in the Banana Unit or it would be a 'lonnnng' walk back to the car. So, with bike in one hand and camera in the other I walked along the dike between Long Pond and Vermet Units. The Vermet was quiet with only a few Caspian Terns roosting out along the sand spit. At the SE corner of the Long Pond some water was still present and I quickly spotted one of the Black-necked Stilts. Several Short-billed Dowitchers were feeding among the stubble a few feet away, but lighting did not permit worthwhile photography. 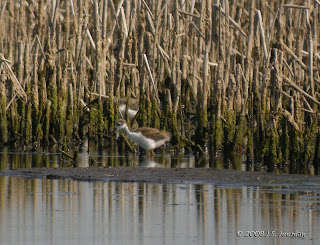 The Stilt was quite actively chasing anything that came within the vicinity. And for good reason! Just nearby one of the baby stilts was feeding along the edge of the cattails. As I scoped the birds I was greeted by Scott Jennex who had just arrived. As I digiscoped the Stilts from a distance Scott spotted a 2nd then 3rd baby feeding within a few feet of each other. I managed a couple pics w/ 2 of the babies together, but the 3rd stayed just inside the edge of the cattails. One of the young Osprey flew by w/ a nice White Bass in its talons.

After a short time we headed back toward the cars and some relief from the heat. Patricia Gamburd appeared and joined us and together the three of us walked back to the parking lot. Along the way we spotted Cedar Waxwings, Yellow Warblers, and got some nice pics of several Blanding's Turtles. I didn't get the bike ride in, but I did get a nice workout walking the bike!