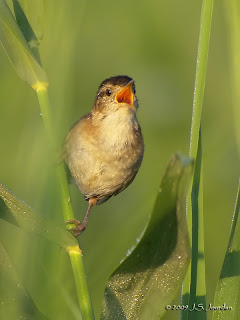 I was in the market for a new digiscoping camera after having dropped my Coolpix P5100 last weekend. I was going to try to get a new P5100, but the only units available were on eBay, and I didn't want to play bidding war for a camera with an unknown history. So I opted to order a new Nikon Coolpix P6000 from Amazon.com. It arrived Thursday afternoon, so I was anxious to break it in. I decided to go to Pt. Mouillee early Friday morning to give it a try.


I parked at the Mouillee Creek entrance at 6:30 am and rode up toward the Walpatich and Lautenschager Units. Along the way I counted at least six different Swamp Sparrows singing in the marsh, and heard several Marsh Wrens. Tree Swallows were abundant in the phragmites. I scared up four Green Herons in the Walpatich Unit, along with a dozen Wood Ducks (adults and chicks). A Willow Flycatcher was singing nearby in the willows(?). 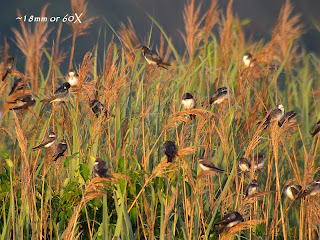 I rode over to the pump house and found a large roost of Tree Swallows in the phragmites along the far shore (about 50 yds. away). I snapped several photos w/ the D300 and Sigma 400mm f/5.6, then attempted to digiscope the birds w/ the new camera. It was still early in the morning, so I needed the self timer. I took several images at different magnifications. The camera focused well and the viewfinder was bright. 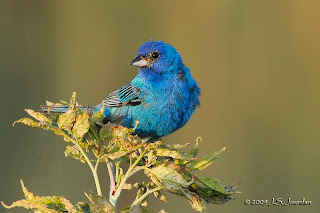 Just before leaving, I noticed an Indigo Bunting bouncing around the shoreline. I readied the D300 in case the bird popped into view, and was rewarded with a close view just a few feet away. I fired away several frames as the bright blue male bird posed for several seconds, then flew away.


Birders who veer left off the Middle Causeway toward the large pond across from the Bloody Run Unit should be aware of the massive sink hole in the middle of the trail. The hole is marked w/ a sawhorse marker, but the ground looks unsteady surrounding it. Take care when crossing, and stay to the extreme right. The hole itself looks to be 20 ft deep! 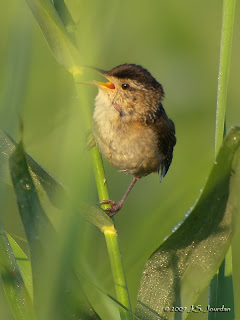 As I approached the junction of Long Pond, Lead and Vermet Units I heard a Marsh Wren in the cattails to my right. A quick play of the iBirdPod brought the bird into view, and allowed me to capture several frames w/ the D300 and several digiscoping. The P6000 did a nice job of focusing on the bird, despite it swaying in and out of view behind grasses.
A family of Pied-billed Grebes were out in the Lead Unit, and I attempted to digiscope them using the self-timer, but they were too far away for acceptable image. I did stop to attempt to digiscope the Osprey family way off in the middle of the Lead Unit. I put the camera on 4X, and the scope on 60X, and used the self-timer. I managed to capture an acceptable image that showed 1 adult and 3 young on the tower, with the 2nd adult on the rail below the nest.
A ride up to the Banana Unit produced a pair of Stilt Sandpipers amond a dozen Lesser Yellowlegs in Cell 3. Water/sludge was actively being pumped into the cell, so that the shorebirds were almost half-way out into the Unit. It won't be long before we are scoping the birds from the extreme south end of Cell 3. 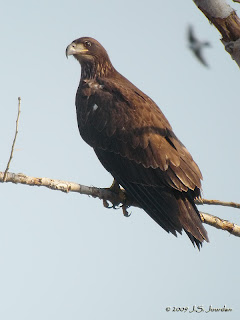 Heading north along the dike I found a juvenile Bald Eagle in the dead Cottonwoods just north of Cell 4. The bird was severely side-lighted, but I was able to get close enough to capture a few nice digiscoped images. 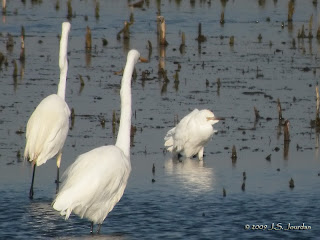 Out in the Vermet Unit several dozen Great Egrets were feeding together. Among them were an adult and juvenile Snowy Egret. The juvenile bird produced some confusion because its profile was very similar to a Cattle Egret. But opinions from other birders (Thanks Matt, Alan, Bruce, Brian) convinced me that I was seeing a Snowy. The young bird had a dark blue-gray bill with yellow at the base, which is common for both Snowy and Cattle Egrets in their first summer. 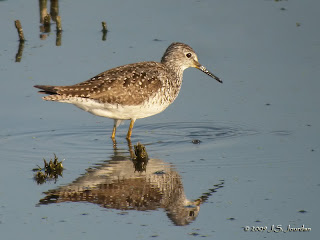 I also spotted numerous shorebirds along the east shoreline of the Vermet Unit. Mostly Lesser Yellowlegs and Short-billed Dowitchers, but I did find one Stilt Sandpiper and several Least and Semipalmated Sandpipers. Brian McGee reported a Wilson's Phalarope just a short time later in this same area. 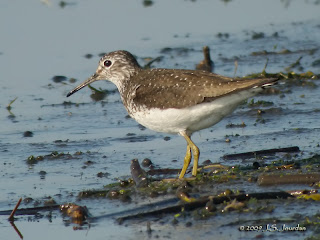 The NW corner of the Vermet Unit produced a Solitary Sandpiper that was close enough to digiscope, and further on in the Long Pond Unit a Spotted Sandpiper was cooperative enough for several photos. A Great Blue Heron also posed nearby for a few images, before I headed back to the car. I was also too slow to capture a pair of Caspian Terns flying overhead - an adult and juvenile - that would've made for a nice reference image.

I'll be writing up a review of my experiences with the Coolpix P6000 in my digiscoping blog shortly. Stay tuned!