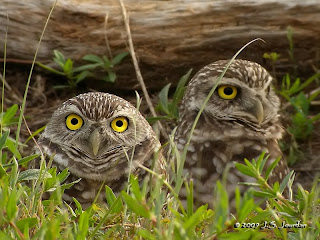 Robin and I flew down to Ft Myers, FL for a weekend visit with little sis, Dr. Michelle Jourdan. We arrived at Southwest Florida International Airport around noon, got our rental car, and then drove to Big Al's Sport's Bar for lunch. Afterward, I wanted to drive to Cape Coral to look for Burrowing Owls since Michelle wouldn't be off work 'till late afternoon. Our best bet for finding the birds would be the Library just off Mohawk and Skyline Dr. 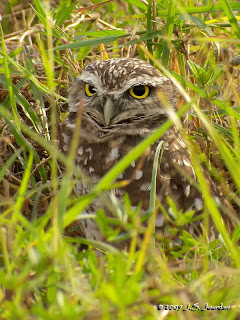 And sure enough, we arrived just before 3pm and promptly found one little owl poking its head out of a burrow several yards from the road. I grabbed the scope and proceeded to digiscope the bird, since I didn't want to disturb it by approaching too closely. 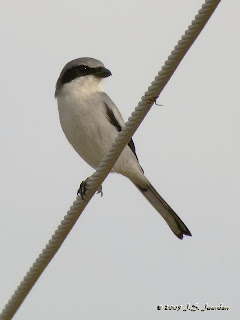 I stopped momentarily when a Loggerhead Shrike appeared on the overhead wires across the street. I quickly moved to within 20 feet of the bird and managed a few digiscoped images before it took off to catch some prey in the grassy field nearby. 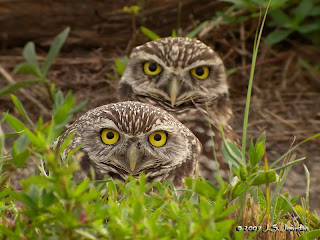 Returning to the owls, I took dozens of images before heading along the street to the next colony. Sure enough, a pair of birds were sharing a burrow, and provided a nice opportunity for more digiscoping. These birds were closer to the road, but low enough in the grass that I had to move back to shoot over the blades. The little one in the front had the widest eyes I'd ever seen! The bird behind it seemed to half-asleep despite my presence. 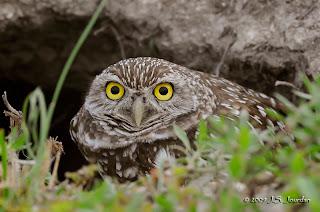 After a few quick photos w/ the D300 and Sigma 400mm f/5.6 I packed the gear up and headed toward the ball park a few blocks away. I was now looking for Monk Parakeets. Within minutes we were greeted by the chatter of dozens of birds flying into the light towers surrounding the outfield where their nests were found. 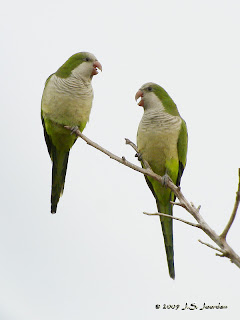 I walked out to the middle of the field and found a tree filled with birds. The late afternoon sun was behind clouds, so the birds were severely backlit by white clouds. I managed to grab several dozens of digiscoped images before they flew off. 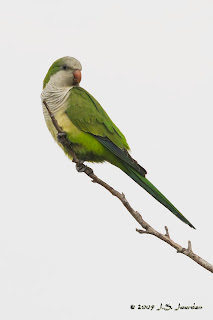 Patricia R Gamburd said…
Great Shots Jerry. I'll have to remember Cape Coral and where to go when I go to Fort Meyers next March/April
November 25, 2009 at 9:48 AM