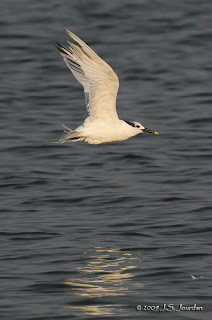 After a hearty, homemade breakfast Dr. Michelle, John and I left Robin behind in the condo and headed toward Sanibel Island and J.N. Ding Darling NWF. As we exited the condo grounds we checked the large dead tree on the road side for any interesting birds and found it empty. Last night we had spotted a Great Horned Owl perched in the open, but didn't have a camera to photograph it in the twilight. 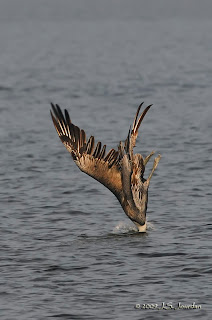 We stopped along the beach just before the bridge to Sanibel Island. Out in the water Brown Pelicans and Laughing Gulls were diving and feeding on schools of fish. Fly-by Sandwich Terns made for some nice flight photography. I managed a few keepers before turning my attention to the pelicans. Despite their size I was having difficulty tracking their dives. At one point I found a pair of Laughing Gulls squabbling over a perch atop one of the swimming pelicans! Other fly-by birds included a Willet and more Brown Pelicans. 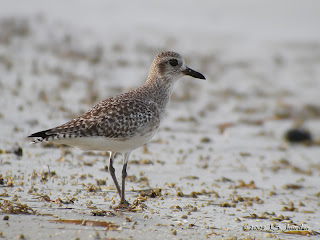 A few shorebirds were nearby, so I stopped to grab photos as they headed my way. I managed a couple digiscoped images of a Black-bellied Plover in basic plumage, and a Sanderling. A Dunlin feeding with them was moving too quick, so I needed the D300 to capture it. 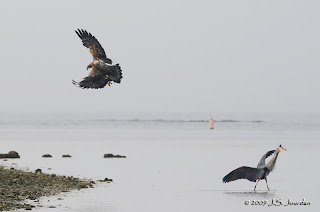 As I followed the birds toward the bridge, a Bald Eagle flew in from the east shore and made a close pass near a startled, and upset, Great Blue Heron. The eagle landed on shore for only a few moments, then flew toward me and landed overhead in a palm tree. I walked nonchalantly past the tree, whistling to myself, minding my own business, hoping to get a better angle on the bird. As soon as I stopped and turned around the bird took off and headed low over the bridge, giving drivers a nice thrill. It disappeared over Sanibel Island. Several dolphins appeared nearby and slowly surfaced for several moments. I managed only a couple shots as their dorsal fins appeared above water.

We returned to the car and drove over the bridge to Ding Darling. As we drove in along the wildlife drive we passed several dried carcasses of Horseshoe Crabs. We met a volunteer who had just spotted seven Hooded Mergansers swimming along the mangroves about 50 yds away. As we scoped the birds a Roseate Spoonbill flew in and landed near them. On the other side of the road we found a dozen or so American White Pelicans swimming out from the mangroves. 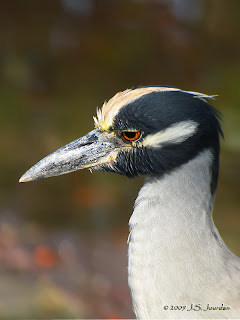 As I walked along the road, John and Michelle spotted a Yellow-crowned Night Heron feeding next to the road. I approached and was able to take dozens of images at point-blank range. The bird was even cooperative enough to allow me to set up and digiscope. Beautiful bird!

A bit farther up the road we came across a nice flock of Blue-winged Teal, Roseate Spoonbills, Willet, Reddish Egrets, Little Blue Herons, Tri-colored Herons, Black-bellied Plover, and Short-billed Dowitchers.
Unfortunately the sun was behind the birds so digiscoping was less than optimal, so we continued on. 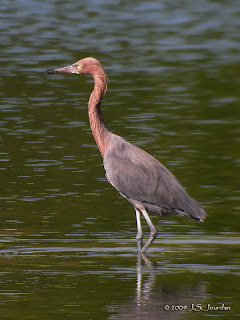 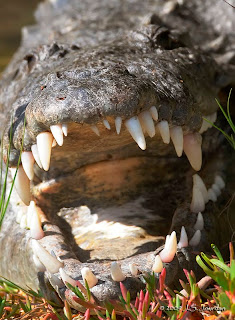 A large crowd had gathered up ahead of us so we drove up to investigate their sighting. We were greeted by a 13+ foot Crocodile sunning itself on the side of the road with its mouth wide open! Zoinks! A pair of wildlife agents were standing nearby to make sure noone approached the old lady, estimated to be 70+ years old and the largest croc on the island. I took dozens of photos before she finally closed her mouth and went back to sleep. Beautiful animal. 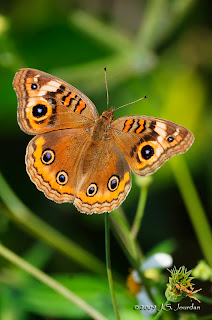 The title of this blog should've read "Buckeye Saturday" since it was the annual Michigan - OSU football game. I had photographed a small flock of butterflies feeding next to the road and had to research in order to identify them. Tropical Buckeyes! After leaving Sanibel we had picked up Robin and drove to Fort Myers Beach and had lunch at a beachside restaurant. The game was on, and we were forced to sit with a group of OSU fans decked out in game jerseys. Turns out the entire bar was filled w/ 95% OSU fans. Bad day for us... We taunted them w/ "Wait 'till next year!"

Wonderful variety of captures you must have been like a Kid in a candy store with all the different wildlife opps!
November 28, 2009 at 5:16 AM

bathmate said…
As always an excellent posting.The
way you write is awesome.Thanks. Adding more information will be more useful.