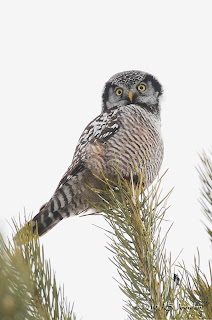 After missing last weekend's WPBO outing to the Soo I knew that this weekend would be my only chance this winter to get up the Upper Peninsula to see the Northern Hawk Owls (5-6 birds) and numerous Snowy Owls being reported in the Rudyard-Pickford area. So, I drove up to the condo in Central Lake late Friday night with the idea of heading across the Mackinac Bridge before dawn on Saturday morning. Lucky for me folks like Jim Patton and Jason Bojczyk had just posted their sightings from the 22nd, so I had a good chance of seeing at least one of my target birds on Saturday.

I woke early Saturday morning and headed through Petoskey toward the bridge. A skunk ambled across the road in front of me and safely made it to the woods. I crossed the bridge around 7 am and found the skies relatively clear. Unfortunately they gave way to heavy clouds and a light mist by 7:30.

As I traveled M-134 east toward M-129 the first birds of the day appeared: American Crows and Northern Ravens. A Black-capped Chickadee would be the only other bird seen before the Pickford Area (M-48 / M-129). Roads were clear, but fields were snow-covered (~3-5"). Temps were in the low 20's. As skies began to brighten the winds began to pick up. I had hoped for better weather but would have to make do w/ current conditions.

At ~9 am I spotted my first of 3 Northern Hawk Owl on Hancock just north of 23-Mile Rd. (south of M-48). The bird was perched atop a birch tree in a stand of woods approximately 100 yds. to my right. I was fortunate that a Raven perched next to it had gotten my attention since it appeared so small at such a distance. I took several photos with the Nikon D300 and Sigma 400mm and a couple of digiscoped images just for recordContinuing east on M-48 just past Pea Line Rd. I remembered Jason's post of a Hawk Owl at this location. Sure enough, just north of M-48 on Pea Line a 2nd Northern Hawk Owl was perched atop a pine tree next to the road. Woo-hoo! I stopped at a distance and took several photos w/ the D300, and decided to try to digiscope it. With the winds picking up and skies still a bit dark, I decided instead to take a video through the spotting scope. I made sure to adjust Exp. Comp. to +1.3 to make sure the owl would be more than just a dark silhouette. I marvelled at how well the bird could sway its body with the wind and keep its head perfectly still while it scanned for prey in the nearby fields. 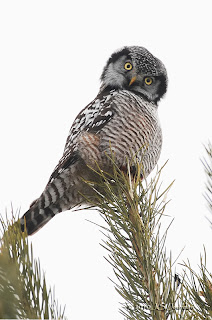 After a few minutes of video I approached the bird and was able to get directly below it. I took more images while lying in the road (on my back) as the bird scanned left and right, and sometimes pausing to consider my presence. It paid me little attention and continued its lookout, so I set up the scope and attempted to take some digiscoped images . The nice thing about digiscoping is the ability to get good images w/o approaching too closely. I had noticed foot prints in the grass on the resident's property made a mental note to WARN folks about trespassing and approaching these owls too closely! After I took my photos I quietly left the owl to continue its vigil.

Continuing on M-48 east (west of Pea Line) I flushed a small flock of Wild Turkeys from the roadside to my left. They took to the air and flew across the road in front of me toward the woods. Don't often get to see turkeys in flight! 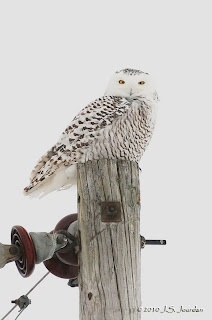 Heading north on Hantz Rd (off M-48) I scanned both side of the road but could not find any birds except a few crows in the distance. It wasn't till I crossed 21-Mile Rd. that I found the first Snowy Owl of the day: a female or juvenile bird on a light pole to my right. I took a dozen or so photos w/ the D300 from the safety of the car. But as I opened the back to get the scope the bird flew off to the east across the field. I managed a few flight shots before it landed in the field about 150-200 ft away. The bird was perched enough in the open to get some long-distance digiscoped images. Normally I wouldn't try given the distance and the overcast skies, but got some of my favorite images of the day from this setting. Time ~ 10 am. 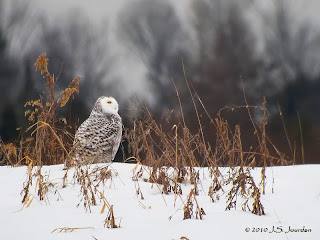 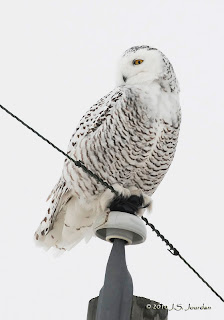 Continuing on Hantz Rd. just south of 19-Mile I spotted a second Snowy Owl on a pole to my left. I was able to pull relatively close to the bird and get some photos from the car. This time the bird remained while I grabbed the scope, but flew off as a large truck barreled past me. Grrr! The bird flew northwest and landed atop the old barn w/ the bright blue shingles. I took a couple of photos from the car, but decided not to go after it.

Crossing I-75 from 19-Mile Rd. I headed south on Centerline Rd. and quickly came upon a group of birders from Harbor Springs. They were enjoying a Snow Owl perched on a fence post near the road. I spoke briefly with Timmo Skallerup, who was in the rear car, and gave him news of the Hantz Rd. Snowies and Hawk Owl sightings. The Snowy Owl that they had been watching took off, and I spotted a second bird farther south flying across the field. 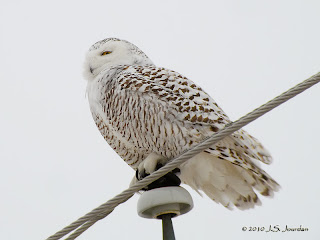 I followed the group for a bit and came upon a beautiful female Snowy Owl on a pole to my right. She paid us little attention and allowed numerous photos and a digiscoped video to be recorded. What a beautiful bird! ~10:30 am. 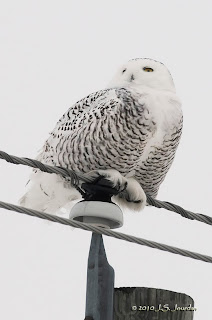 A third Snowy Owl was perched atop a pole just north of M-48 where Centerline Rd. turns into Bay Rd. I stopped for several images before heading west on M-48 toward Prairie Rd. and Chum Creek Rd. 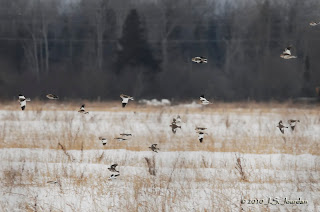 Along Prairie Rd. I came upon a huge flock of 200+ Snow Buntings feeding in the field to my left. Like a mass of swirling leaves and snowflakes the birds flushed from one location to the next, and drove me mad trying to get a decent flight shot. Too many birds moving at the same time, and the camera could not catch focus. Try as I might I managed a couple of fair keepers, and at least recorded a nice memory in my head. It was getting toward noon and I wanted to get over to the Dunbar Forest, so I turned around and headed back toward Centerline Rd. 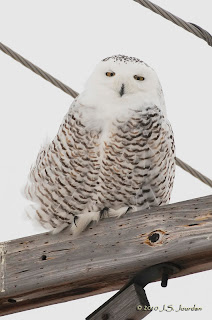 I returned back up Centerline Rd. north toward 19-Mile Rd. to jump on I-75 N. I encountered the three Snowy Owls again, and with the two birds on Hantz Rd. gave me 5 for the day. A sixth bird, a nearly all-white male, has been spotted in the area, but I did not see it today. 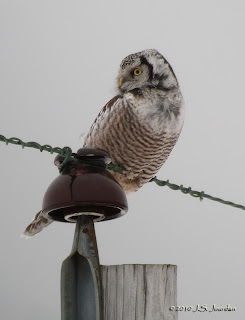 I headed up to 15-Mile Rd. and Riverside Dr. where a 3rd Northern Hawk Owl awaited me. As I arrived near the intersection I spotted the Harbor Springs caravan watching the owl perched on a pole next to the road on Riverside Dr. They were getting some gorgeous looks, and as I pulled up behind Timmo's car they were getting ready to move on. I used Timmo's car as a blind for a few moments to digiscope the owl, but it flew off just as they were leaving. The bird headed back across the field and landed atop a TV antennae on the corner house next to 15-Mile Rd. Instead of following them, I turned around to go after the owl. 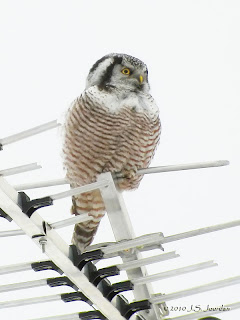 I drove back around the corner and parked along 15-Mile Rd. and scoped the owl for about 15 minutes. The wind was blowing hard, and my fingers were freezing, but I stayed out long enough to empty my Coolpix. I got into the car to change memory cards, and watched the owl disappear from the antenna. I decided to then head back up Riverside toward 12-Mile Rd. and Dunbar Forest. 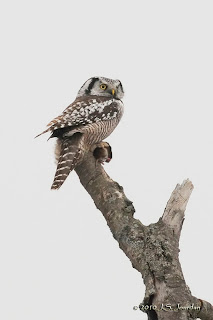 As I drove slowly along Riverside, looking the Hawk Owl, it suddenly flew out from the ditch to my left and passed literally over the hood of the car. Yikes! I could've hit it. How do you report hitting a Hawk Owl w/ your car? I would've been banished from the birding world for life (or even longer). Lucky for me it flew up and landed in the woods to my right. I put my binoculars to the bird and saw that it had just caught a vole. Great! I grabbed several photos from inside the car and left the bird to eat its meal.

* - Editor's note: Sadly, on 30 Jan 2010 the Hawk Owl at Riverside between 12-13 Mile was reported hanging dead from the power line on Riverside. It was suspected by DNR that the bird may have been electrocuted. I am saddened. 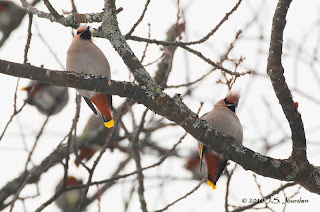 At the foot of 12-Mile Rd. (east of Riverside) a Bald Eagle was soaring over the frozen river. I doubled back to Scenic Drive and drove past the house w/ all the feeders. Since it was past noon the morning feeders were empty, and only a few Black-capped Chickadees were around. I continued around the corner and over the bridge where a flock of 20+ Bohemian Waxwings were feeding in a berry bush. They flew to the tree directly over my car and roosted for a few minutes before heading out in small clusters to the east. I was able to get some images from directly below, but severe backlighting produced some dark images. A small group of five Purple Finches remained in the berry bush and continued to feed. I failed to find any Pine Grosbeaks on 12- and 13-Mile Roads. 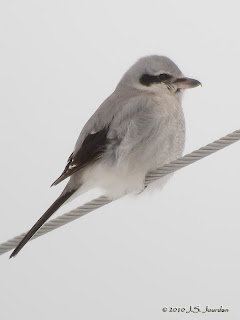 Driving south on Riverside I spotted a pair of vehicles pulled off to the side. Thinking they were birders I slowed to a crawl to see what they were looking at. Turns out that the cars were empty (they might be hunting?). However, a Northern Shrike appeared suddenly from behind a nearby house and landed 60 feet away on a power line. It stayed for several minutes and allowed me to get some nice digiscoped images. ~1:15 pm on Riverside between 15- and 16-Mile Rds.

I followed Riverside south to M-48 and took it across toward I-75 S and the bridge. Along the way I spotted the only hawk of the day: a Red-tailed Hawk. Going north on Hantz Rd. I re-found the two Snowy Owls alongside the road, but they flushed in separate directions as a truck approached from the north. One bird flew back to the barn w/ the blue roof and perched on the peak. I didn't bother to stop, but continued on toward the bridge. I had promised to be home by 7 pm so I jumped on I-75 just as the sun made its first appearance of the day... 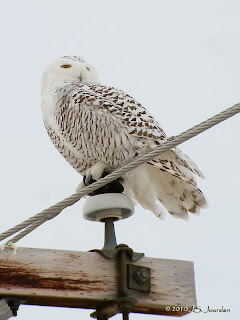 James Fox said…
Wow! Awesome pics. I saw the Hawk Owl in Harbor Springs but didn't get pics that were anywhere close to as good.
January 28, 2010 at 7:26 PM

Cathy Carroll said…
As always, Jerry, great post and photos. I was going to write that I think I'm your biggest [blog] fan. But then I thought; no, wait, I can't write that because it could never possibly be true. So many people are going to love these photos and video. Thanks for the pics and update.
January 29, 2010 at 12:39 PM