After posting this blog I received a detailed response from Kevin Karlson describing both birds as Short-billed Dowitchers. I've since reposted the blog with his comments here. 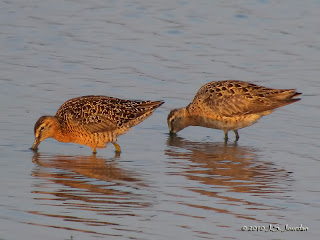 This morning I took a quick ride out to Cell 3 of the Banana Unit at Pt. Mouillee SGA in Monroe Co., MI. Strong storms moving across the area that last few days got me wondering if any odd birds might show up, so I made the trip before heading into work. The exposed mudflats held several Dunlin, a half-dozen Semipalmated Sandpipers, and these two Limnodromus dowitchers. At first glance the one on the left appears to be a Long-billed Dowitcher (L. scolopaceus). It showed a brick-red coloration with heavy barring on the flanks, a slightly 'heavier' appearance, and lack of wing projection. The one on the right a Short-billed Dowitcher (L. griseus), possibly the interior race L. g. hendersoni, although I could not rule out a possible L. g. griseus. Note the lighter, cinnamon coloration that extends into the belly region, lighter spotting on the flanks, slightly slimmer appearance, and wings that project beyond the tail. Unfortunately the birds made no sound, so identification had to be made entirely by sight.

The issue here is that Long-billed Dowitchers 'shouldn't' be here this time of year. Am I looking at a breeding hendersoni SBDO? The two birds feeding in proximity to each other provided a wonderful opportunity to address LBDO and SBDO field identification challenges, especially here in SE Michigan, where LBDO are seldom seen in the May-July months. So I set out to photodocument both birds with the hopes of generating a detailed view into their differences (and to hopefully ID them both).

I digiscoped these birds between 7 - 8 am on a clear morning from about 60-70' using the Zeiss 85T*Fl Spotting Scope, 20-60X Vario Zoom eyepiece, Nikon Coolpix P6000 and homemade digiscoping adaptor. The eyepiece was set to 20X and the Coolpix was zoomed to ~1.5-2X to remove vignetting. Images were cropped, and only slightly adjusted (noise reduction applied to background with birds untouched). The following images are presented in order based on time taken, and are discussed with respect to published references I found concerning Limnodromus identification. 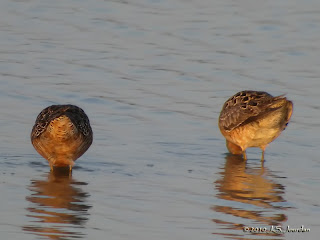 With their backsides exposed you can see the reddish coloration and barring on the underside of the LBDO (left). The SBDO (right) shows only light spotting on the flanks and white tail undersides. 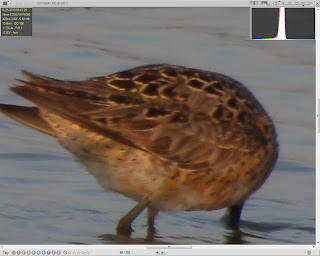 Note the black covert feathers with white fringes on the back of the SBDO, which appears to be in worn alternate plumage. Lee and Birch (1) describe the V-shaped pattern of the covert feathers to be consistent with Short-billed Dowitchers (see Fig. 7 of their article). Spotting is also visible along the flanks and undertail. Cinnamon coloration is also detectable, which supports L. g. hendersoni and appears to eliminate L. g. griseus. 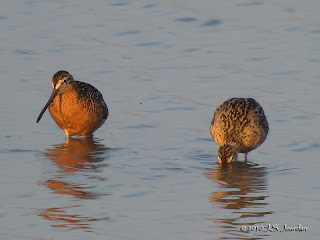 Spotting is visible on the neck and throat of the Long-billed Dowitcher (left). Jean Iron (2) describes this as a good field mark for separating LBDO from hendersoni, where spotting is weak-to-absent. 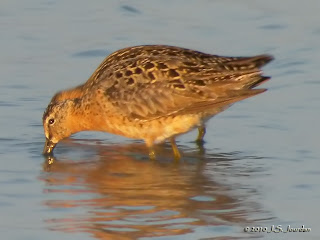 With the SBDO directly in front of the LBDO we see evidence of the 'longer' legs of the LBDO. The SBDO has its leg joint below the surface, while the leg joint on the LBDO is visible above water. Note, however, that this is an unreliable field mark. Numerous images I took of the two birds together showed the LBDO to be in deeper water despite the two birds next to each other. The next image is an example where using this characteristic can cause confusion. 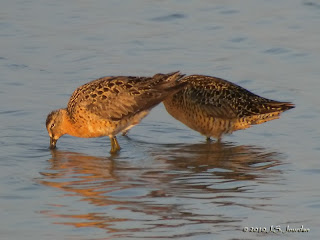 Apparently the two birds are next to each other, but the SBDO (left) shows a longer-legged appearance next to the LBDO (right). 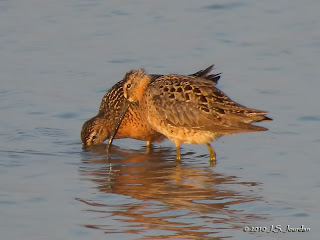 This image shows the color difference between the two birds. The LBDO (rear) has a richer-red coloration that is lacking in the SBDO (front). Although the brick-red coloration of LBDO's is evident in early spring during migration through this region, there are instances where SBDO's can take on this coloration, as well. Also, juvenile birds can appear 'browner' and darker than worn alternate adults. 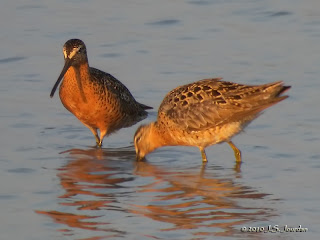 Note the slight downturn of the bill in the SBDO in the previous image. References suggest that LBDO can have a straighter looking bill, but the bird at left shows some evidence of a down-turn at the tip. Because their bills are prehensile, they can give the appearance of a downturn, even an upturn in bill. Sarvela (3) found that bill length (A) to head width (B) can give A/B ratios of 1.4 - 1.8 (mean = 1.6) in SBDO while A/B ratios in LBDO ranged from 1.7 - 2.2 (mean = 1.9) in LBDO as long as head angle was less than 15º.

Sarvela also described 'height of bill base' (i.e., the thickness of the bill above and below the nostril). If you're close enough to observe these birds then birds with a high bill base (1.5-1.7) are definitely SBDO. LBDO have small bill base (1.1). I performed these measurements on two of the images that showed the bird's bills, and the SBDO does show a distinct 'high bill base'. The LBDO appears to show a bill base measurement consistent w/ Sarvela's description. 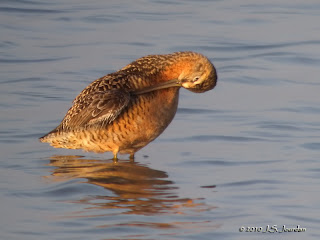 The LBDO preening shows the barring along the sides and flanks, rich-reddish neck w/ spotting. Underwing feathers (not shown) showed heavy barring - I'm uncertain whether this is the same for SBDO. 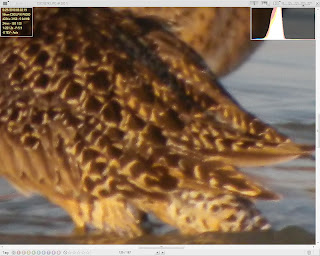 The upperwing coverts of the LBDO showed 'squared-off' fringes, as opposed to the V-shaped fringes seen in the SBDO. See Figure 7 of Lee and Birch's article (1). Normally obscured, the tail feather of this bird shows black barring that is thicker than white bars, also an indicator for LBDO (see slide 26 of Birch's powerpoint presentation) (4). 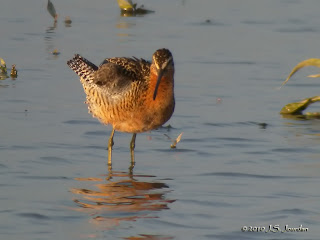 Tail feathers are visible in this image. This feature also shows variability, but generally, thick white bands relative to black bands on the tail feathers indicate SBDO, while black bands are thicker than white on LBDO. More detailed discussions can be found here (5) (6).

So, with the images I"ve provided, and the apparent supporting evidence provided by literature, my suspect bird appears to be a Long-billed Dowitcher. So, why am I not convinced? When I check the other shorebird guides (7)(8)(9) and (10) I see photos that suggest I could be looking at a breeding L. g. hendersoni. Then begs the question, is the second SBDO a hendersoni?

The above discussion is most useful when comparing birds in worn alternate plumage. There are additional features of pre-alternate and alternate/breeding plumage than can be useful, but are left for later discussion. The references all discuss these indicators, as well as those for juvenal and basic plumages. But hopefully, I haven't butchered the efforts of those who did all the field work. Bottom line - identifying dowitchers can be very frustrating, especially for those of us who see these bird only during a narrow window of migration.

2. Jean Iron's pics of LB Dowitcher in April and May