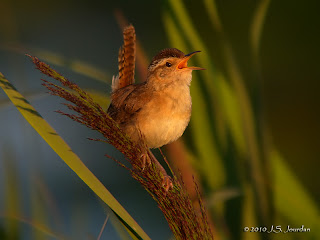 Forecasts called for storms this evening and oppressive heat this weekend. So I decided to make a 'quick' run to Pt. Mouillee before work. I arrived at Mouillee Creek and had the bike on the trail at 6 am.

I headed up the Middle Causeway and took in the early morning serenade of Marsh Wrens, Swamp Sparrows, Eastern Kingbirds, and a first Willow Flycatcher of the summer. The sun was just rising, and already the humidity was beginning to climb. A dozen Black-crowned Night Herons (adults and juveniles) were also rising from the ditches on either side of the Walpatich Unit and Mouillee Creek.

As I headed past the pump house and its gorgeous mat of American Lotus the trail took a turn to the south where it hooked up with the Humphries (Lead) Unit. As I looked out over the unit a Great Horned Owl sat perched in the lone tree directly in front of me. I was hoping to digiscope it, but it flew the moment I reached back to set up the scope. I flew back to the west and disappeared into the woods. As I scanned the trees looking for it I found another GHOW with a juvenile perched next to it. Too bad I was a half-mile away - I rode to the pump house but couldn't relocate them through the phragmites.

I continued east toward the junction of Vermet and Long Pond Units with the hopes of relocating the Plegadis ibises, but dipped. American Coot, Common Moorhen, and Pied-billed Grebes were swimming in the Humphries Unit to my right, while Great Egrets and Great Blue Herons were actively feeding and flying over the Vermet Unit. A quick scan northward along the east side of the Long Pond Unit yielded only a few Killdeer and several more egrets.

Heading east to the Banana Unit I made a quick stop at Cell 3 but still found it submerged with little-to-no exposed mud for shorebirds. I didn't stick around.

I stopped near the Middle Causeway to scope the eagle nest and found a juvenile Bald Eagle perched inside. An adult was perched on the edge of the tree line. Below me the Vermet Unit was littered with dozens of Great Egrets and Great Blue Herons. I decided to take several images to see if I could stitch them together for a panorama. 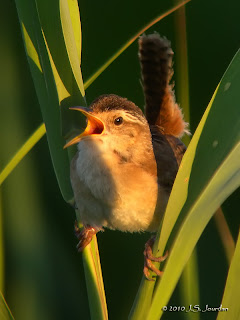 Continuing north along the dike I spotted a Marsh Wren singing in the phragmites just below me in the dike. It was perched in the open and gave me the opportunity to digiscope it from about 20' away. For the next 10 minutes this tiny little songster perched, preened and sang under perfect lighting conditions and provided some wonderful images. When it flew from one perch it moved to another just a few feet away and stayed in the open. Amazing! 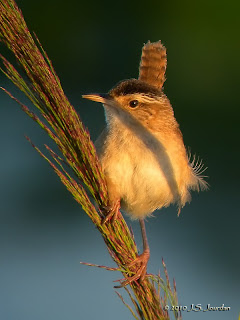 It was a magic moment and one I'll always remember! I was even able to get several minutes of video through the Coolpix. 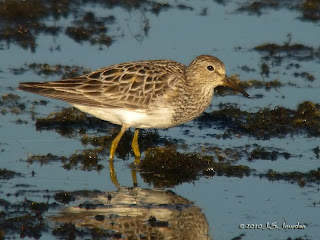 From there I headed along the North Causeway to the junction of Long Pond and Vermet Unit. The shallow waters along the east shoreline of the Long Pond was teeming with shorebirds, including the (presumed) same Whimbrel that Will Weber and I saw just last week. But before I focused my attention on it I decided to take advantage of some of the closer shorebirds: Pectoral Sandpipers (four birds), Semipalmated and Least Sandpipers (dozen each) and several Barn Swallows perched on phragmites and begging to be digiscoped. 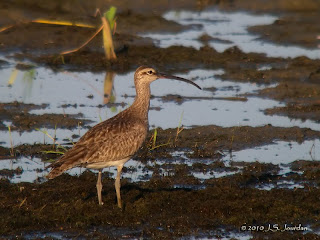 The Whimbrel was moving ahead of me along the shoreline, but finally stopped and posed for a couple of quick digiscoped images before continuing. Too bad for me the bird was among a half-dozen Killdeers acting as if they were at a Hannah Montana concert. The Whimbrel flushed and circled over the Vermet Unit before landing back in the Long Pond Unit back near the North Causeway. 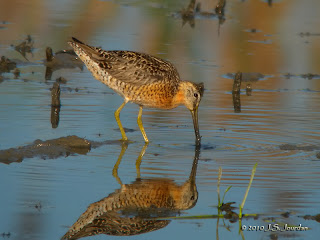 Four Short-billed Dowitchers were oblivious to the action and continued to feed just a few feet ahead. I took a few minutes to get some nice digiscoped images of them before continuing on my way. 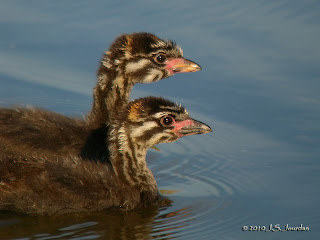 Before reaching the south end of the unit I spotted several young Pied-billed Grebes nearby. As they scampered about among the water bugs I was able to grab a couple of quick digiscoped images.

It was getting late and I needed to get to work, so I started heading back to the car. As I reached the pump house an Indigo Bunting was perched high up atop a willow tree and singing away. I decided to stop and digiscope it. As I slowly approached it I was ready to get some killer closeups, then a loud "POW!" exploded behind me. My tire exploded while it was on the kick stand and I turned just in time to watch the bird fly away and the bike crash to the ground. Rats. Now I had to walk the bike and all my photography stuff back to the car. 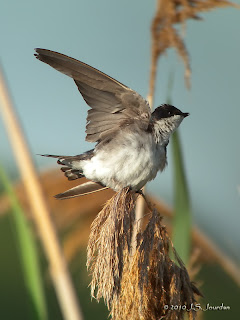 But I wasn't going to waste any chances to digiscope the Tree Swallows roosting in the phragmites to my left. But not too bad, I was back to work by 9 am. 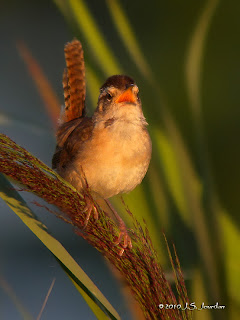 Alex Lamoreaux said…
Fantastic photos and great post! The Whimbrel is beautiful!
July 27, 2010 at 2:22 AM


Planning a BwBTC bird outing the end of August..not sure of the Date or the place. Suggestions are welcome.
Thinking CT or RI.
Let me know if you are interested.