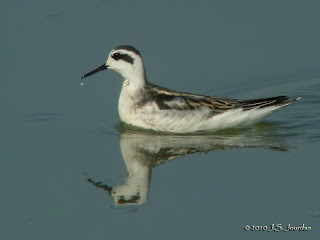 Birding is always more productive in a group setting. Today, I had the pleasure of birding w/ Jeff Schultz, Todd Palgut, Bob Arthurs, and Dan Gertiser. Shorebirding was great, and I was able to get some nice pics to end(?) my Pt. Mouillee season.

I parked at Siegler Rd. at ~8 am and biked the North Causeway, where I caught up w/ Jeff and Todd scoping the King Rail in the ditch just next to the large yellow tractor. They had just gotten great looks at the bird, which was found in the NE corner of the Long Pond Unit. I had ridden past the Willet and a Yellow-headed Blackbird on my way out, so I was 0 for 3 to start. But it was great seeing the guys, and after chatting for a few minutes we decided to hoof it out to Cell 3 for some shorebirding.

At the junction of the Vermet and Long Pond Units we caught up w/ Dan, who was just returning from Cell 3. He would catch up w/ us a bit later, but was going to look for the King Rail. We continued along the dike separating the two units and did our best to avoid running over the myriad of Leopard Frogs hopping across the trail. Jeff predicted he would see a Rat Snake, and sure enough, a hundred yards down the road we found a baby snake (expired) in the road. How does he do it? He has this uncanny way of predicting birds, too. We talked about Black-bellied Whistling Ducks, and Jeff predicted that one would be found here this year. Walt Pawlowski would report a juvenile BBWD just a day later near the Roberts Rd. entrance ot the Lead Unit!!!??? Jeff, how are you at lottery numbers?

We were soon joined by Bob and Dan, and the five of us headed to Cell 3. There we found dozens of shorebirds, but most were well out toward the edge of the mudflat. Still, we had good looks at Baird's Sandpipers, Stilt Sandpipers, Least and Semipalmated Sandpipers, Short-billed Dowitchers and Greater and Lesser Yellowlegs. 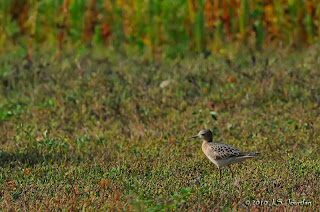 Jeff and I hiked toward the NE corner of Cell 3 to look for Buff-breasted Sandpiper in the grass near the large dirt pile. We dipped, but as we turned to scope the shorebirds Todd rode up and pointed one out directly behind us at 20' away. I grabbed a few pics from ground level, but was shooting into the sun. 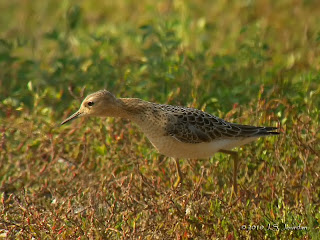 I walked around to the north so the sun would be behind me, and got a few pics before it disappeared. Digiscoping was again tough, as the bird kept moving and I had too much magnification with the 40x eyeppiece, but I did manage one keeper. I then joined the others who were scoping Wilson's and Red-necked Phalaropes off in the distance. I spotted a single Red Knot preening along the shore of the mudflat, and we watched as it flew back toward the NE corner. 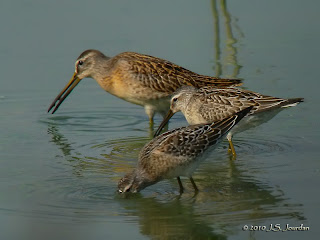 We then walked over to the east dike, where we had great views of the Red-necked Phalaropes and Wilson's Phalaropes in front of us. Stilt Sandpipers were foraging along the shoreline below us, so I spent some time trying to digiscope them. 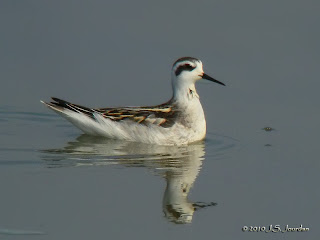 One Red-necked Phalarope was swimming near enough to shore that I walked down the dike to get better digiscoped images of it. It was a challenge to track the constantly-moving bird as it swam back and forth gleaing insects off the water's surface. 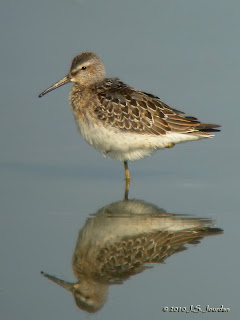 A preening Stilt Sandpiper was a more cooperative subject, and provided some nice portraits before it moved on and continued feeding. At one point I caught it scratching, but it looked more like it had a migrane headache. 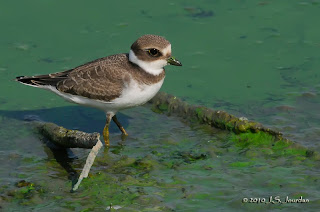 A Semipalmated Plover was just under me along the shoreline and feeding in the massive green algae bloom. Lighting was perfect for some nice images with the D300 and Sigma 400mm. A Greater Yellowlegs was also nearby and provided some nice images. 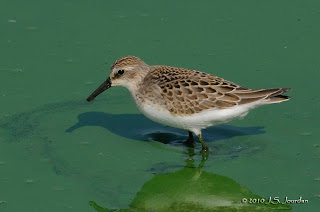 For a change, the lighting and location allowed for nice pics of a Semipalmated Sandpiper. 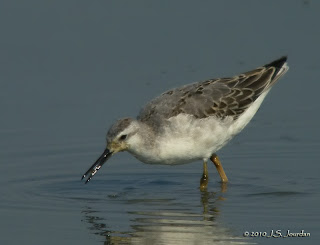 I digiscoped a pair of Wilson's Phalaropes that were foraging a bit farther out, then paused when Todd found a White-rumped Sandpiper out on the mudflats. It was too far to digiscope, but gave nice views at 40X w/ the scope. 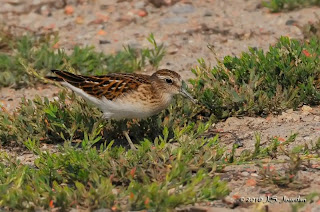 It was time for me to leave, so I left the group and headed back toward the North Causeway and Siegler Rd. On the way back to my bike I found a pair of Least Sandpipers feeding in the grass, and got some nice closeups before they moved on. 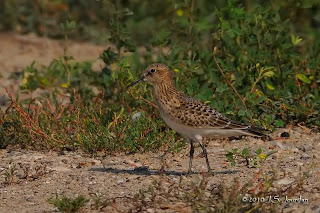 Ahead of me on the path a Baird's Sandpiper was working its way toward me, so I crouched down and got some nice pics of it from ground level. Pretty bird, and cooperative, too!

A group of other birders were scoping Sanderlings and a distant American Golden Plover, and I stopped to help confirm ID. I then grabbed the bike and rode the Banana Unit northward to the causeway and then west toward the parking lot. I stopped long enough to check for the King Rail, but it was a no-show, so I continued back to the car, where I ran into Kevin Welsh, Eric Enbody and Craig Bateman, who would later report a Western Sandpiper in Cell 3.

Hopefully I'll one more chance to bird Pt. Mouillee before Sept. 15, when it closes to hunting for the year.