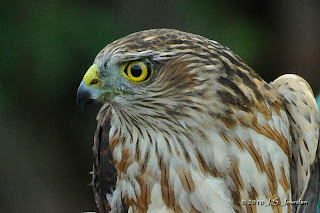 Robin and I got home a day early from vacation, which provided an opportunity for us to participate in Hawk Fest 2010 at Lake Erie Metropark, Gibraltar, MI.  The program is hosted by the Huron Clinton Metropark Authority and has, among its sponsors, the USFWS and Detroit River International Wildlife Refuge.  Hawk Fest 2010 was celebrating its 21st year, providing display tents, hawk ecology lectures/ demonstrations, and a variety of activities for children of all ages.  The festival also coincides with the peak of the Broad-winged Hawk migration, which can provide up to 40,000 / day average number of birds observed in this very narrow time window.  A graph showing the seasonal distributions of hawks observed at LEMP / Pt. Mouillee is available at DRHawkwatch.org. 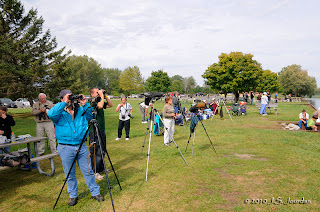 Saturday would prove to be a slow day for BWHA (4), due mostly to heavy clouds, SW winds and intermittent rain, but a huge push on Sunday yielded 40,000+ birds late in the afternoon.  A nice number of Sharp-shinned Hawks (318) passed through Saturday morning just before we arrived, so I managed to miss both events.  Oh, well.  A summary of the days counts can be found at HawkCount!

We arrived at the LEMP boat ramp Saturday morning a bit after 9 am and found a huge crowd already enjoying the day's flight.  A brief rain shower sent most running to their cars, but it let up and folks trickled back.  Josh Haas and Don Sherwood were acting as official counters while Rob Payne was busy fixing a flat tire.  It was nice catching up w/ Josh and few others, who I hadn't seen in a while. 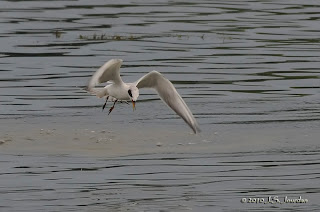 Things were a bit slow, so it was an opportuntiy to photograph some of the several Forsters Terns that were flying about.  Flight photography was a bit frustrating, especially when the birds refused to come closer than a hundred feet or so. 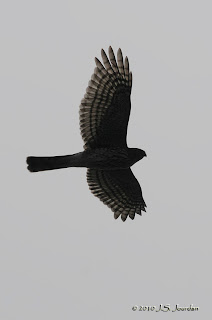 A few Sharp-shinned Hawks and American Kestrels passed by (mostly to the north over the rest rooms), but this one cruised overhead for some nice silhouettes against the overcast skies.  If you check out HMANA's hawk guide, you can see that SSHA have a distinctive flight profile that helps when birds are dark against the sky.  This is what a Sharpie looks like passing overhead. 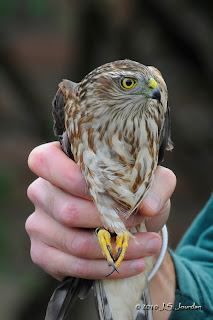 Better views of Sharp-shinned Hawks were had back at the Marshland Museum, where Gerry Wykes and folks from the Michigan Hawking Club were displaying 3 recently-captured sharpies to a group of  happy onlookers. 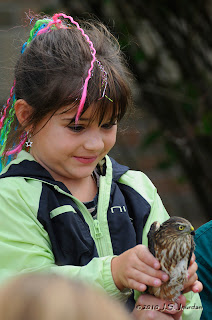 Several lucky youngsters were allowed to release the birds after they were banded.  I managed to capture this moment from the back of the crowd.  A tiny bit of aprehension was felt before releasing this bird to freedom. 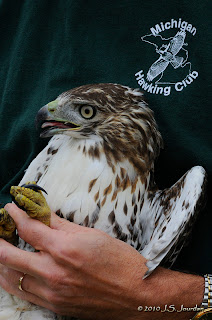 A juvenile Red-tailed Hawk had also been netted / banded, and was about to be released.  Gerry pointed out the distinctive patagial bars that help ID Red-tails in flight, especially when juvenile birds lack the classic 'red' tail.

Once the birds were released Robin and I headed to our next appointment.
Saturday's results 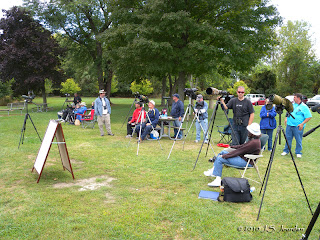 Clearing skies brought hope of a large flight of Broad-wings, so I ran down to the boat launch a bit after 9 am.  Turnout was as good as it was on Saturday, with chairs and scopes in the ready. Sadly, the morning would continue to be slow, much like yesterday. 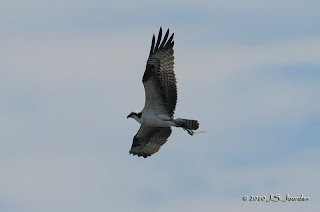 An Osprey was entertaining viewers with close passes along the canal, and I managed to see it fly by just as I arrived.  Another bird would later make a much higher pass over the site. 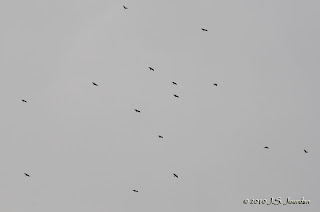 Late morning did bring a decent-sized kettle of Broad-winged Hawks, but they were high in the sky.  A few birds dropped low enough to photograph while they streamed overhead.  It wouldn't be significant until late in the afternoon, when Rob and the crew witnessed the big the migration, a whopping 40,000 Broad-wings kettling and streaming overhead.  Right on cue, and I missed it (again).  Grrr...  So the flight proved to be a climax to a brilliant weekend.  Congratulations to LEMP and USFWS, and thanks to all volunteers who provided time and resources to make this Hawk Fest 2010 another success!