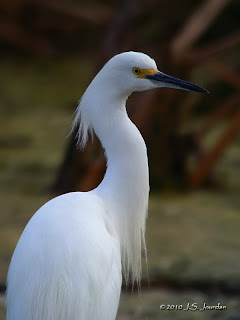 Robin and I were to fly back to Detroit this afternoon, so it was my last opportunity to do a bit of birding this morning.  So I grabbed the scope and headed across the street to the drainage pond to see what was about. The sun was still rising, so the majority of the pond was still in the shade.  Still, there was good activity with a number of waterbirds about. 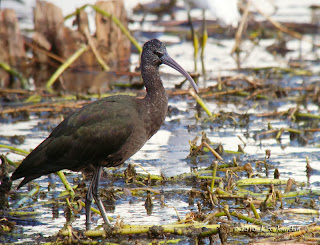 An immature Glossy Ibis was foraging along the near shore, so I followed it into the corner to see if I could some digiscoped images of it.  As I followed it, I realized that I would be digiscoping into the sun when it appears, so I hiked around a row of trailers and approached it from the opposite side. 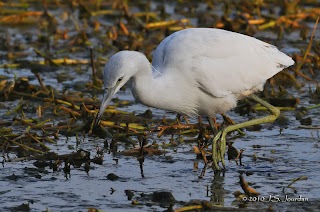 By now, the ibis was moving back in the opposite direction, so I turned my attention to a pair of white birds:  a Snowy Egret feeding just a few feet away, and an immature Little Blue Heron that was a bit farther out, but moving toward me.  Both birds were offering nice opportunities for digiscoping, and having them in the shade actually helped with exposures. 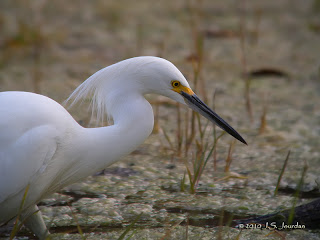 The birds foraged in two very different manners.  The Snowy Egret would probe the shallows with one foot hoping to stir up something to eat, while the Little Blue Heron slowly stalked the emergent grasses looking for something to come to it.

Once satisfied that I had gotten some keeper images, I scanned the vegetation lining the shoreline for passerines.  A Palm Warbler was chattering along the shoreline and making short passes onto the pond to look for insects.  Northern Cardinals were singing somewhere behind the thick shrubs lining the shore, while Blue Jays were making 'perfect' calls of the Red-shouldered Hawks that were roosting nearby. 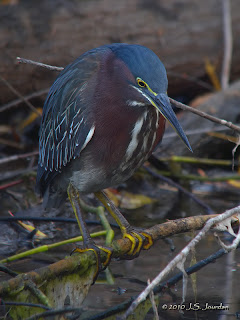 Just as I was about to leave the corner I noticed a tiny movement in the shadows: a Green Heron.  Motionless, the heron stared intently at the water below, waiting for its next meal.
With shutter speeds of 1/7 sec. I needed a steady bird, and the self-timer of the Coolpix P6000 to capture images.  The statuesque Green Heron didn't disappoint!  Lovely bird. 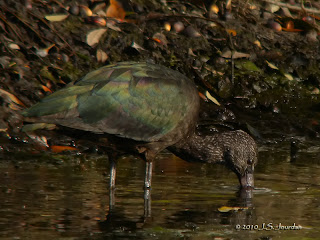 I then headed back toward the sunny side of the pond, where the Snowy Egret and Glossy Ibis were now feeding together.  I followed them for a while trying to get some digiscoped images, but it was next to impossible exposing for an all-white bird next to an all-dark bird w/o overexposing one and underexposing the other.  A brief visit by a pair of Common Moorhen and American Coot provided a bit of a distraction, but didn't stay long enough to warrant any photos.

Time to head to the aiport and home in time for New Year's Eve! Farewell 2010!  You were a good birding companion.