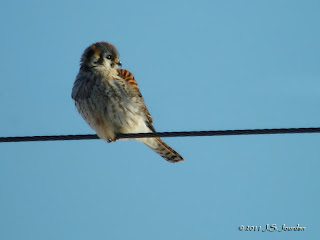 Pretty good weekend of birding in the s. Wayne Co. / N. Monroe Co. area.  This American Kestrel was digiscoped this afternoon on Rheaume Rd. just east of the entrance to the Rockwood Quarry.  I was about 150' away.

On Sunday morning I decided to make a quick jaunt south before the big storm was to arrive and dump 0.5 - 2" of snow and sleet*.  Campau Rd. was quiet, yielding only a few Northern Cardinals and Black-capped Chickadees. 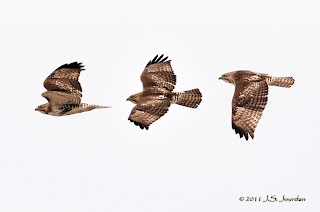 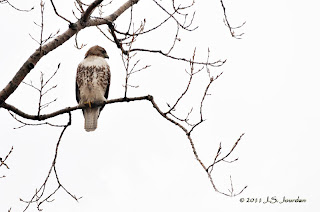 Just up the road a third juvenile bird was perched high in a tree and provided a few long-distance images with the D300s.

This afternoon I left work and headed back to the area, taking advantage of the clear skies.  As I drove through McDonald's to pick up a Diet Coke a Peregrine Falcon flew over the building and continued west across Biddle Ave.

As I reached Roberts Rd. a Red-shouldered Hawk flew across the road.  After digiscoping the American Kestrel, I flushed one of the immature Red-tailed Hawks as I drove along Rheaume Rd. but couldn't get a photo. 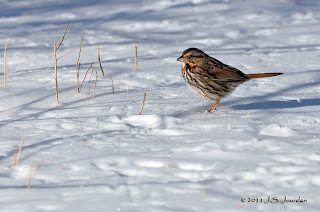 At the corner of Roberts Rd. I threw out some seed and was immediately greeted by (3) Song Sparrows, a Northern Cardinal, a pair of White-throated Sparrows, a pair of B-C Chickadees, four American Tree Sparrows, and a Dark-eyed Junco.  The late afternoon sunlight provided some nice color for this Song Sparrow.

As I drove out Roberts Rd. I spotted an immature Rough-legged Hawk far out in the field to my right.  Too far to digiscope, I hunched by the side of the road and enjoyed 5 minutes of nice views through the spotting scope.

* - Our local, crack team of Doppler weather forecasters were a bit off; we ended up getting 8-12" of snow...