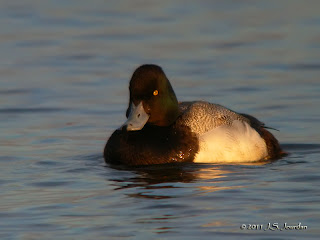 I dropped Robin off in Trenton this evening (6:30pm) and had an hour to kill, so I shot down to Pt. Mouillee HQ and Riverside Park for a quick, early-evening birding session.  Skies were clear and it was cold, but there was still light for some photography.

Riverside Park was active with 12-18 Common Mergansers (mostly females/juveniles) roosting out on the stumps and dead snags sticking out of the water.  Long-distance digiscoping was less than successful, but not bad.  Near the North Causeway a couple dozen Tree Swallows were actively feeding in open water, but none of the birds drifted close enough for decent photos. 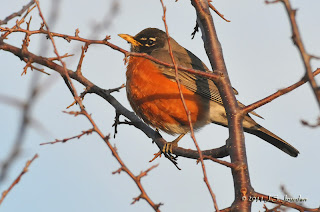 A ride down Campau Rd. yielded a nice American Robin perched in a tree next to the road.  Dozens more were scattered in the open-but-muddy fields on the east side of the road.  Though I picked through the birds I was unable to find any Woodcock or Wilson's Snipe. 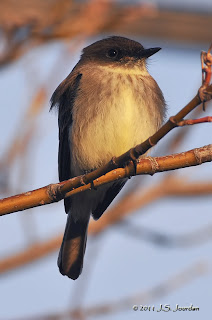 As I was doing so, an Eastern Phoebe flew out of the woods and landed in the tree next to the car.  It must've been curious, 'cause it stayed for several minutes while I took several photos from inside the car.  I was able to play with different ISO's (starting at 800 and ending at 200) as it posed just a few feet away. 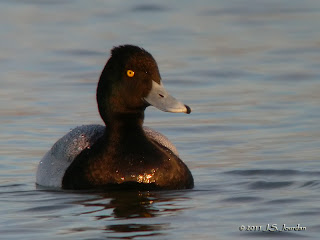 A quick loop through the Mouillee HQ parking lot yielded a half-dozen Bufflehead.  While at the boat launch, I noticed a group of Lesser Scaup swimming/courting just a few yards out from the shoreline.  I parked the car, grabbed the scope, and crawled around the back side of the evergreens with the hopes of digiscoping some of the birds. 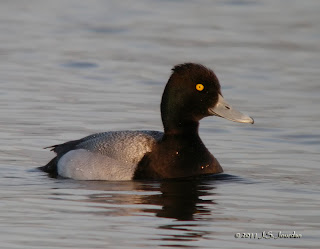 I was successful in getting some nice shots of the ducks from about 30' away despite the now-setting sun.  It wasn't until someone stopped and walked out onto the observation platform did they swim away. 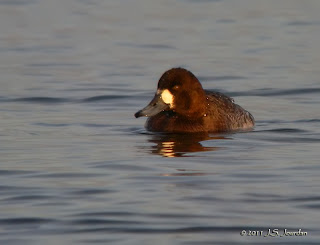 Nice one hour of birding!

GumbyandPokey said…
Hi! I've been following your blog for a while because we also bird (actually, it's my 14 yo son that birds) and we live in MI. I've even tried to leave some comments and then something happens at the end and they don't post!

Anyway, just wanted to let you know that I really appreciated these last two posts with the details you gave. Next week is Spring Break and we are heading out to hike and bird and go herping for the first time. We've never been down in the Monroe area and I like to get some details on the places we want to visit. Your posts really helped me do that.

Love your blog and photos!