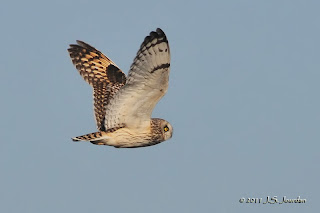 After a successful photography outing in the Bahamas I was feeling pretty good about my abilities with a camera.  Then, I took the inaugural first bike ride today at Pt. Mouillee SGA and remembered just how difficult it is to photograph migrating waterfowl in the spring.

Early spring waterfowl at Pt. Mouillee are jumpy, and getting w/in a 1/4-mile of them w/o them flushing is next to impossible.  I parked at Mouillee Creek and rode up the Middle Causeway toward the Lautenschager Unit, where I found dozens of Green-winged Teal, American Wigeon, Ring-necked Ducks, and the odd Mallard.  Amazingly, I was able to get w/in a hundred yards of them w/o them taking off, so I was excited to finally get some digiscoping in.  Unfortunately the P6000 froze and would not open. Grrr!  I had to settle for pics from the 400mm Sigma. 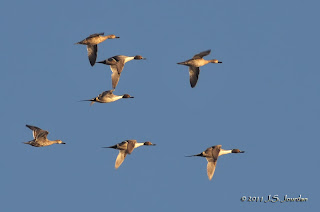 As I continued on I saw my first four Great Egrets of the spring heading west along Mouillee Creek.  Song Sparrows were everywhere!  American Coot and Lesser Scaup tended to keep to the Mouillee Creek and Humphries Unit.  A small flock of Northern Pintail flew overhead, and all I could manage was a distant pic. 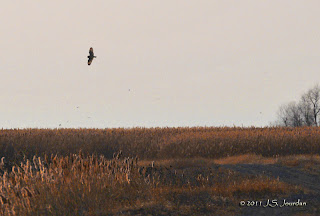 I stopped near the junction of Vermet / Long Pond/ Humphries Units to scope a small flock of Ring-necked Ducks and Bufflehead that were swimming to my right when a Short-eared Owl suddenly flushed from the phragmites ahead of me.  I was able to get a quick shot as it lifted off, but it headed directly into the sun, where all I could see was a silhouette.  It circled a few times over the sunflower field before heading out over the Humphries Unit.  The nearby Ring-billed Gulls then harassed it until it flew off toward the Banana Unit. 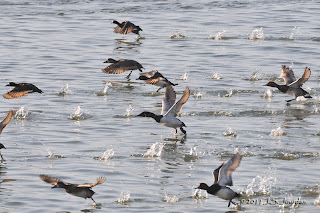 The Banana Unit was swarming with a thousand Ring-billed and Herring Gulls feeding on the carcasses of dead Carp that did not survive the winter.  I rode around to the Lake Erie side of Cell 2 so that I could get a better view of the birds.  Lake Erie was hosting large rafts of Canvasback, Redhead, and mostly Lesser Scaup. 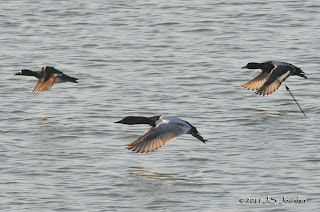 Note how the white speculum on the wing does not extend into the primaries like it would on a Greater Scaup.
I scoped the gull flocks and found only Ring-billed and Herring Gulls.  No white-winged gulls or other oddities were about. 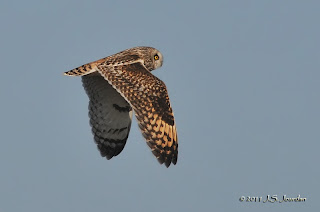 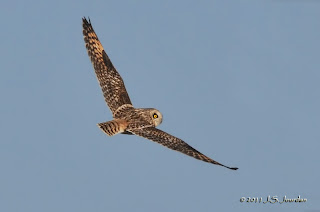 As I approached the north end of Cell 3 the Short-eared Owl flushed from the near bank and took off to my left.  I practically fell off the bike as I whirled to try and photograph it as it flew off. I have no ideal how I managed to capture any keeper images as it flew back across Cell 3 toward the Vermet and Humphries Units, but I was stunned that I had.  I had finally gotten some nice images of my favorite owl!  What a beauty. 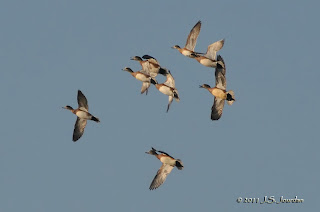 I continued on along toward the North Causeway, scanning the Vermet Unit on my left and Cell 5 on my right.  Tree Swallows had returned and were beginning to stake out nest cavities in the dead trees.  A small flock of American Wigeon flew by and landed within scoping distance, but not digiscoping distance. 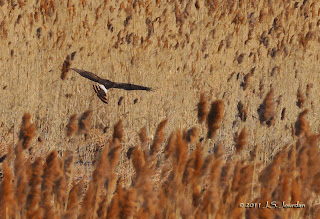 I was also too far to get decent images of a Northern Harrier cruising the east shore of the Vermet Unit, so I created this dry-brush image from a heavily-cropped photo. 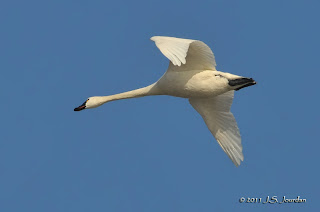 I took the dike trail separating Vermet and Long Pond Units back toward the Middle Causeway and managed to capture a large flock of 40+ Tundra Swans lifting off from the west side of the Vermet Unit and heading due north.  They were silent as they flew, but their wing beats were deafening! 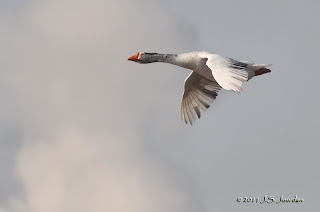 Just as they left, I spotted a single large goose heading toward me from the Long Pond Unit.  I thought I was seeing a Greater White-fronted Goose, but it turned out to be an apparent Graylag Goose.  It might be a Graylag x Greater Whitefronted Goose, but it was much larger than the nearby Canada Geese, and listening to it 'HONK' while it swam convinced me that I wasn't seeing a GWFG. 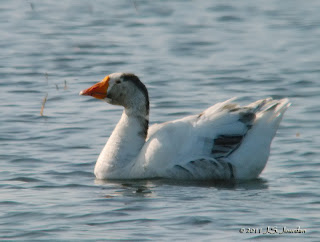 Still, it was a pretty bird and gave me the chance to digiscope something now that I had gotten my camera working again.  It does have me wonder whether its a migrating bird(?). 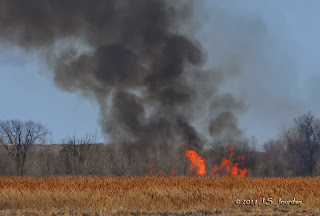 As I scoped the goose I became aware of a large smoke plume billowing from the marsh near the Roberts Rd. entrance.  It looked like a phragmites burn was taking place.  I managed to catch some of the flames shooting up.  Impressive. 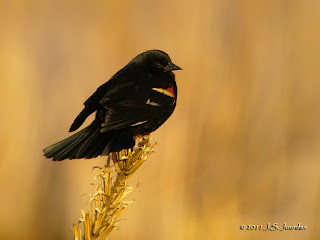 Ending the day with a nice digiscoped image of a Red-winged Blackbird made the day a success.

Of course, you know its spring when you return to the parking lot only to find the woods littered with garbage from inconsiderate slobs who think nothing of dumping their crap on the roadside.  I had a large yard bag in the back end and decided that it needed to be picked up.  So, I waded into the underbrush and started picking up the garbage.  Three ladies who were walking their dog stopped to help me, and within 10 minutes we had the place cleaned up.
Thank you, ladies!  A little act of kindness went a long way. 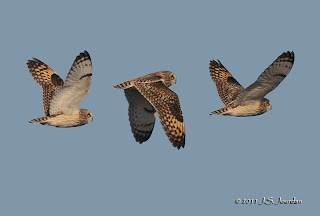 I'm convinced that Karma was rewarding me for my efforts, by giving me a couple of Short-eared Owl photos worth keeping.  Had I not stopped to clean the woods, those images would have turned out to disappointing tossers...