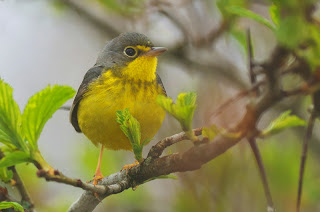 My first birding destination this week would be Elk Knob State Park, located just minutes from downtown Boone, NC. From the intersection of US 421 North and NC 194 North head proceed north approximately 4 miles to Meat Camp Road, turn left and drive 5.5 miles to the entrance on your right.

Elk Knob sits among the high peaks of the Amphibolite-Gneiss range of the Piedmonts and is a northern hardwood forest dominated by beech trees.

The open fields on either side of the entrance are supposed to be good for Golden-winged Warblers and Least Flycatchers. I found neither upon my arrival. My only consolations were a pair of Eastern Bluebirds, American Robins, Mourning Doves, and European Starlings. An American Redstart was singing in the woods left of the entrance, and I found it easily. A Chestnut-sided Warbler was nearby, but a bit harder to locate. Rufous-sided Towhees and Rose-breasted Grosbeaks could also be heard singing deeper in the woods.

I drove to the trailhead for the Summit Trail, a 1.8 mile series of switchbacks that would take me to the top of the mountain, which consists of a heath bald on top (low-growing scrub). Last year at this time I attempted the same trip, but failed to make it the final 200 yards up the side of the mountain to the top (the switchbacks end, and a 45º steep service trail must be climbed to reach the top). This year I was determined, despite carrying 20+ lbs. of scope, tripod and camera equipment. 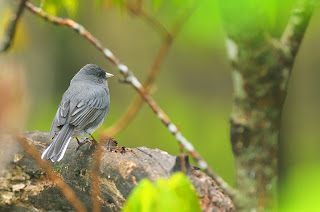 It was cloudy, cold, and a light fog blanketed the area, so lighting was poor. I began walking the first of 12 switchbacks that took me through a mature beach-oak forest. The forest floor was blanketed with White Trillium and False Solomon’s Seal. The woods were relatively quiet save for the lazy song of a Blue-headed Vireo and the occasional trill of Dark-eyed Juncos. 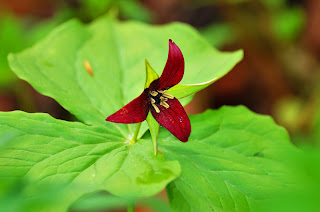 At about the 6th switchback, the White Trillium were replaced by Red Trillium. As I stopped to catch my breath I could hear a pair of Barred Owls conversing in the distance. A pair of juncos came close enough to photograph, and took the opportunity to use the heavy equipment I HAD to carry. Overhead Canada Warblers were singing, but keeping out of sight. The “veer” call of several Veery were being heard, but I was unable to bring them in close enough to see.

By the time I had reached the 12th switchback and the service trail, I thought that my day was going to be over. The steep hillside looked daunting, and I didn’t have the energy. But in the back of my head I kept hearing, “You can do it, Mr. Frodo!”, so I continued on (for the Shire). I had to stop every 50 feet or so, but eventually I made it to the summit.

I was greeted by singing Canada Warblers, Rufous-sided Towhees, a Gray Catbird, and American Robin. Though I pished for 20 minutes, I was unable to bring any of the birds out from the heath, which blanketed the entire mound. 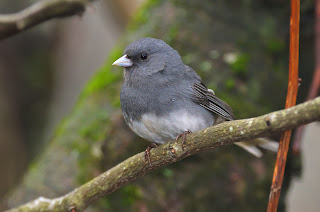 Starting back down the service trail I came upon a pair of Dark-eyed Juncos that ‘chipped’ loudly and came close when I returned their calls. I managed a few captures from just a few feet away. 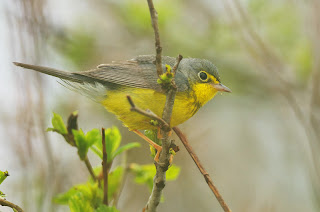 Oddly, a pair of Canada Warblers approached, as well, in response to my ‘chip’ notes. I managed a few pics of a female (?) that foraged just a few feet away. 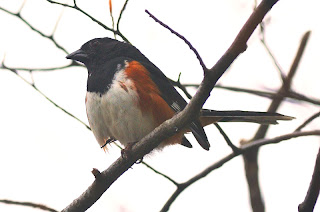 Rufous-sided Towhees were singing their ‘drink-your-TEA’ song, but the closest I could come to seeing one was an individual that flew out and nearly took my head off as it crossed the trail. I finally caught up to a pair along the service trail on my way down.

I took the service trail all the way down (1.1 miles) so that I wouldn’t have to take the switchbacks (which, incindentally, is more like 2.8 miles long). Despite the threat of shattering knee-caps, the steep climb down was quicker and less tiring than the longer walk up. I made it back to the car in less than an hour.

On my way out I stopped at the entrance for a few minutes to listen for birds. A Least Flycatcher finally made an appearance, and was found as I followed its ‘Chebeek’ call. I was unable to hear Golden-winged Warbler, so I decided to continue on down the road another ¼ mile to search the open hillside. 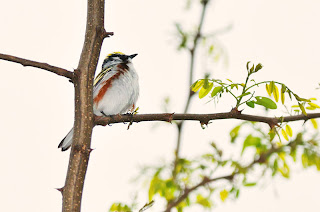 A pull-off on an undeveloped (new) lot brought me my prize. As I listened to Chestnut-sided Warblers (left), a Common Yellowthroat, Yellow Warbler, Rose-breasted Grosbeak, Rufous-sided Towhees, and another Gray Catbird, my subconscious heard ‘Bee-buzz-buzz-buzz’ off in the distance. I shut the car off, hopped out, and hiked to the edge of the lot where I found a beautiful male Golden-winged Warbler high up in a tree. Unfortunately it wouldn’t come down close enough for a photo attempt, so I had to be satisfied w/ binocular looks. A bright blue Indigo Bunting flew past and sang high up in another tree. I would find a second Golden-winged Warbler across the street, but again too far to photograph.

Continuing on I would find a Brown Thrasher, and hear a Hooded Warbler from somewhere in the heavy woods below. Satisfied, I headed back to the cabin before the rains started.