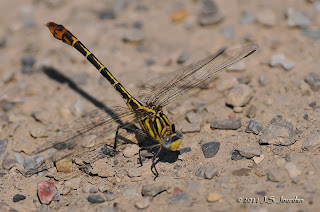 Sometimes you get an unexpected surprise when you're out on the regular jaunts.  This afternoon I was down at Pt. Mouillee looking for birds when I stumbled upon a visitor not seen in these parts before. 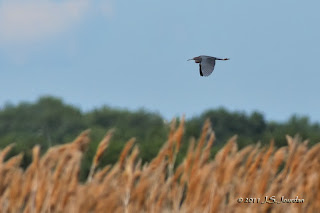 Attempts to relocate it failed.  So, as I was walking back to my bike, I decided to try and photograph one of many Green Darners floating above me and zipping about.  Having no luck, I turned my camera on a dragonfly that had just landed a few feet away.  I assumed it was something I had photographed before, so I fired away a few shots and continued on my business.

When I looked up the dragonfly later I tentatively thought it might be a Unicorn Clubtail.  I posted the photo of it to Facebook for verification.  Julie Craves was kind enough to respond w/ a polite 'No.'  She wrote that it was a Flag-tailed Spinylegs (Dromogomphus spoliatus), and "that the only place in MI for FTSP is at Oakwoods Metropark, although they should probably be in other appropriate locations (see http://www.rrbo.org/pdf/sp​inyleg.pdf)".  Darrin O'Brien followed that up w/ mention that it was a first county record for Monroe, MI, so I needed to record it at Odonata Central.  So I did!  Many thanks to Julie and Darrin for the ID!

As for the rest of my evening it was pretty quiet.  A fly-by Least Bittern was followed by a second bird that landed out in the Vermet Unit (from the Long Pond Unit).  Dredge pumping was continuing in Cell 3, so there were no shorebirds about.  I called it an early night, as it was hot and windy, and birds were not moving.