We set out today for an all-day tour of the SW portion of Ireland, or The Ring of Kerry.  As the website mentioned, we would travel in a counter-clockwise direction to minimize travel hazards, and left Killarney after making a quick run by St. Mary's Cathedral.  I was on the wrong side of the bus to get any pics, but couldn't do the majestic structure any justice if I tried - so I enjoyed a brief glimpse as we rode out of town. 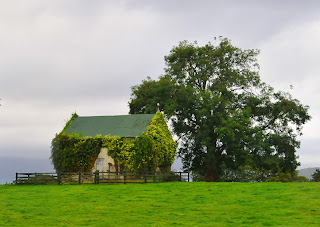 A short ride later brought us to the Gap of Dunloe and the entrance to the Ring of Kerry.  Moriarty's store was waiting for us with irish coffee and plenty of time for shopping.  Perhaps some of the best shopping was found here, so the entire tour group ravaged the shop and exhausted the sales persons.  After everyone's wallets were lighter we made a brief slow-down to see some ancient Ogham ('Ome') Stones, or alphabet stones (ca. 400 AD). 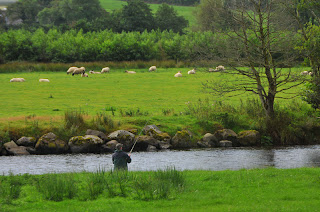 We would pass through Killorglin and see the famous statue of King Puck.  Miles of peat bog and bog cuttings would be seen as we scanned the hillsides and distant mountains.  Gleinbeigh and its Bog Villages offered a brief view of the ocean before we continued onto the Kells.

Dingle Bay offered a beautiful stop for some photos.  I took this vertorama of the bay, and its rocky shoreline.  Apparently the best views of the bay are from the ocean looking into shore. 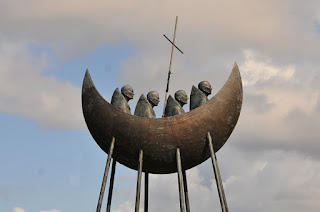 Cahersiveen is a small town near the extreme SW side of the country (near Valentia Island) where Daniel O'Connell was born (you might remember the large Angel Statue in Dublin that was erected in his name - the one w/ the bullet holes!).  We stopped just long enough to grab a quick photo of the still-standing remnants of his birthplace, followed by pics of the famous Boat of Monks statue. 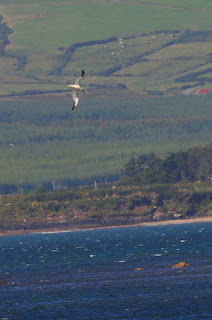 We stopped briefly in Waterville so folks could stretch their legs.  Since we were near water I scrambled down to shore to do some quick birding.  Oystercatchers (Haematopus ostralegus) and Gannets (Morus bassanus) were the birds of the day here.  I also saw a few Cormorants, and a flock of Black Guillemots (Cepphus grylle) barely in view through the binoculars - only when a few of them raised up and flapped black wings w/ white patches did I confirm ID.  Common Gulls were also present, but too far out to photograph.  As we left town we drove by a memorial statue to Charlie Chaplin in front of Fossett's Circus, which was in town. 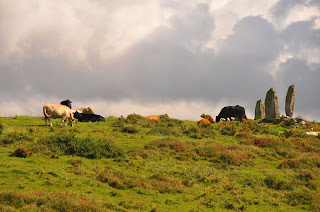 Twenty minutes later we stopped for lunch at the Scarriff Inn, located half-way between Waterville and Sneem.  The restaurant was cafeteria-style, but offered stunning views of the ocean.  I spent some time taking panoramas of the bay and surrounding hillsides.

Fuschia grows native here, so large bushes were everywhere.  Heather and Crocosmia were also abundant, and were my favorite plants of the trip. 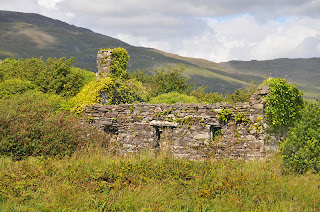 The Great Famine is a sad chapter in Ireland's history.  Evidence of the great potato famine are still visible today, and we made brief stops to see some of the ruins. 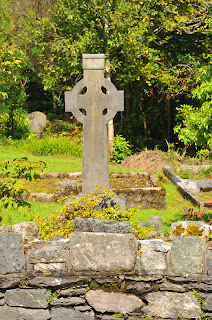 A short drive through Sneem was followed by a much longer drive along the southern portion of the Ring.  We finally arrived at the famous "Ladies View" for more photos.  An approaching rain storm over the mountains added dramatic affect to an already-gorgeous scene.  I took a few pictures... 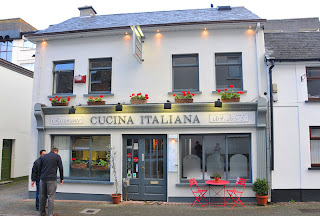 We managed to board the bus just as the rains hit, and drove the last 20 minutes or so out of Killarney National Park to complete our trip.  Arriving back at the hotel, we dried off, rested, and made plans for the evening.  Robin and I walked the town a bit, and found a wonderful restaurant in a back alley called "Cucina Italiana".  We had our best meal of the trip here!

With the sun setting on our evening we walked back to the hotel, stopping just briefly to get some pics of the large Celtic Cross and memorial garden next door. 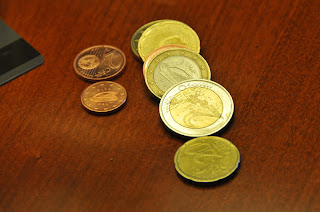 A full day, and I even had some money left over!

More pics from the day's trip can be seen here.