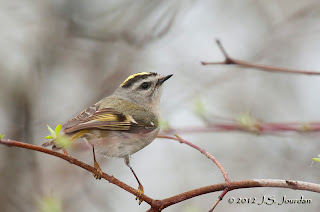 Forecasts called for cloudy skies and possible rain today, so I decided to drive to the boardwalk at Magee Marsh to do some early early early Biggest Week in Birding birding... What I didn't know was that NW OH would be blanketed in a fog so thick that visibility would be less than 50 yds.

Hoping that the fog would burn off before I got to Magee I pulled into Metzger Marsh Wildlife Area and took a slow drive down to the lakeshore.  The cornfields on either side of the road were flooded, but Red-winged Blackbirds and Common Grackles were actively foraging. I'd had hope to see some possible 'larkspurs' (Horned Larks and Lapland Longspurs) but only managed to hear a single Horned Lark calling in the distance.

The canals on either side of the road (past the boat launch) held at least four Great Egrets, two of which were sporting bright green lores, already!  A Belted Kingfisher flew in just as I drove by, but quickly departed before I could get the camera raised.  The marsh to my right was thick with large rafts of American Coot, plus a single drake Ring-necked Duck.  The parking lot at the end of the road made for a quick turnaround as there was zero visibility of the lake.

Just down the road from Metzger, and just past the Ottaway National Wildlife Refuge was the entrance to Magee Marsh Wildlife Area.  Strangely enough, just as I pulled into the drive past the Black Swamp Bird Observatory the skies suddenly cleared.  The marsh was active with Red-winged Blackbirds, Common Grackles, and American Robins singing.  I saw an Eastern Phoebe foraging along the creek to my left, but was unable to get a clear photo through the trees. 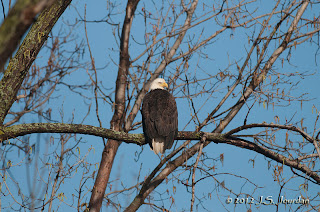 My attention was drawn to an adult Bald Eagle roosting close to the road.  The bird appeared soaked from the morning fog, and was busily preening and trying to dry out.  I took the opportunity to get a few quick photos w/ the Nikon D300s, 300/2.8 VRII, 1.4TCII, SB-800 flash and Better Beamer.  I then reached for the scope to get some digiscoped images from the roadside. 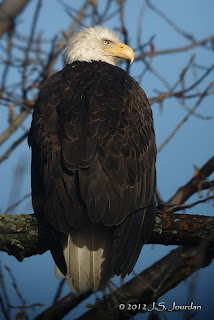 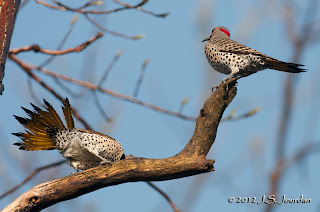 Overhead a pair of male Northern Flickers were actively calling and appearing to tussle over potential nesting sites.  At one point one bird attempted to display to the other bird, but its bedraggled tail feathers did little to impress the other male.  You could image who won this fight... 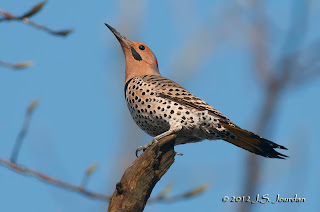 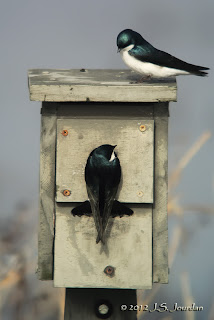 Just as I entered the Magee Causeway (past the Observation Tower) I heard the first Swamp Sparrows trilling out in the marsh.  Before reaching the Lake Erie shoreline, parking lots and Magee Marsh boardwalk, I took a few minutes to watch the Tree Swallows actively feeding and preparing for nesting. 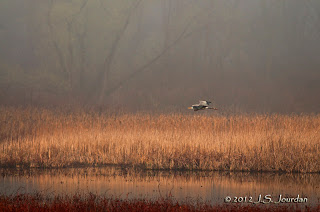 I then took a few photos of the marsh with the receding fog in the background.  This panorama was stitched from five images taken w/ the Nikon V1 at 10mm. 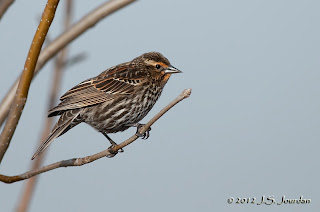 A female Red-winged Blackbird obliged w/ a quick photo from the car.

I drove the length of the parking lot and parked next to the boardwalk entrance (west end). Though still a month early for warbler migration, the place was hopping w/ Common Grackles, Red-winged Blackbirds and American Robins actively nesting.  Wood Ducks were visible in the trees, and a couple of Eastern Phoebes were already staking out near the West Tower. 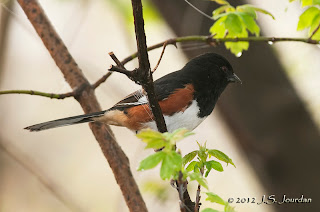 On wet days the boardwalk is extremely slippery, and today was no exception!  Footing was delicate, so folks walked slowly as they scanned the understory for Fox Sparrows, Winter Wrens, and Hermit Thrushes.  I managed to see a couple of Fox Sparrows, and caught this fly-by Rufous-sided Towhee before he continued on out of sight. 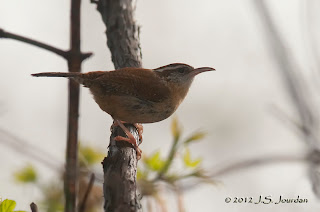 A pair of Carolina Wrens were singing and actively foraging between markers 7 - 8 so I spent some time trying to get pics against the overcast skies. 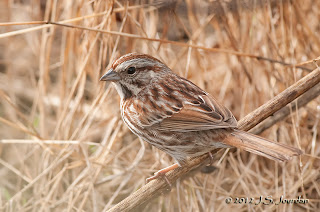 This Song Sparrow was made for its surroundings! 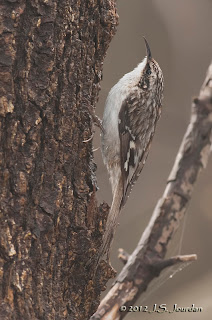 I ran into Will Weber, and we continued along the boardwalk as the fog began to inch back in off the lake.  We ran into flocks of Brown Creepers and Golden-crowned Kinglets, seeing a half-dozen of each working the trees along the boardwalk.  Near marker 20 we found a Rusty Blackbird, and heard a winnowing Wilson's Snipe somewhere in the distance.  We also had brief glimpses of Hermit Thrush and Winter Wren as they scooted along/under the boardwalk ahead of us. 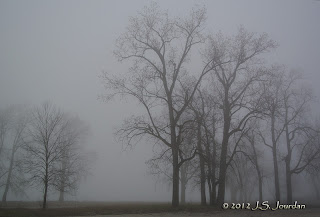 We returned to the parking lot just as another fog bank rolled in, and it didn't look like it was going to improve, so we parted ways and headed for home, but not before seeing a pair of Blue-winged Teal in the pond to our left.  Though the weather wasn't the most cooperative, the marsh and boardwalk were quite active for late March and beckons a return trip in the next week or so!