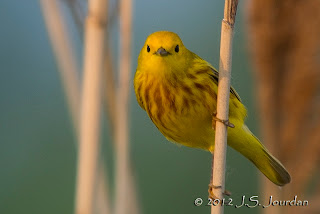 I headed down to Pt. Mouillee with the thought that last evening's thunderstorms might have put some new birds down.  Parking at Mouillee Creek I headed along the Middle Causeway toward the Walpatich Unit, where I found a singing Yellow Warbler alongside the road.  This time I had a battery in the Nikon V1 and was able to capture some decent digiscoped images in the low light.  A singing Willow Flycatcher then caught my sight, but moved off before I could get any images. 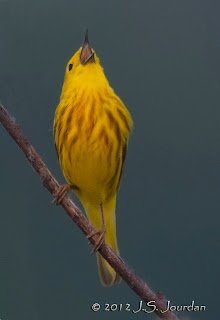 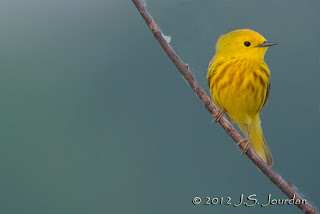 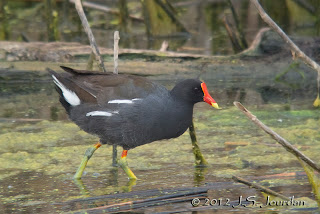 Though it was supposed to be cooler today, the air was still heavy and warm (78F) at 7 am.  I rode along the dike separating the Nelson and Long Pond Units, but found little activity.  Marsh Wrens were singing in the Long Pond Unit, and I did see a large Common Snapping Turtle in the middle of a freshly tilled farm field in the Nelson Unit.  The first of several Common Gallinules also made an appearance.

The winds began to pick up as I reached the North Causeway.  It appeared that a storm was brewing to the south and heading this way.  The dark skies made for a nice backdrop for the cattail marsh in the Long Pond.  I created this panorama from about 6 separate frames.

I moved slowly down the side of the dike and sat for a good 15 minutes listening to it call from just on the other side of the canal.  But it wouldn't show itself.  With the winds starting to blow and raindrops starting to fall, I decided to look for some cover: along the Huron River side of the dike.  There, I posted the sighting and waited for the pending storm to pass.

I then got a text message from Adam Byrne, who had just arrived to do a shorebird survey.  He offered to pick me up, so I called him and waited for him to arrive.  Of course the King Rail decided to stop calling as he pulled up in his van, and would not start calling again until after he dropped me off two hours later.

We drove up to Cell 3, where we spotted a couple of Black-bellied Plovers on the mud flats near the water's edge.  Adam pointed to a flock of Ruddy Turnstones that was flying in; 24 birds in all.  A Greater Yellowlegs was the only 'large' shorebird we could find. As we attempted to scan the shorebirds the rains started coming down in earnest.  We decided to pack up the scopes and drive around the Banana Unit to look for any oddities.  Some late-season ducks were still around: Canvasback (female), Common Goldeneye (male and female), and Bufflehead (two males, female).

We then put our scopes on the east shoreline mud spit and found a (presumed) 2nd summer Little Gull and an adult Laughing Gull.  We were just talking about the Little Gull, so it was quite a surprise to see a small gull w/ bold dark carpal bar on the wing and thick black M on the wings.  The surrounding juvy Bonaparte's Gulls were a bit larger in size and showed more uniform gray on their heads (which will eventually turn to black).

Just as we were about to drive around to the east dike the Little Gull disappeared over the rocks.  We decided to go anyway, hoping to get some pics, but the whole flock would fly off just as we headed into view of the mud spit.  We would eventually refind the Laughing Gull among the other gulls in Cell 3, but the would dip on the Little Gull.

The rains returned, this time w/ a vengeance.  We drove back around the Vermet Unit, but found few birds of note.  Back along the Middle Causeway, along the south shoreline we spotted a small flock of Black-bellied Plovers, which looked beautiful among the dark stubble lining the shoreline.  But they flew before I could get the scope on them.

Adam drove me back around to the North Causeway to get my bike, and took off just as the rains picked up again.  Just as he was pulling away the King Rail started calling again.  Made me wonder if his van was visible enough to stifle any vocalizing from the bird.

Thoroughly soaked and covered in mud, I rode out the Siegler Rd. entrance and rode my bike along US Turnpike Rd. to the car parked at Mouillee Creek.  It would take the rest of the day for my gear to dry. Luckily I managed to keep any mud / rain off the 300/2.8 VRII.  Whew...