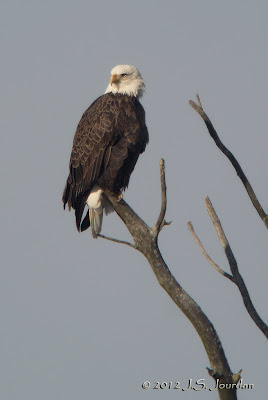 Today was the first day in over a week that didn't have heavy clouds, rain or wind.  It was clear and cold (30F) and calm, so I headed out to Crosswinds Marsh (Wayne Co.) to see if I could find a Northern Shrike.

As I drove along Haggerty Rd. near Arkona Rd. the woods behind the fence were alive with the sounds of unhappy American Crows.  I spotted a Great Horned Owl through the branches being harassed by dozens of crows.  Unfortunately for me the owl was backlit by the rising sun, so digiscoping through the fence, trees and sunlight was a recipe for disappointment. 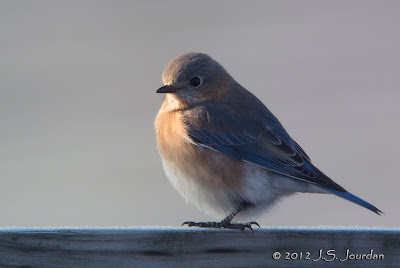 Parking the car inside the park I grabbed the scope and hiked the Bald Eagle Trail.  A half-dozen Eastern Bluebirds were flitting from tree to tree ahead of me, and made it impossible for me to get any digiscoped images from 100' away.  I managed a single series of pics of a female bluebird as she perched on the rail of the fishing pier.  The birds were (again) backlit by the sun, and would not permit me to pass them.

The marsh was icing over, so there were few birds on the water.  A pair of Mute Swans and a dozen Canada Geese.  Ring-billed Gulls were roosting off in the distance, and scoping them produced only a few Herring Gulls.  Overhead a few Blue Jays and Northern Cardinals were moving, while a few American Tree Sparrows were chipping in the underbrush.

A single Bald Eagle was roosting in the marsh near the nest that is located along the south side of the park.  I managed a few distant digiscoped images, but hoped for closer views.

With the sun finally at my back I came upon a dozen Eastern Bluebirds and several Northern Cardinals working the ditch ahead of me.  The birds were glowing with the morning sun on their backs, but they were moving and would not allow me to get any digiscoped images.  I had to settle for nice binocular views.

I would not find the shrike, and could not relocate the owl, but did see a pair of Red-tailed Hawks roosting in the distant trees.  As I was leaving the park the eagle was spotted closer to the east trail, so grabbed a few more images through the scope.