Robin and I have just made plane reservations for a 2-week trip to Nairobi, Kenya in July.  We will have the opportunity to visit Amboseli National Park, and the Masai Mara National Reserve to (hopefully) witness the annual Mass Migration of ungulates across the Mara River.  We will be traveling with our friends Guy, Andrew and Sandi, and spending the time in Kenya with 'their' family members Nerisa and Charles.  It will be a lifetime trip for both of us.  We can't wait!

Guy has been to Kenya on a number of business and safari trips, and has kept personal blogs on his experiences.  For me it is a great reference for what to expect when we'll be there.  He was there in 2010 and reported his adventures at the Masai Mara National Reserve with a number of blogs. He reported on the Mass Migration with another set of blogs here. With yet another set of blogs he reports on his experiences with the people of Kenya. We'll be visiting the National Museum of Kenya, as well as Amboselli National Park and Lake Nakuru. We'll be staying at a couple of Sopa Lodges in Masai Mara and Amboseli and at the Mara Serena Lodge in Masai Mara.

In the meantime, I had the opportunity to do some digiscoping from the balcony of our apartment at the Animal Kingdom Lodge in Orlando this past week.  Though the animals aren't necessarily 'wild', it was still a wonderful opportunity to get some wonderful views of some of the animals we hope to be able to photograph when we're in East Africa in a few months.  Enjoy! 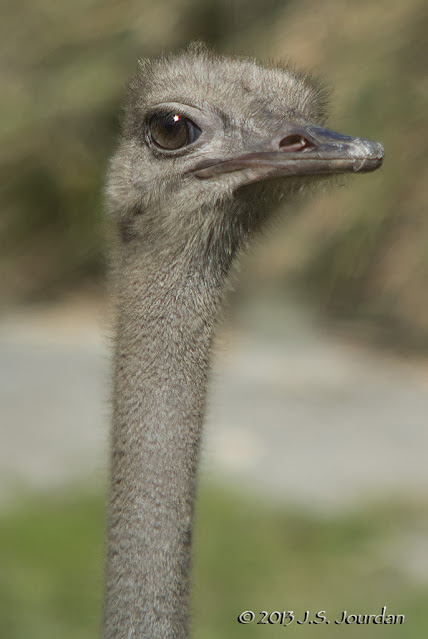 Most likely a juvenile Common Ostrich, this could also be a Somali Ostrich, which shows a gray neck and legs.  Common Ostrich (adults) are normally pink necked and legged. 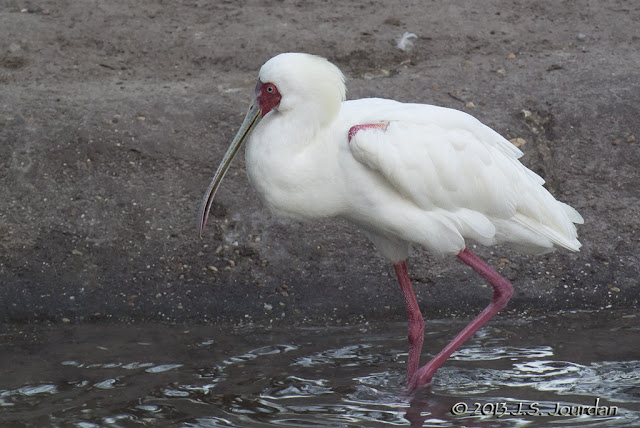 What do you get when you cross a White Ibis with a Roseate Spoonbill? An African Spoonbill! 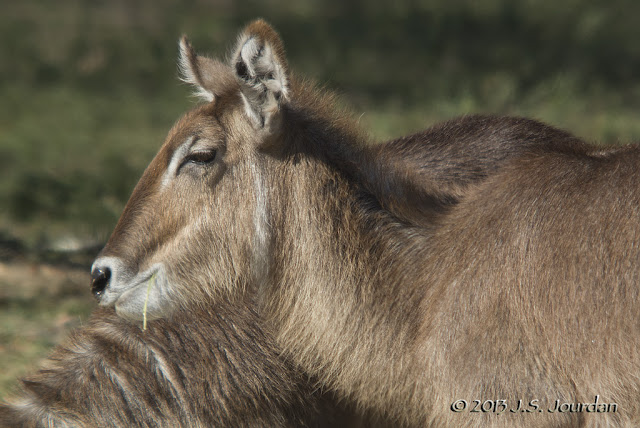 Common Waterbuck are large, shaggy antelope w/ a white bulls-eye on its rump. 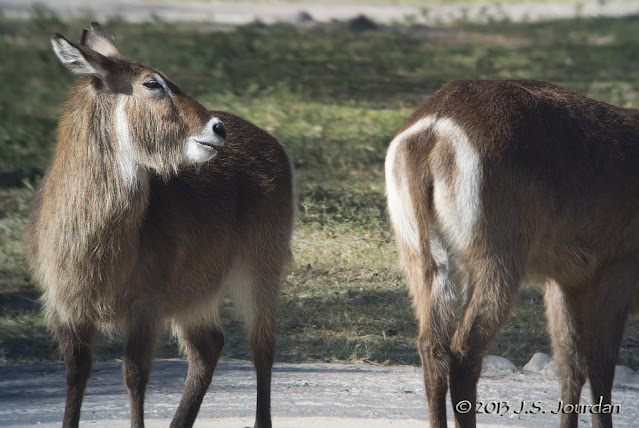 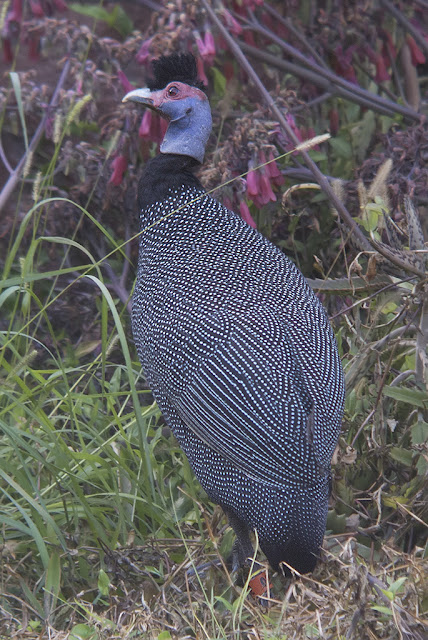 Crested Guineafowl were roving in small packs just below the balcony. 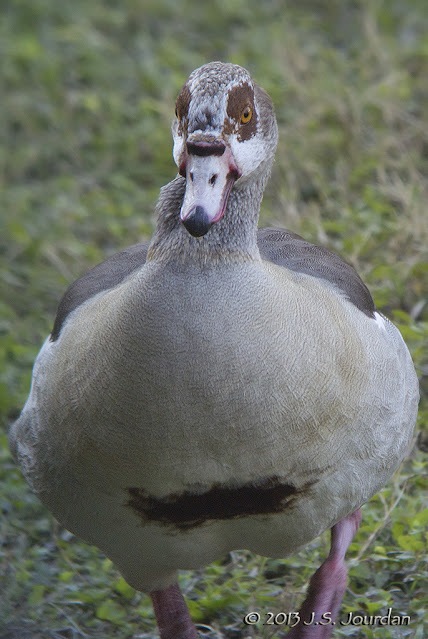 This Egyptian Goose had issues with all the animals in the vicinity.  He would not back down from any of them. 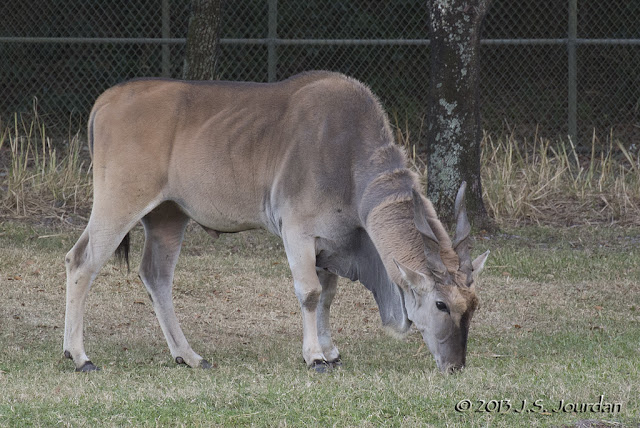 Largest of the antelopes, this Eland has knee tendons that 'snap' when it walks.  Audible from hundreds of feet away.  Cool! 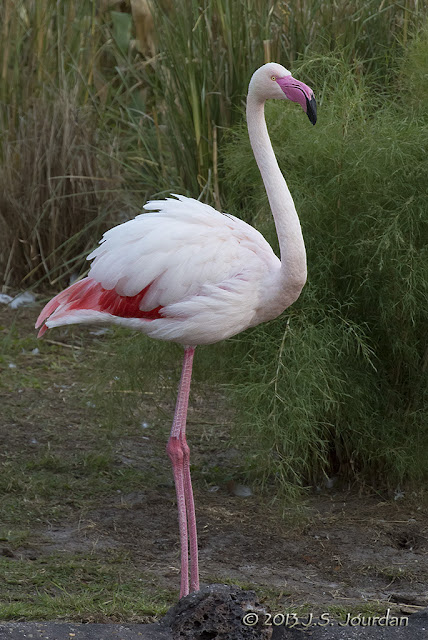 Greater Flamingo were tucked behind the courtyard in a small pool with a Common Shelduck, a pair of (?) Gray-headed Teal, and the African Ibis. 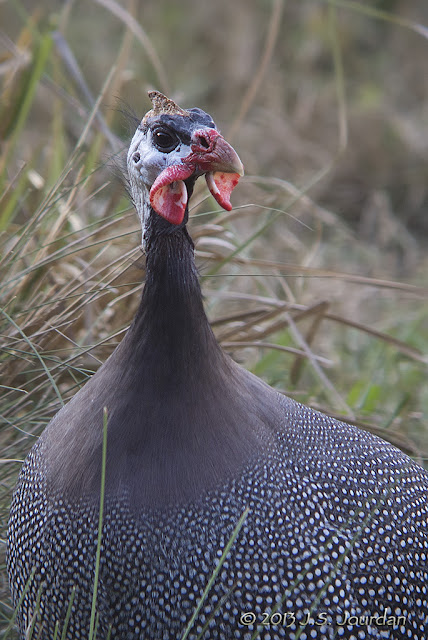 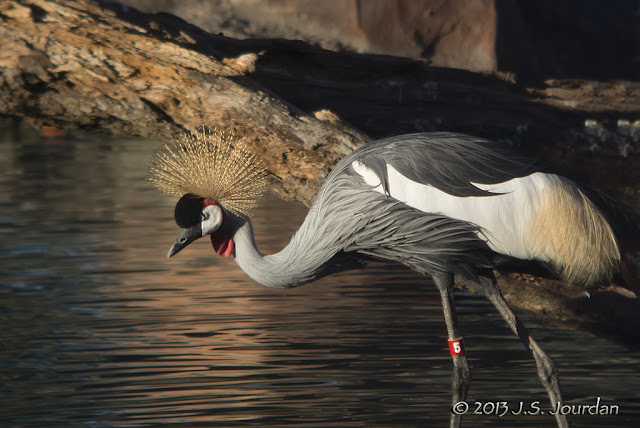 The Grey Crowned Crane is not grey-crowned, but a a grey crane w/ a crown... 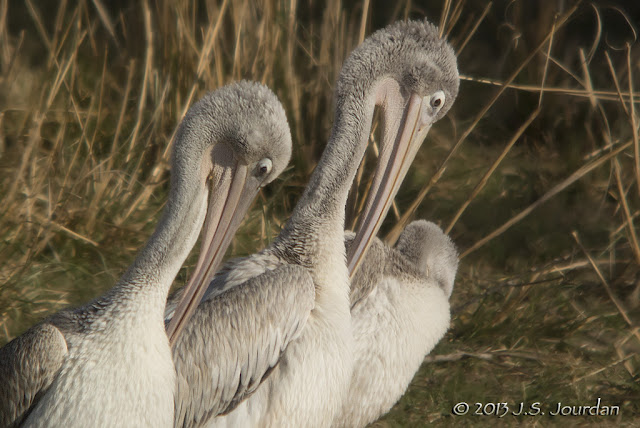 Pink-backed Pelicans are about the dullest-looking birds in the world.  Can't wait to see them in the wild! 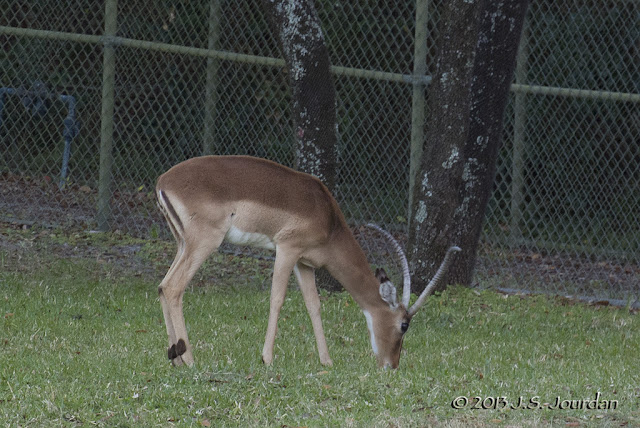 Impala are best ID'd by their two-toned brown coloration and black ankle-tufts. 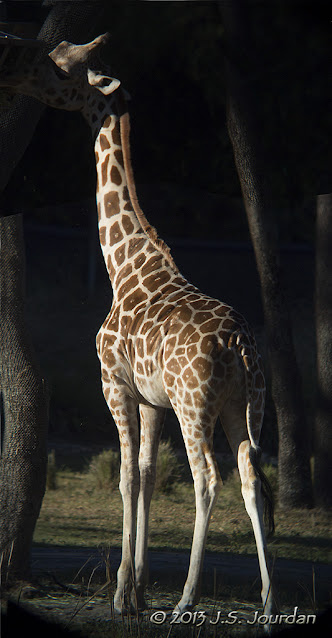 There were five Reticulated Giraffe in the park.  We're hoping to see the Masai Giraffe, and possible some Rothschild's Giraffe. 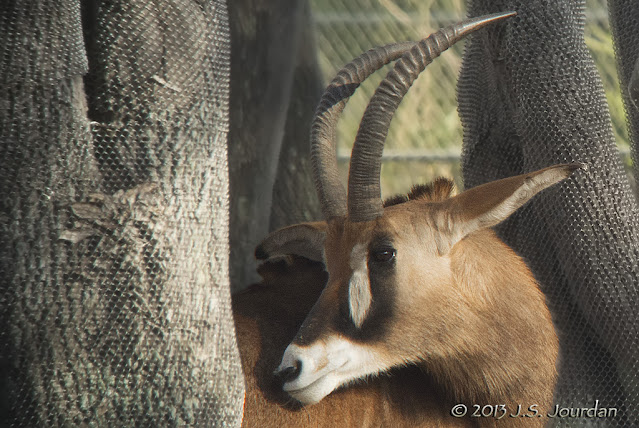 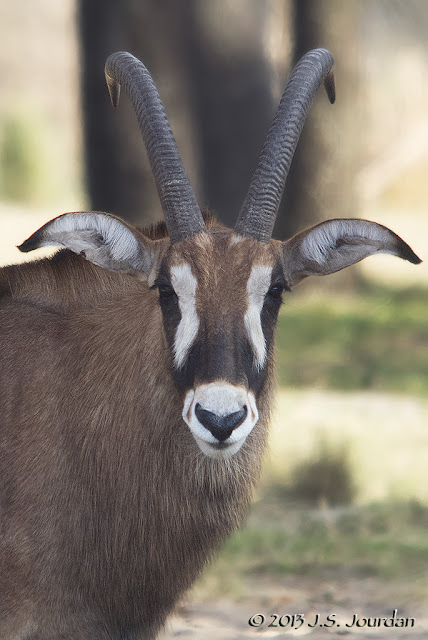 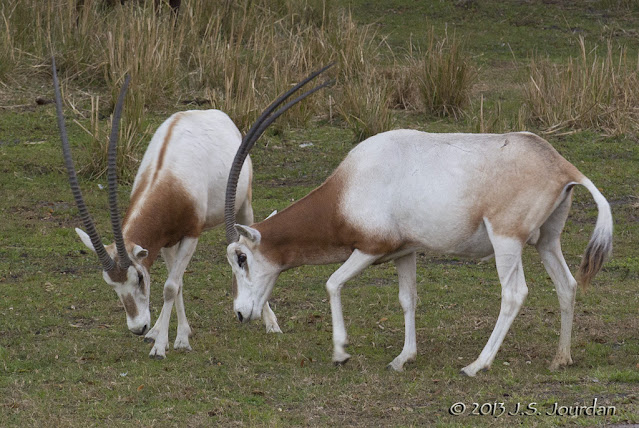 Scimitar-horned Oryx are not found in East Africa (according to my guide), but these two were butting heads for quite a long time. 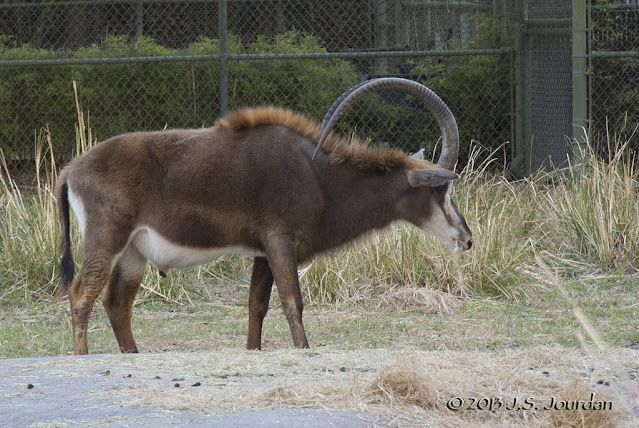 Sable Antelope have some deeply-curled horns.  The females have horns that sweep back toward their back. 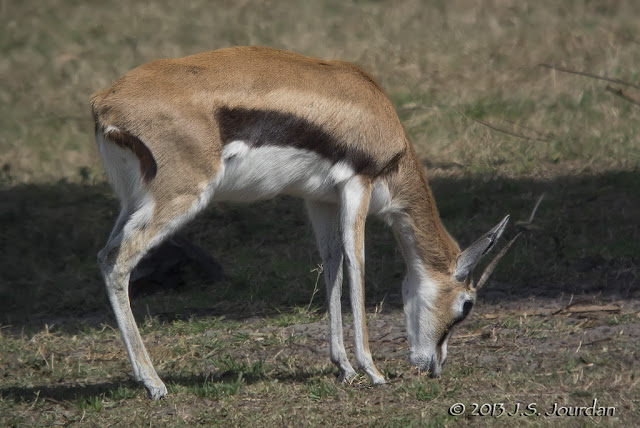 Thompson's Gazelles are just the prettiest little guys.  The black stripe along the flanks distinguish it from the similar-looking Grant's Gazelle. 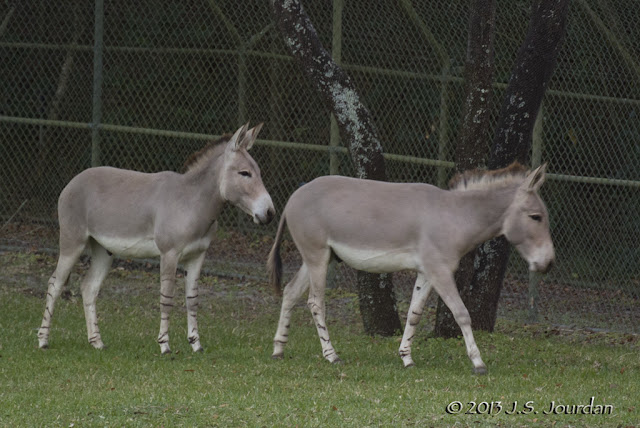 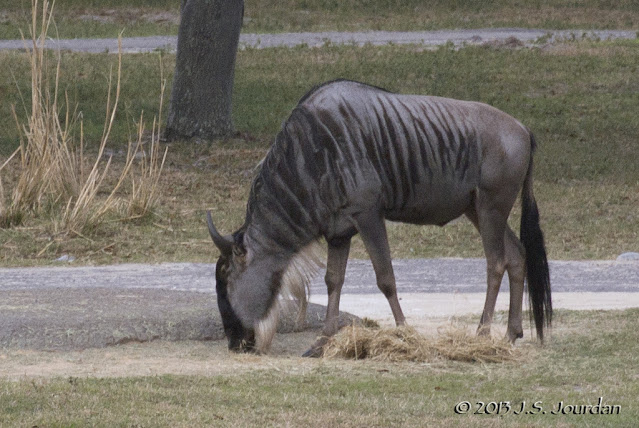 Wildebeast will be the most numerous ungulate on the plains, and will reach populations of a million and a half by mid-August.  They'll have to deal w/ the Mara River crocodiles during their migration. 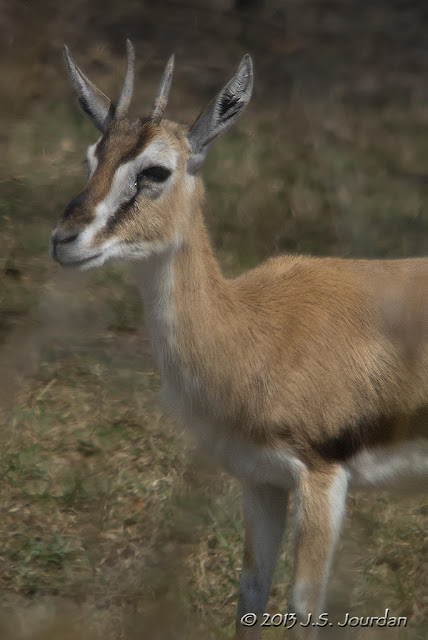 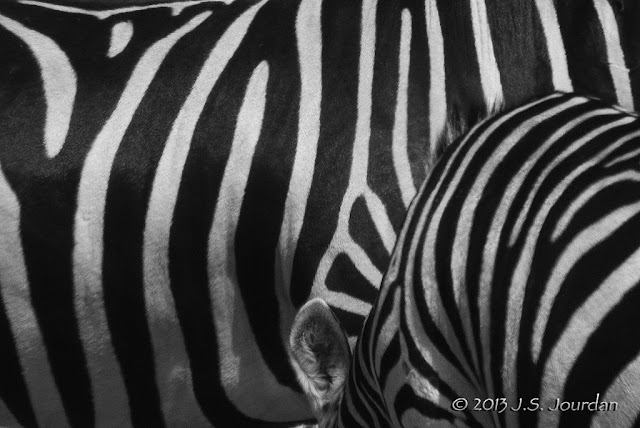 Common Zebra are broader-striped than the smaller Grevey's Zebra.  The black-and-white striping is supposed to deter biting flies, which are confused by the high-contrast patterns. 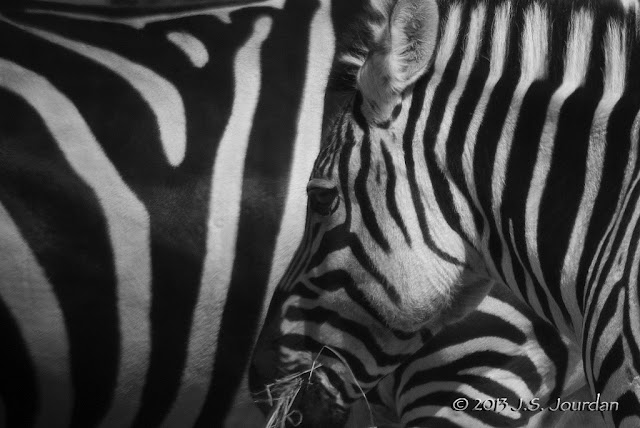 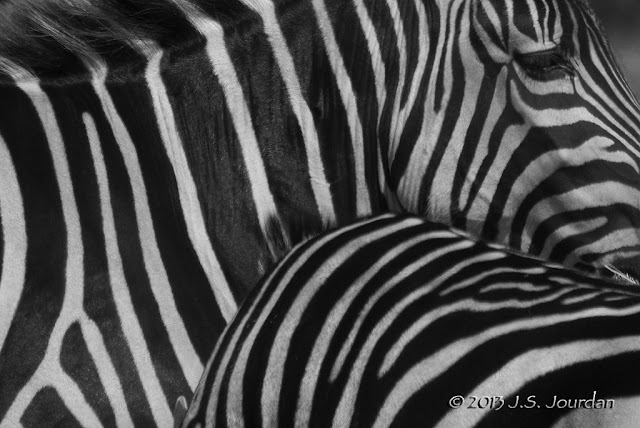 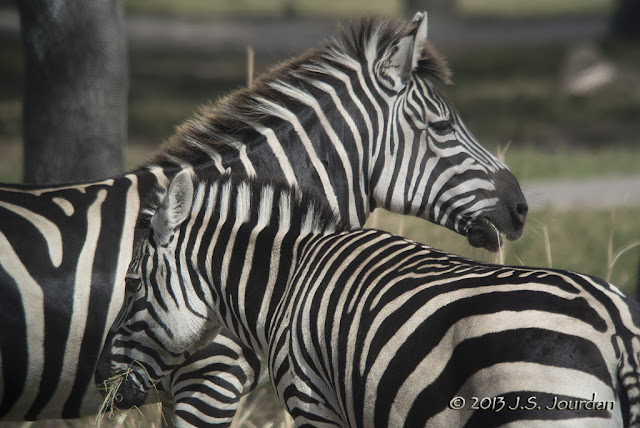 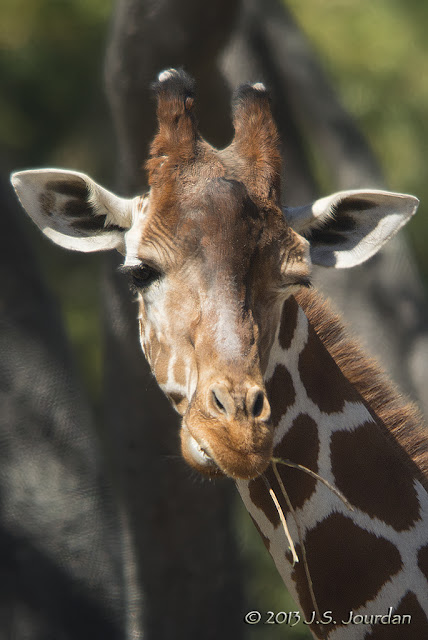 This is spectacular. We are so pleased to see this (and to see these beautiful photographs). Oh, we're going to have such a good time together.

I'm having a very elephant-thinking-about day today (which you'll find out about soon enough) and I specially want to thank you for the references to my posts. Really appreciate that.