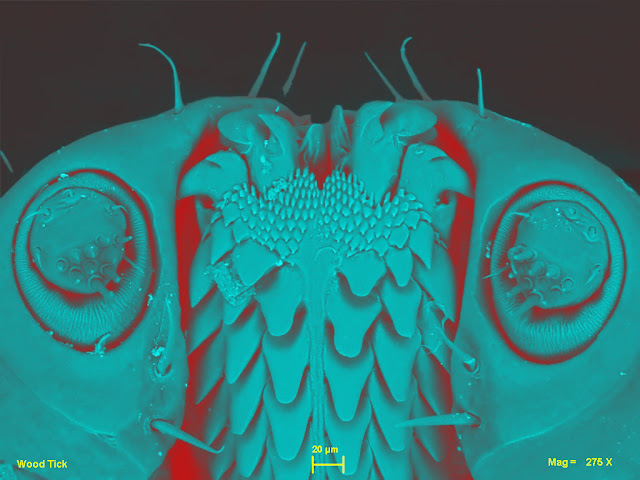 I wrote yesterday that I had come home w/ a couple of ticks on my clothes after a visit to Crosswinds Marsh in S. Wayne Co. It was a bit unnerving to sit at the computer and feel something crawling behind my ear. But it was worse after showering, washing clothes, and still finding a second tick crawling on my neck! So I'm at work this morning talking w/ Dan when I feel something crawling on my neck AGAIN!!! Holy Frick, another Tick! So not only would I spend the rest of the day scratching at my scalp looking for more ticks, but went home and did a massive cleanup of my vest, shoes, hat and anything else I could've come in contact w/ yesterday. But I also spent a little time investigating my new arch-nemesis. 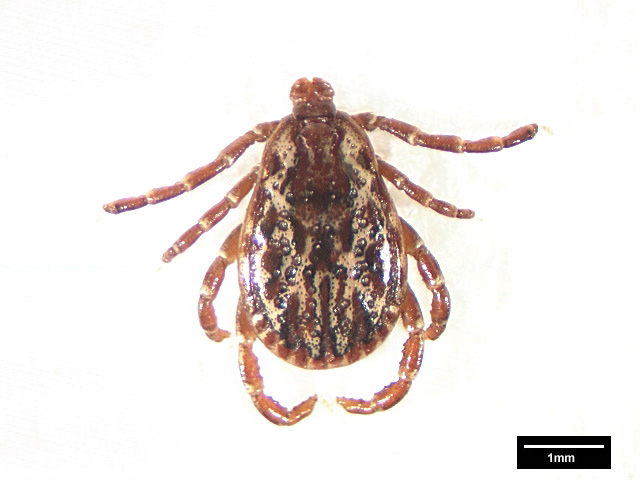 The tick found itself under the stereomicroscope in the lab. The pattern and coloration on its back is consistent for a Dog Tick (Dermacentor variabilis), also called a Wood Tick. This was good news since I didn't have to worry about getting Lyme Disease - just Rocky Mountain Fever or Tularemia.  Lyme Disease is transmitted by the the Black-legged Tick (formerly called Deer Tick), Ixodes scapulars, which is more plain red all over its back.  This article describes the differences between the two most common ticks in Michigan.  Here's an article describing the five species of ticks in Michigan.  This article describes the untreated illnesses resulting from tick bites.  Apparently a Black-legged Tick has to be attached to its host for 24-48 before the bacteria Borrelia burgdorferi can be transmitted and cause Lyme Disease. 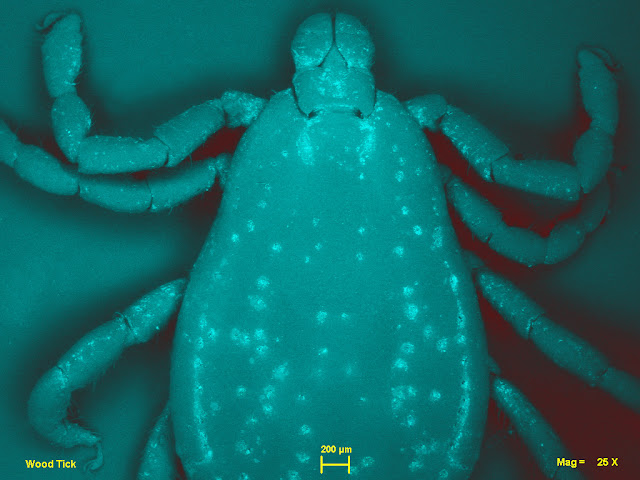 After taking a few photos of the little biter I decided to throw it in the Scanning Electron Microscope (SEM) to see its microsctructure at a bit more magnification and resolution.  The tick was affixed to an aluminum SEM mount using double-sided carbon tape, and imaged at 10KeV accelerating potential using variable-pressure backscattered electron imaging (VP-BSE) mode. In this mode image contrast is based on differences in atomic number (Z) with higher-Z elements appearing brighter.  For most bugs like this tick the contrast is relatively uniform, except in places where it may have picked up inorganic debris (in this case mostly aluminum silicates).  I applied some false-color to the images by selecting (in PS CS6) the  Channel Mixer, selecting Red as the Output Channel, and moving the Blue Source Channel to -200%, followed by increasing the Constant to +25%. 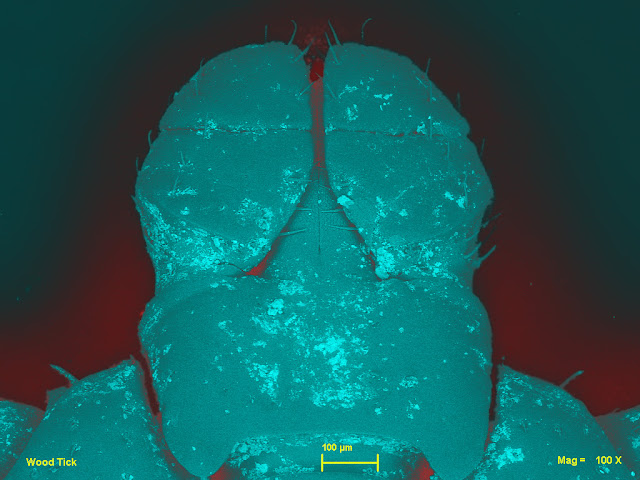 From the dorsal side there's not much to look at w/ this critter.  He's pretty well armored with only a few sensory hairs sprouting from its shell. Only a small portion of its sucking mouth parts are exposed below the lobed portions of its head, called the Capitulum. The capitulum is attached to the Basis Capitulum, or the large rectangular plate at the bottom of the image at left. 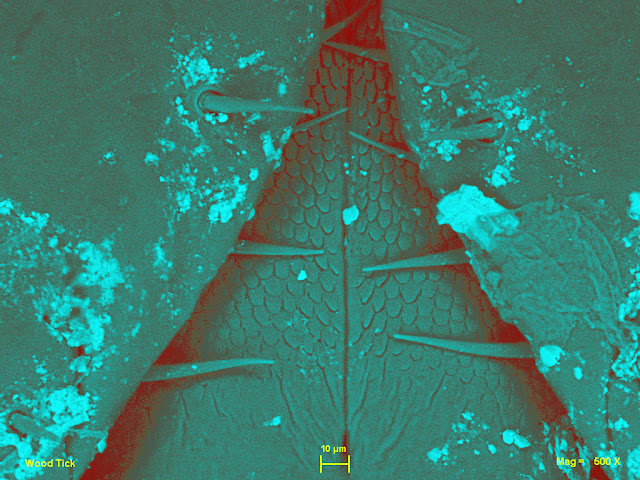 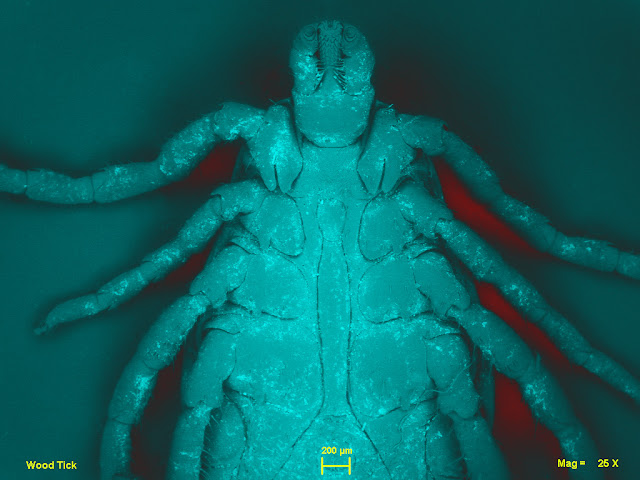 Things look a bit more interesting when he's on his back (ventral side).  From the head on down there are four legs on each side, with Leg I being closest to the head, followed by Leg II, Leg III and Leg IV. 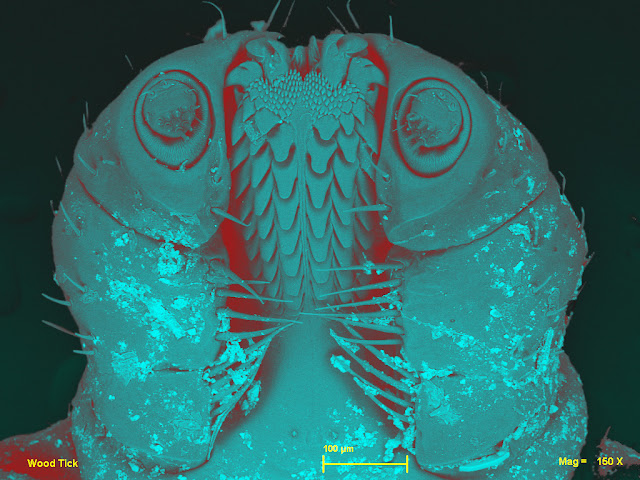 A closer look at the Capitulum shows  what appears to be 'eyes' on the lobes or Palpi.  Actually, the tick's eyes are located on the dorsal side of the shell next to the Leg II position! These tiny appendages are part of the Articles of Palpi.  The sucking mouthpart is called the Hypostome, and it looks a bit like a lamprey's mouth.  For more information about Tick Anatomy, check out the Key at the University of Lincoln in the UK. 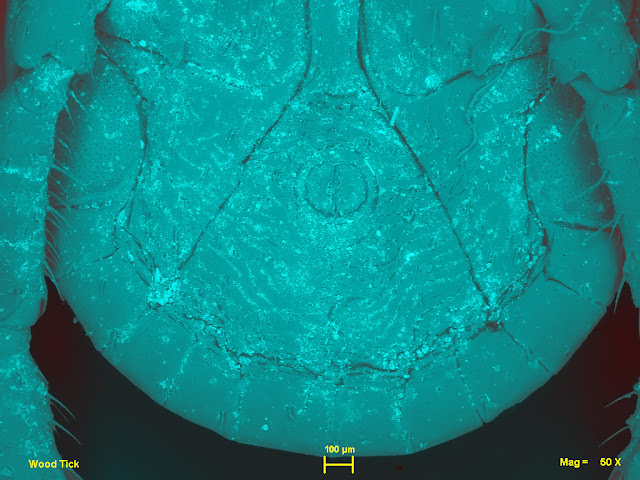 The ventral portion of the shell gives a nice view of the tick's Anus surrounded by the Genital Groove. 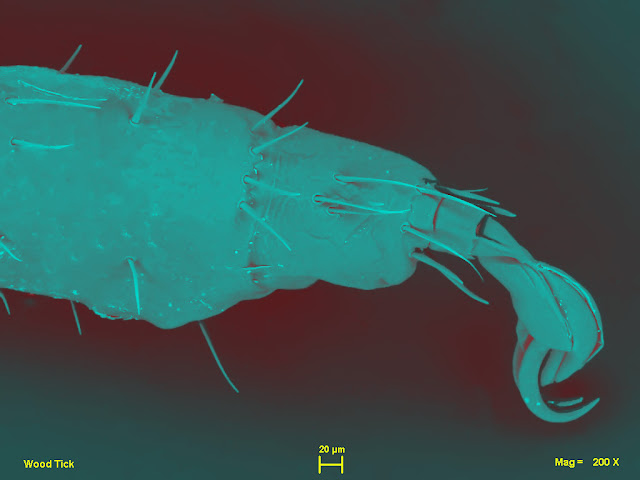 At the terminal end of the legs are the Tarsus, Pad and Claws.  The Pads will swell as the tick walks, providing additional suction in addition to the claws that are at the very end.  The pads help out on smooth surfaces where the claws have nothing to hold onto.

So, after a bit of study I'm feeling a bit better knowing that I'm not gonna get Lyme Disease from my encounter with this critter.  Still, I find myself scratching at my head and neck just to make sure I'm not playing host to to the next generation of tick-dom.  For those of you who may encounter a tick attached firmly to your skin, make sure not to squeeze it while removing it - this will only cause it to regurgitate bacteria into the wound.  Use a pair of tweezers and gently pull the head out.  Drowning the tick in oil or nail polish can also cause the tick to regurgitate, so best go the tweezer route to remove the beasts.