With Pt. Mouillee SGA set to close on September 1st I made one last trip to look for shorebirds. It was warm but cloudy so photography opportunities would be hard to come by. So, I decided to devote most of the day to videotaping shorebirds. 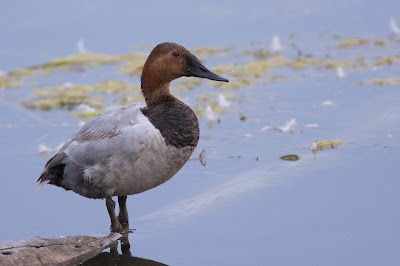 I did grab a few pics first thing. A Canvasback was an out-of-season surprise for the area. Common in winter, only a handful of birds are seen in the summer. This was my first. 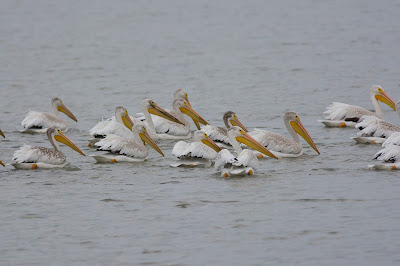 A flock of American White Pelicans were roosting in Cell 5, so I grabbed a few pics of the 60 birds floating by.

I rode out to the NE corner of the Humphries Unit and found a myriad of shorebirds working the stubble along the shoreline. Wilson's Snipe were most numerous with over 24 counted. A Baird's Sandpiper and several Stilt Sandpipers were the highlight, followed by Lesser Yellowlegs (20), Pectoral Sandpipers (18), Short-billed Dowitchers (8) and Semipalmated Plovers (12) nearby. I spotted a single Red Knot ~50 yds. away, so I could only scope it. A group of a half-dozen Black-bellied Plovers were also roosting farther inland. I looked for Buff-breasted Sandpipers but could not find any (I would later learn that Mary Tremblay found 2 last nite in the same area, and Andrew Sturgess photographed 3 this morning). This miss on my part will haunt me for the winter.


I continued on to Cell 3 and found the southern half covered with mud. Shorebirds were scattered but consisted mainly of Semipalmated Sandpipers. I spotted a single Willet and a single American Avocet. I spent some time video recording them. Several Short-billed Dowitchers were nearby. I found no Long-billed Dowitchers, Baird's, White-rumped Sandpipers, or phalaropes.


As I was riding out I saw Jim Fowler and the Washtenaw Audubon caravan. I would later learn that many of them saw the Buff-breasted Sandpipers. Good for them. Sad for me.

I will return late in December and look for Snowy Owls. Till then!