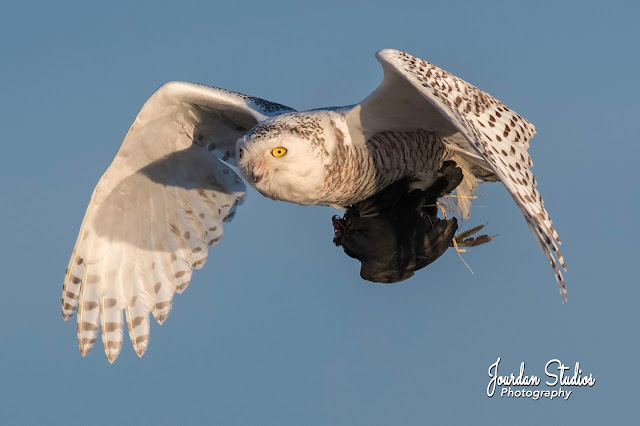 With clears skies and temps expected to reach almost 50F it was time to grab the bike and make a trip to Pointe Mouillee SGA. I hadn't been there since January, so I was a bit anxious to check on the Snowy Owls that still reside there. As of last week as many as 7 birds had been seen. Waterfowl have returned, as well, so there'd be plenty to look for, including recently-reported Eurasian Wigeon and Snow Goose. 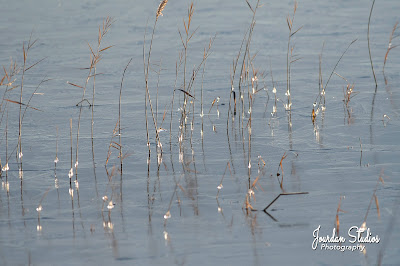 I parked at Mouillee Creek at just before 8 am and rode the Middle Causeway east into the sun. Red-winged Blackbirds and Song Sparrows were heralding the arrival of spring despite the past new nights of temps in the teens. A thin layer of ice was on the pond surfaces, but there was plenty of open water to keep the Mallard, Wigeon, Gadwall, Northern Shovelers, Northern Pintail, Greater and Lesser Scaup, Redhead, and Ring-necked Ducks happy.

As I approached the junction of Humphries, Long Pond and Vermet Units, I spotted a Snowy Owl crouched next to the inside dike of the Long Pond. Someone carrying a large lens, Better Beamer and tripod was approaching the bird from the other way. Since I was looking at the severely backlit bird I figured I better get past it before it got spooked by the oncoming photographer. I rode past the bird and got off the bike while it just sat scanning its surroundings. I was across the dike and posed no threat. 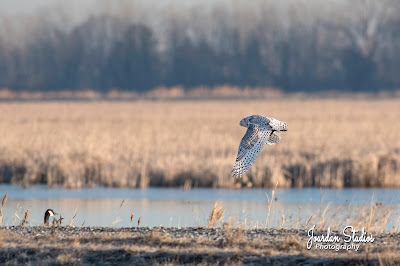 Sure enough, the other person took a few photos of it while I watched from the other dike across the canal. As he continued to approach the Snowy Owl flushed and headed west. It then circled south and flew back eastward toward me! All I had to do was raise the Nikon D500 / 300/2.8VRII and fire away as it flew past me illuminated by the glow of the morning sun. Gorgeous! I could even see it turn its head and look at me while flying by. The snowy was carrying a fresh-killed American Coot, as well. 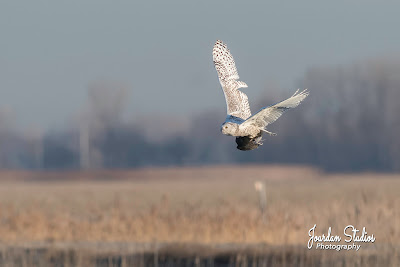 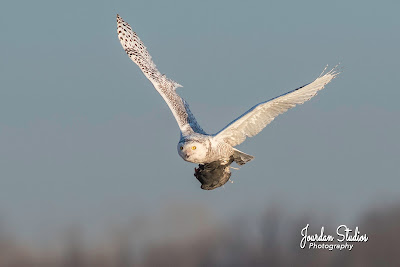 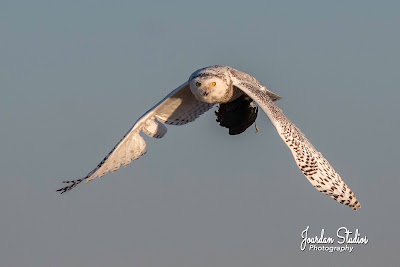 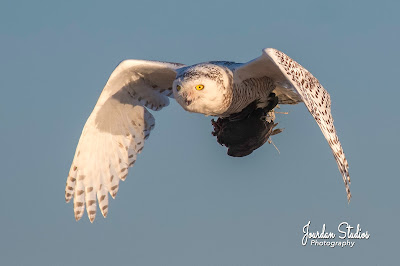 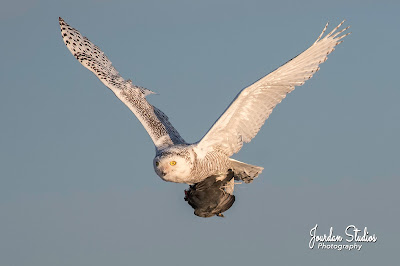 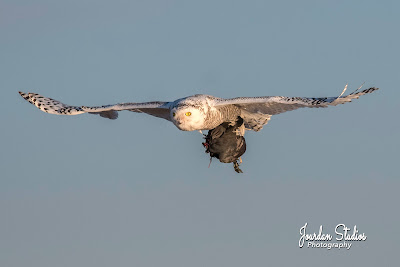 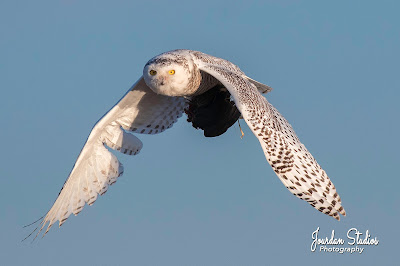 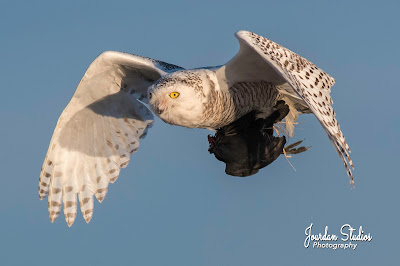 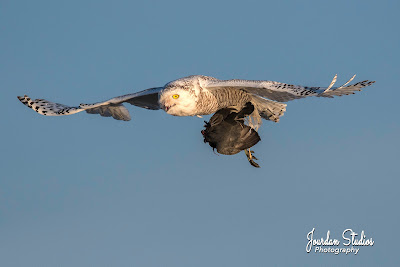 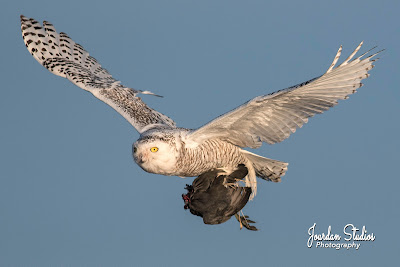 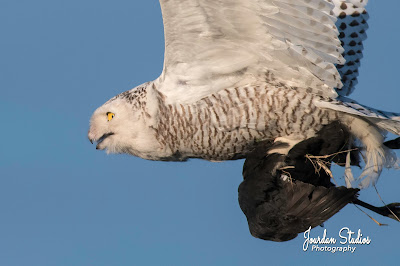 I don't know if the photographer was upset at missing his shot(s), or was angry with me for getting the shot(s), or if he thought I was responsible for it flushing. But, as we approached each at the junction I tried to let him know that the owl had landed just up the causeway, and if he walked carefully he could get a few more pics. All he did was mutter, "F*k, F*k, F*k, I don't care" and continued on past me toward the owl with no regard for the fact that I was about to digiscope it from 50 yds away. Sure enough, the bird flushed and flew toward the North Causeway, so I decided to mount up and head toward the Banana Unit. 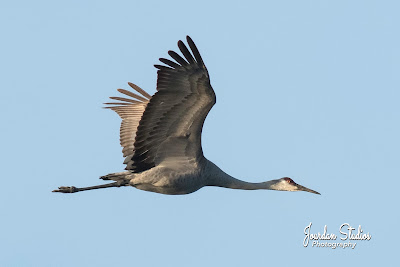 I stopped long enough to see a pair of Sandhill Cranes in the grass next to the causeway and fly off back to the west as I approached.

As I passed the radio tower the sun was directly ahead of me and blinding me from the trail ahead where a second Snowy Owl was sitting. All I could see was a shadow lift off and head up over the burn to somewhere in the Banana Unit. But, as I sped up to get up the hill onto the Banana Unit the owl was perched right at the top of the hill, so all I could do was look at it as wide-eyed as it was looking at me. It flew to the north, as well.

Cell 4 was loaded with ducks, as was the Humphries Unit. Dozens of Northern Pintails resting on the ice were nicely illuminated by the rising sun in the Humphries, while dozens of Bufflehead, scaup, and Red-breasted Mergansers swam in the open waters of the cell. I wanted to get to the south end of Cell 3 and loop around to see if any other Snowy Owls were around, so I didn't stop to scope the scene. 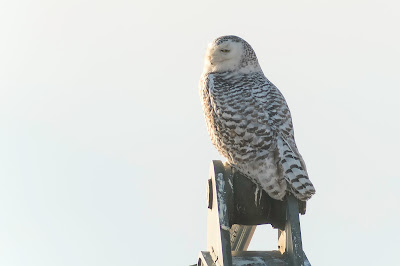 As I reached the southeast corner of Cell 3 I spotted another Snowy Owl perched on a large tractor. I spent about 30 minutes slowly approaching it a few steps at a time to try and digiscope it without spooking it. But again, the sun was directly behind it so I had to get around to the north to get a better view. With no other recourse I walked the bike slowly toward it without looking up (hoping it might ignore me), but it flew toward Cell 3 along the Lake Erie shoreline. 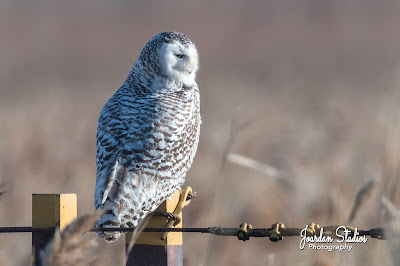 I would catch up to it and get a few digiscoped images from the dike as it rested on railings just inside the cell. I spent 15 minutes watching it before it decided to lift off and fly back to the tractor. 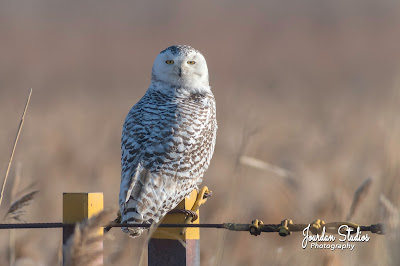 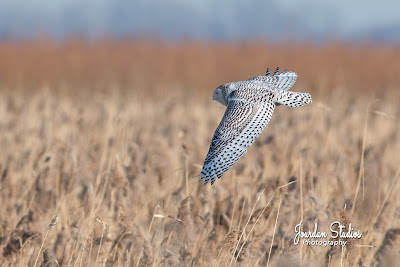 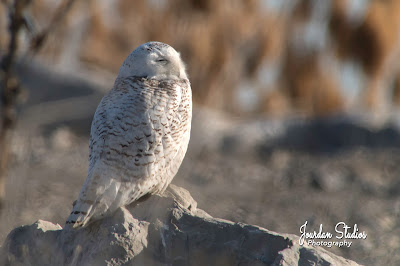 I then headed back toward the North Causeway along the east side of the Vermet. I spotted another Snowy Owl quietly perched on the rocks just south of the new half-dike jutting into Cell 4. I'm assuming that this was owl #2 that I ran into earlier, so I digiscoped it quietly from about 200 - 300 ft away. It eventually flew off to the edge of the half-dike where hopefully it'll remain unnoticed for the rest of the day. 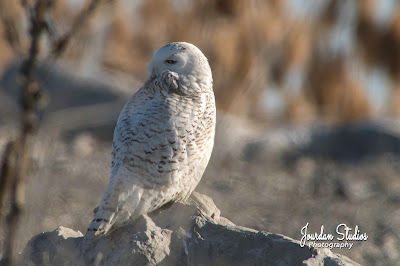 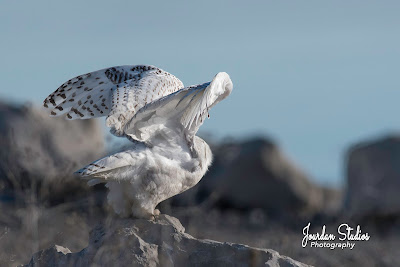 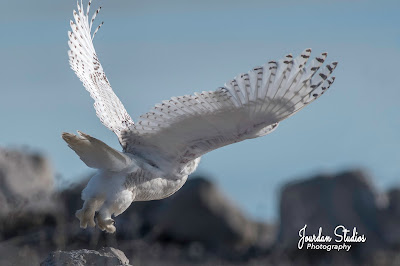 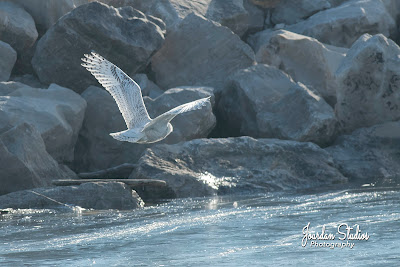 I continued onto the North Causeway where I ran into angry-photo guy. I tried asking him how his day was going, but he ignored me and kept walking. Ouch. I quietly wished him a better day.

The ride back to the car would be uneventful. I did see Don Sherwood in the parking lot and chatted with him a bit before heading to Haggerman Rd and the Antennae Farm.

Lucky for me Haggerman Rd. was dry, because it was deeply rutted even for the Ford Escape. As I drove toward the fenced-off fields I spotted several Horned Larks, an Eastern Meadowlark, then an adult Snowy Owl! It was next to the road up ahead, and as per usual, backlit by the sun. It flew off and landed in the middle of the field back toward U.S. Turnpike.  Just 20 yds beyond a second, juvenile Snowy Owl was roosting on the ground next to the fence about 200 ft away from the road. I continued on past it without disturbing it and headed home.

A nice surprise was waiting for me when I got home. My brother Lou built me a Screech Owl box out of cedar. I had talked to him yesterday and learned that he was building bird houses as a new hobby and enjoying the crap out of it. Thanks, Lou!