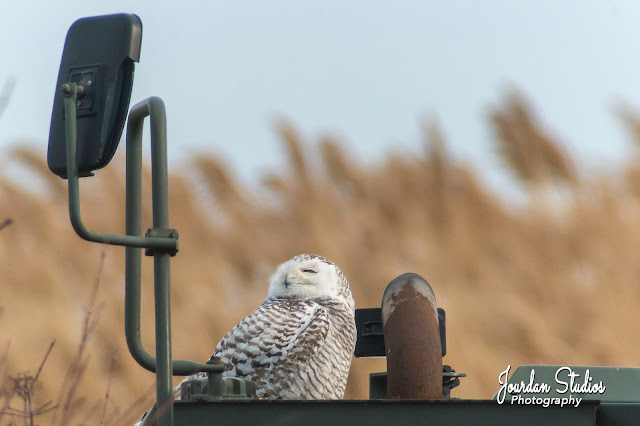 Even the birds are doing it now...

With snow forecasted this evening and cold weather expected for the next week, I decided to make an evening ride out at Pt. Mouillee to look for shorebirds. Skies were clear (but clouding up fast), and winds were calm (but picking up fast).

At 5 pm I started out from the Mouillee Creek parking lot and quickly saw how flooded the creeks and units were. I could expect to see no shorebirds... Waterfowl numbers were light in the Lautenschlager and Bloody Run Units, and the Humphries Unit was hosting only a few dozen American Coot. My only highlight was watching a Great Blue Heron go after a Great Egret out in the field adjacent to the Bad Creek Unit.

Winds were picking up and coming out of the south-southwest, which was somewhat foreboding, since I'd be riding into the teeth of it coming back. Sure enough, as I reached the Banana Unit and headed south I was riding into the teeth of a cold 25 mph wind. A few Canvasback, Greater and Lesser Scaup, Common and Red-breasted Merganser, and Redhead were swimming in Cell 4 while a couple of Herring Gulls soared overhead. 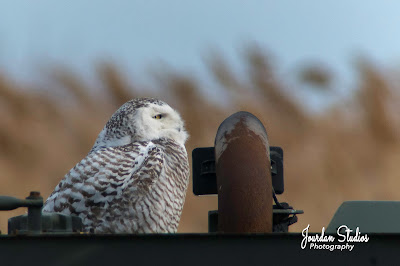 At the south end of Cell 3 I headed east toward the Lake Erie shoreline and the giant green tractor parked in the SE corner of the unit. It had been hosting a Snowy Owl all winter, and I was a bit surprised to see it still hanging around! I would spend the next 45 minutes or so slowly approaching the bird w/ the scope (I purposely left the Nikon D500/300_2.8VRII home - I lost the lens hood and need to wait for a new one to arrive). The trick was to hide behind the scope and backpack and take a step-or-two forward when the owl would turn his head away.

I managed to get within 50' of the bird and digiscope the crap out of the bird for 20 minutes. I alternated between stills, 4K video, and Slow-motion video captures. The bird dozed between head rotations, and occasionally scanned in alarm as passing Canada Geese and Mute Swans flew overhead. 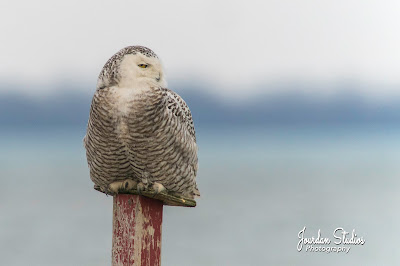 My presence only became a concern when I walked back to the SW corner to retrieve the bike and slowly walked it past. It was beginning to get cold(er) and windier, and I needed to head back north. The owl flew out along the Lake Erie shoreline and landed a dozen or yards on a post next to the dike. I spent a few more minutes digiscoping the bird before it flew back to the tractor for (hopefully) a quiet, undisturbed evening. 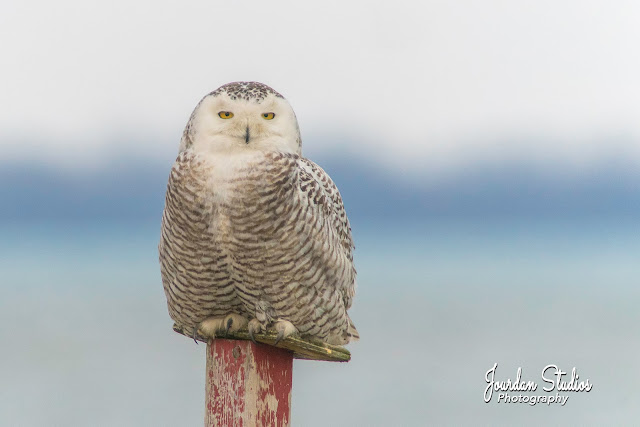 As I rode out past Cell 5 I spotted a second Snowy Owl roosting on a log inside the dried pond just across from the NE portion of the Vermet Unit. I decided not to stop, and continued on toward the North Causeway and back to the car. 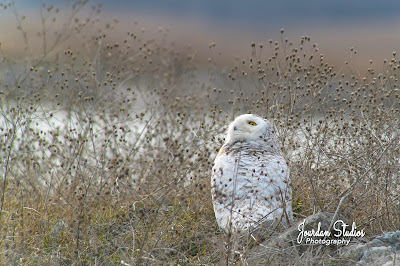 With the sun dropping low above the horizon I spotted a beautifully-illuminated Horned Grebe in breeding plumage. Its golden ear tufts glowed as it swam next to shore, so I decided to scope it in case it might be an Eared Grebe, but the bird dove as soon as I stopped the bike. It would not resurface until well out from shore. I decided not to attempt any digiscoping and reached down to pick up the bike. It was then that I noticed another Snowy Owl next to the shore just 100 feet up the dike! 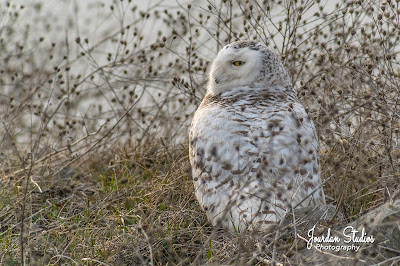 I spent the next 15-20 minutes slowly approaching the bird as it hunkered down in the grass next to the rocks and quietly digiscoped in the now-approaching twilight. I loved how the owl blended in with it surroundings, and waited for it to turn its head so the sun bounced off its face. This would probably be my last Snowy Owl of the season and perhaps my most satisfying encounter. 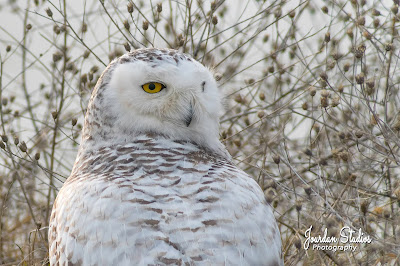 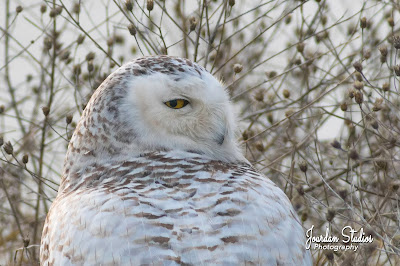 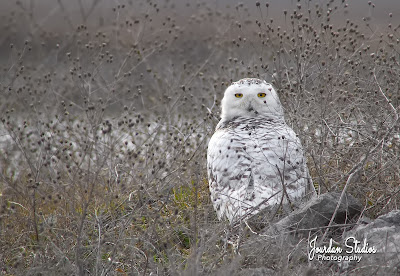 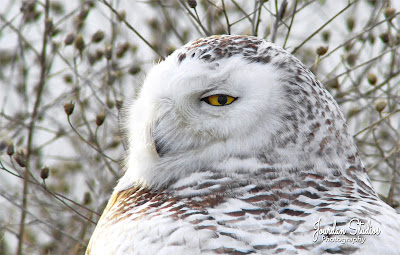 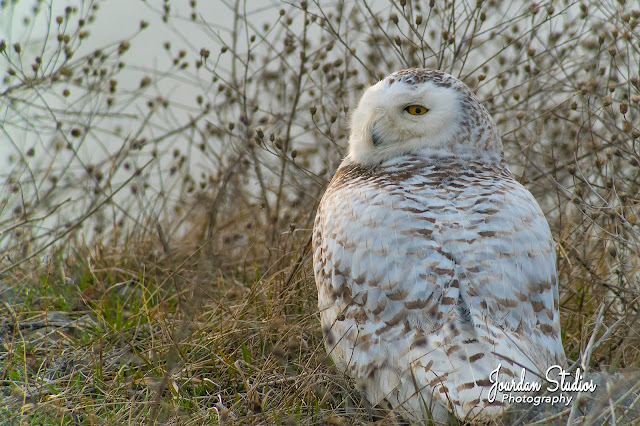 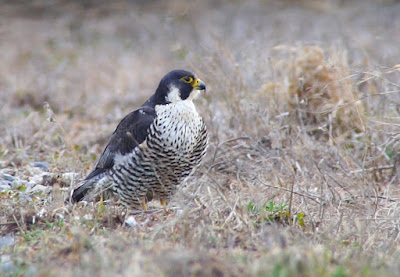 Between the Long Pond and Vermet Units things were quiet except for the occasional Red-winged Blackbird, until I felt the need to stop the bike. Ahead on the trail appeared to be a possible bird in the grass, but I couldn't tell. I had to retrieve the scope before realizing that it was an adult Peregrine Falcon ahead of me. Gorgeous! I just had time to put the video on it before it slowly turned, defecated, then flew off over the Long Pond to the SW. I had the camera on slo-motion video, so the quality was not as good as 4K, but it gave me a couple of keeper frames. It would be a nice ending to a surprisingly great evening. 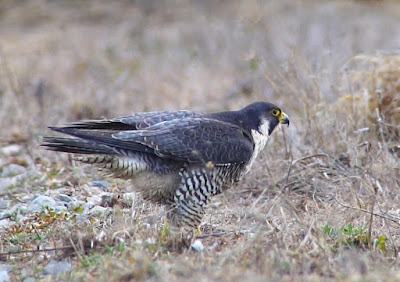 A WARNING for anyone heading down Haggerman Rd. and the Antennae Farm: the road is deeply rutted and has huge mud holes. I had to drive as fast as possible through it the entire length of the road in order to keep from getting stuck. Through mud-covered windows I did not see any birds of note.