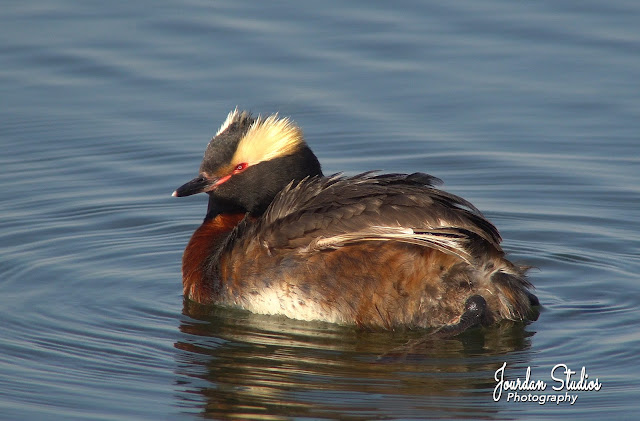 The fall migration season is still about a week away. July 4th is the unofficial start of the fall shorebird season. The first Least Sandpipers, Semipalmated Sandpipers and Lesser/Greater Yellowlegs will arrive to a mudflat near you.  But not tonight.

I haven't been out in several weeks, so I was happy to bike and bird the state game area. Parking at Mouillee Creek I rode out to the Pump House to see if any shorebirds were around. None. The mudflats were covered with vegetation, but still may be worthwhile when the shorebirds do arrive. 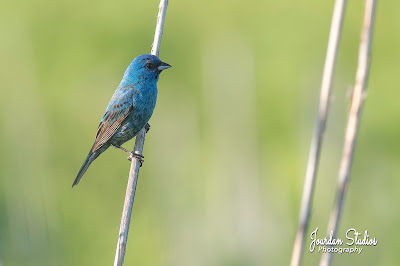 Indigo Buntings were abundant this evening. I spotted several along the dikes, but none were cooperative. I had to take long-distance photos as they tended to flush like a March Pintail. 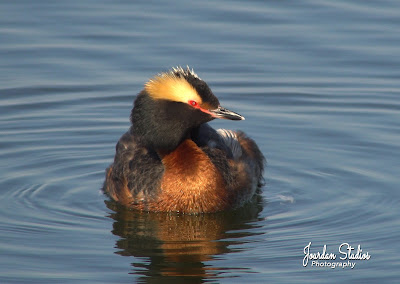 I found nothing exciting to report until I reached the SW corner of Cell 4. I saw several pair of Redhead, and a pair of Lesser Scaup. But one bird was showing a flash of yellow on the head that looked out of place. When I got the scope on it I realized I was looking at a Horned Grebe! Wow, I've never seen one this late in the season. 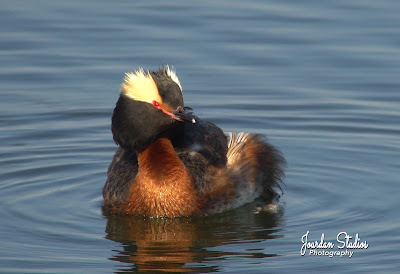 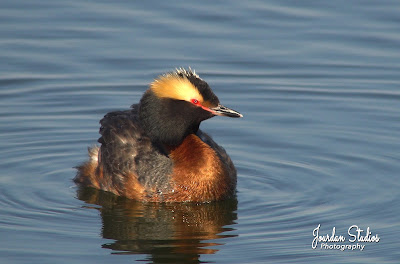 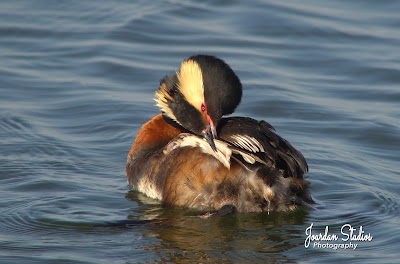 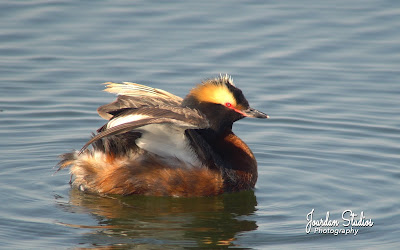 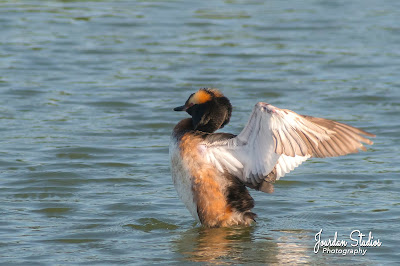 This bird was gorgeous! And, in perfect light, so I spent a half-hour digiscoping it from about 50' away. It kept fluttering its wings while it preened, but then would rise up, flap its wings, and spin 180 degrees before settling back down. 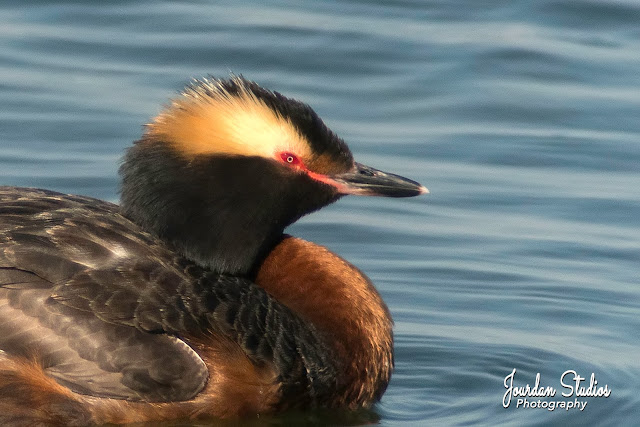 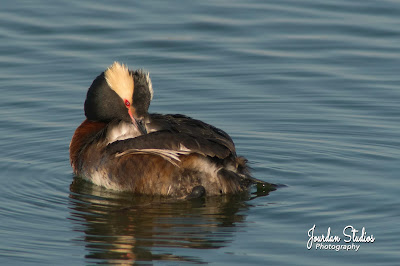 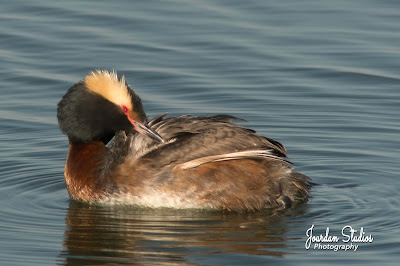 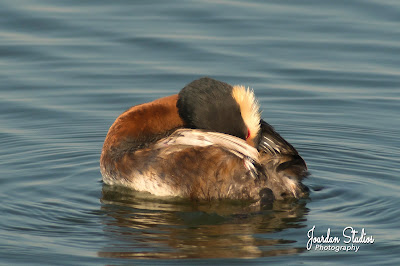 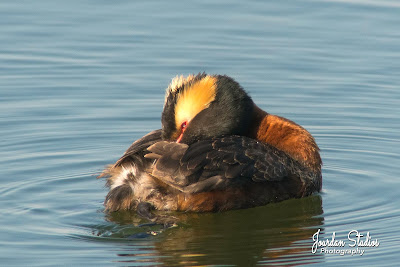 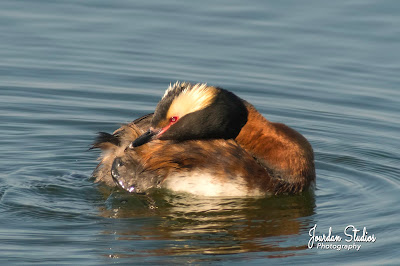 I then circled around Cell 3. There is a patch of open water, but its buried in willow trees. It may attract a good many shorebirds, but some bushwhacking will be required in order to see anything. 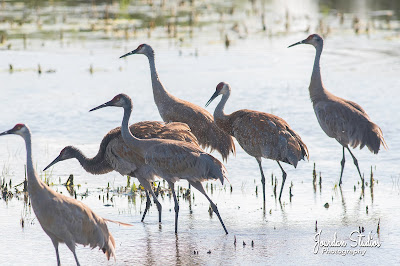 I found a painted turtle sitting in the middle of dike between Vermet and Cell 4, so I picked it up and rode down to the North Causeway where I let it go. In the NW corner of the Vermet Unit I found 9 Sandhill Cranes, plus 3 more that flew in as I moved on. An Osprey appeared overhead carrying a large branch; made for a nice silhouette. 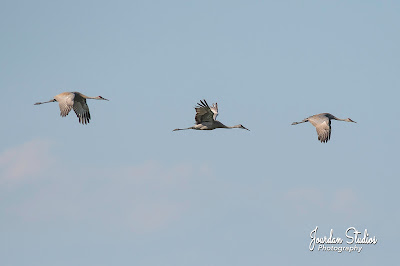 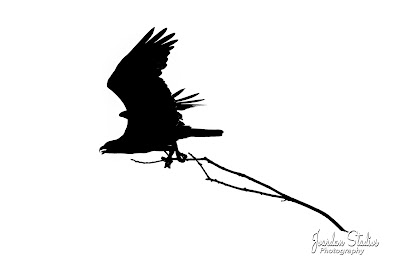 A note to all. If you decide to ride the dike separating the Long Pond and Nelson Units, wear sleeves. I took the dike immediately west of the Long Pond and had to ride "through" 4 ft tall thistle overgrowing the trail. That wasn't so bad until I ran into 6' tall Bull thistle that left me bloodied by the time I got the bike through it. The only good news out of it was learning that the west end of the Long Pond should be good for shorebirds in the coming weeks. 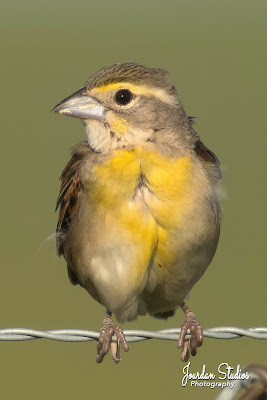 I returned to the car and took a drive down Haggerman Rd. Another word to the wise: Stay to the right side of the road and hug the grass - the center of the road has deep, deep ruts that will eat your car or truck.  But, it was worth the risk as I found up to 12 Dickcissels singing along the fence line and Antennae Farm. Another dozen or so Bobolink were actively nesting in the area, as well.  I was able to get some wonderful digiscoped images of a female and male Dickcissel. 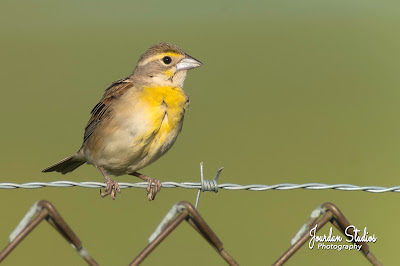 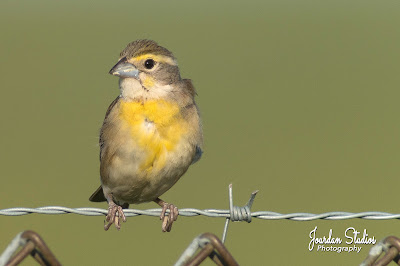 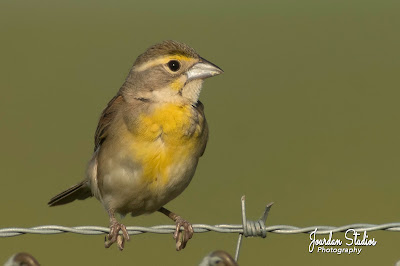 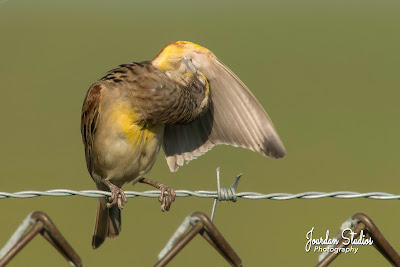 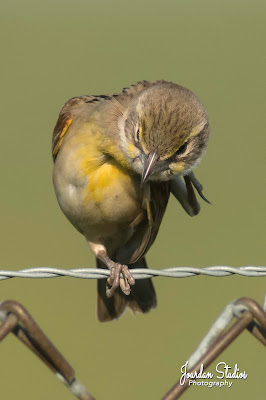 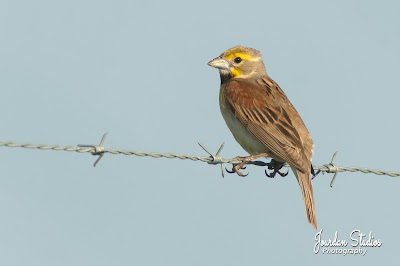 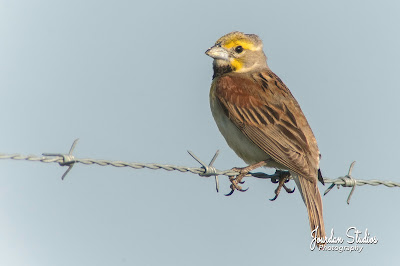 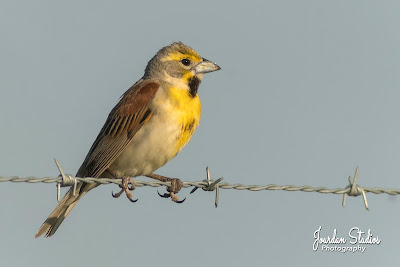