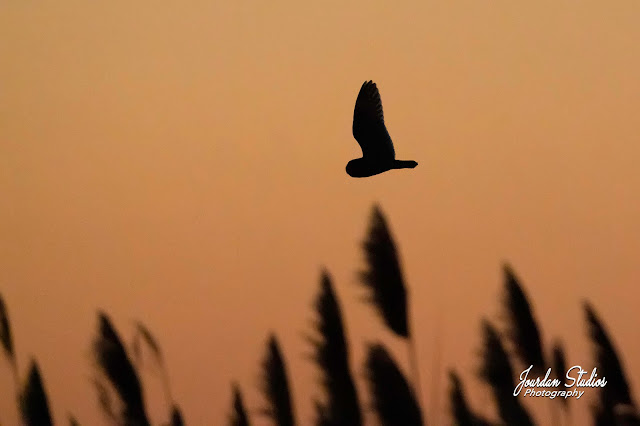 With the only clear skies forecasted for the remainder of the week I took advantage of clear skies and a full moon to get down to Pt. Mouillee SGA for an early morning ride. I was hoping to relocate a number of nice birds reported there, including Snowy Owl, Short-eared Owl, Purple Sandpiper and American Pipit. I was most interested in the sandpiper and Short-eared Owl.
I arrived a Mouillee Creek parking lot at 6:30 am. It was dark, cold (23F), but calm. A full moon floated just above the west horizon but was obscured behind trees, otherwise I would've spent some time digiscoping it. Instead, I decided to try to call in a Screech Owl; I would pull in 2 that serenaded me for several minutes before moving on.
As I began riding the Mouillee Creek east I could start to see the soft glow of the morning dawn. It was still too dark to see the bike tires on the path ahead of me, so I broke through shallow pothole ice several times. By now the moon had cleared the trees so I was able to grab a few pics w/ the 200-600mm lens while I scanned the emerging marsh for flying Short-eared Owls. None. 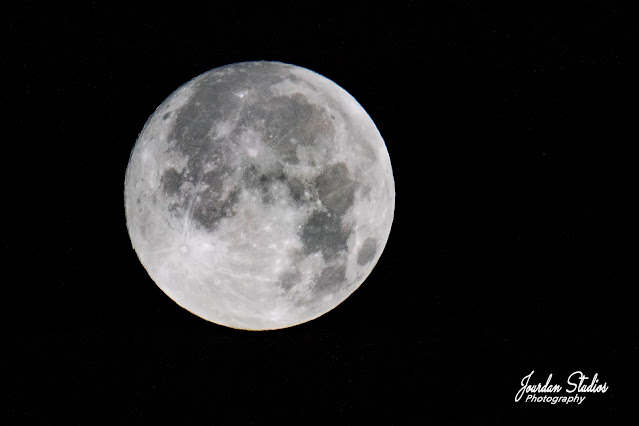 Heading north along the Long Pond/Vermet dike I stopped to try to get a few pics of roosting Mute Swans on some open water in the Vermet Unit. Shooting at ISO 12,800 and -3 Exp. Comp (mistakenly) I was effectively shooting at about 25,000.

Fingers were numb by the time I reached the North Causeway, but at least the wind was negligible. Small flocks of Scaup, Common Goldeneye, Mallard, American Black Duck, mergansers and Redhead were on the Huron River, but the large rafts of Canvasbacks seen earlier were absent. By now the moon was disappearing below the horizon and an approaching cloud bank. I decided I should try to digiscope it despite freezing hands. 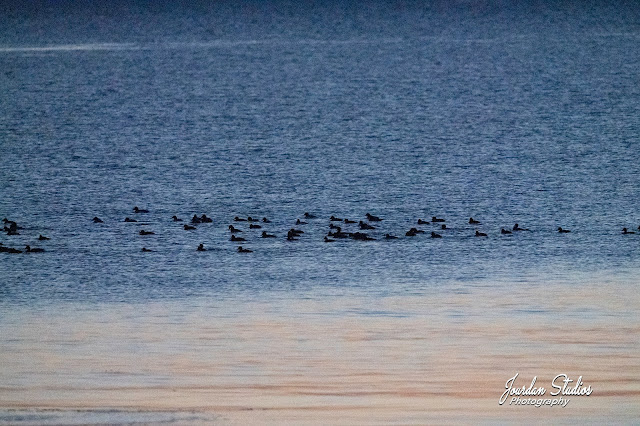 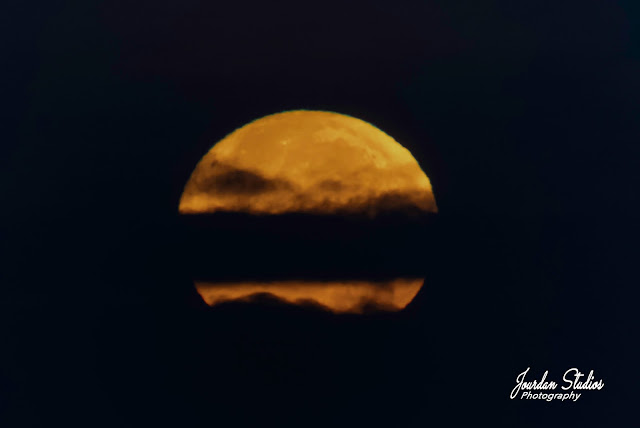 I continued along the North Causeway toward the Banana and scanned the marsh for a Snowy Owl or a Short-eared Owl. Still nothing. The small flocks of ducks were beginning to flush and head out toward Lake Erie. It was till too dark to make out their identifications.
As I reached the Banana and began riding along the north shoreline I spotted a Short-eared Owl float up over the heavy phragmites to my right. I grabbed the camera and began trying to photograph the bird as it soared over the phragmites, and even make a faux dive into the vegetation, but I was perplexed as to why my view was so dark. It turned out that I had the Exp. Comp. dial set to -3 (while shooting the moon) and it didn't get turned back. This would actually work to my advantage as I gained 3 stops of shutter speed and was able to get images in the dark at 1/4000 sec at ISO 6400. 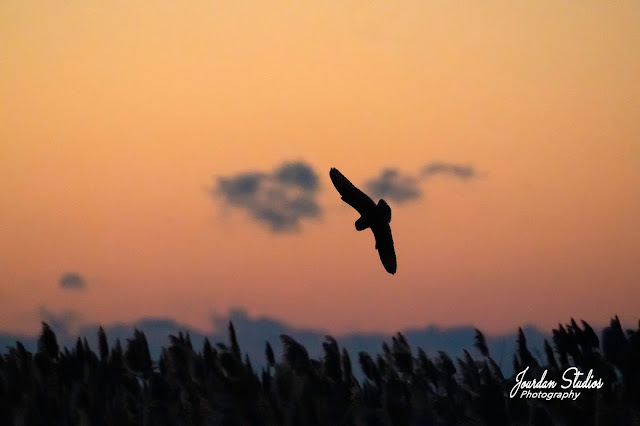 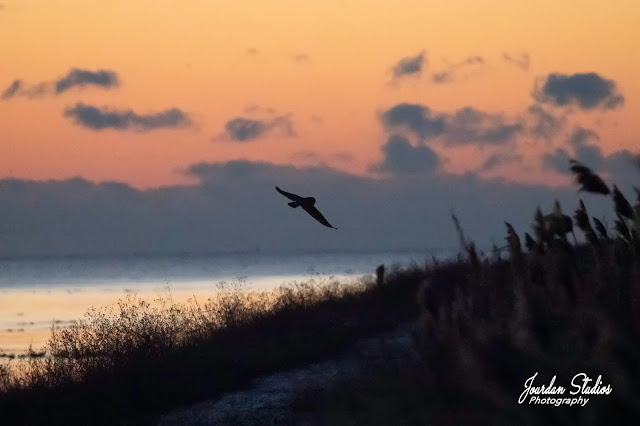 The owl drifted off ahead of me and disappeared to the east. I had hoped to remind it as I continued to ride but would not see it the rest of the morning.
Lake Erie was relatively calm with scattered flocks of waterfowl moving in the midst of a now-emerging sunrise. 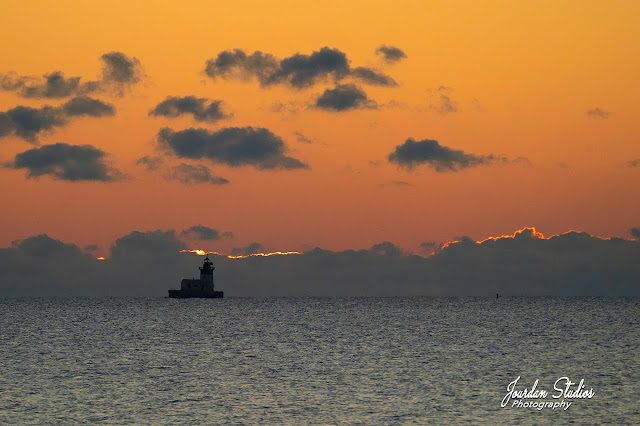 Inland cells were frozen, including most of Cell 4 save for open water at the inlet from Lake Erie, so only small rafts of Common Goldeneye were visible. These birds flushed from a quarter-mile away, so there was no photographing them. One bird did not flush, and turned out to be an immature Long-tailed Duck that swam only a short distance from the shoreline and remained close enough for some digiscoped images. 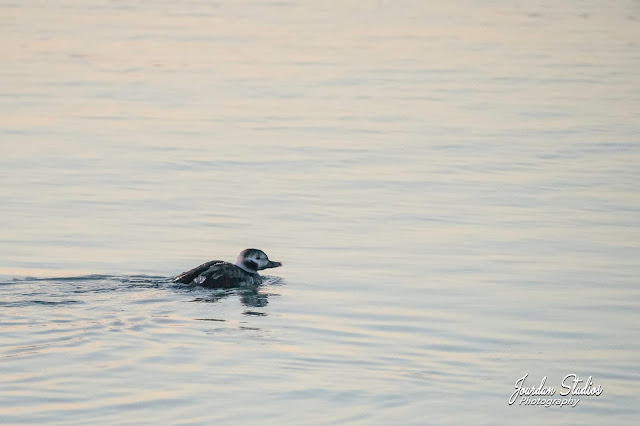 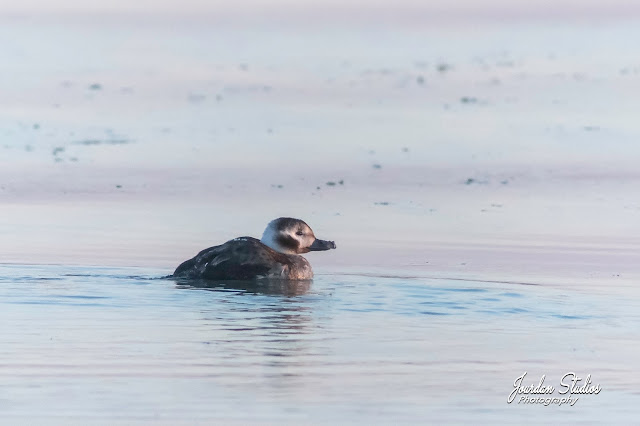 With the Sun now above the horizon and shining brightly I rode down to Cell 2 along the west side of the Banana and would loop back along the shoreline; this would give me a bit of the Sun to my back as I rode northward as I look for a Purple Sandpiper that was observed a week ago Wednesday. Unfortunately the rocks were covered in ice and snow and the stretch of sandy beach across from Cell 3 was covered in mounds of snow and ice. I would not see the bird. 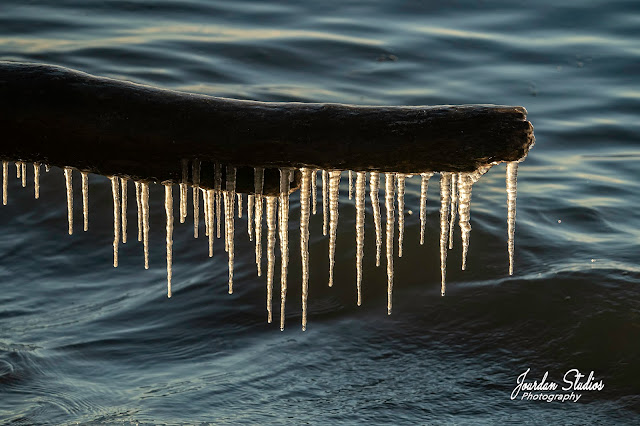 As I reached Cell 4 I spotted a pair of Common Goldeneye resting on an ice shelf next to open water. The female flushed at my approach while the drake remained. I slowly approached to photograph the drake from 60' away. As soon as it saw me it began to franticly look around left and right and make squawking sounds. I was afraid that it was frozen to the ice and began to figure out how I'd get down there to help free it. Fortunately, it must've just be groggy enough from sleep and was looking for its mate before flushing and flying off to join her in open water. Whew. 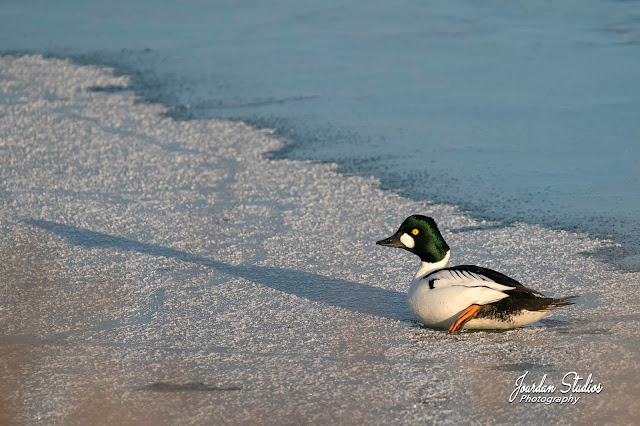 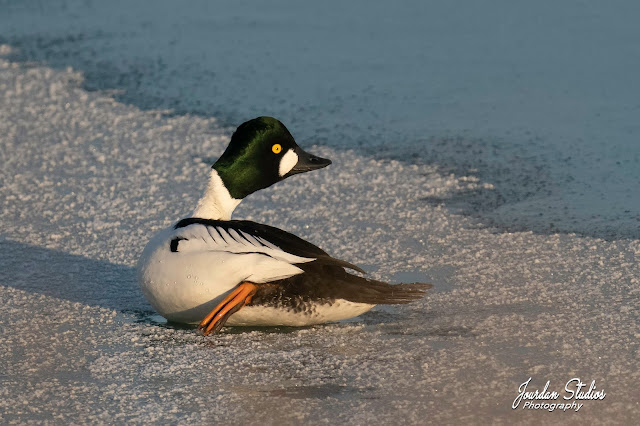 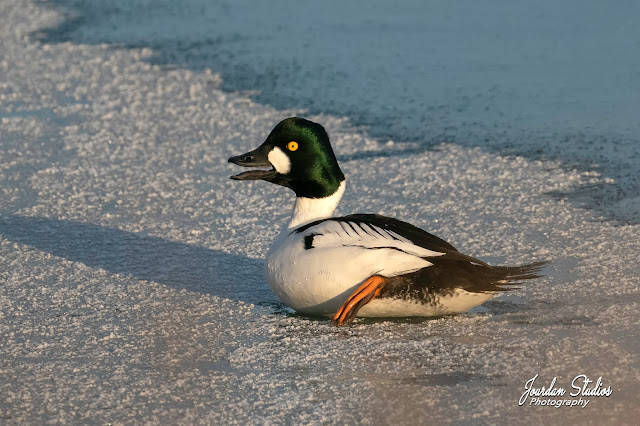 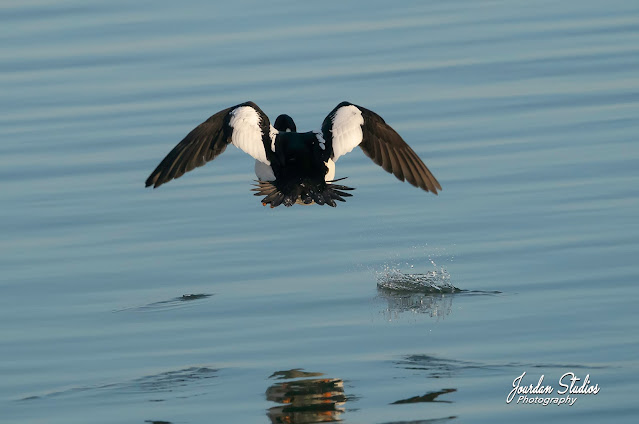 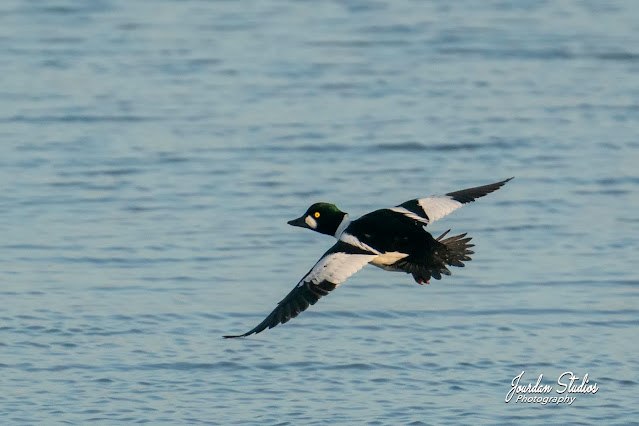 The rest of my ride would be uneventful. The Middle Causeway lacked all signs of life as I left the Banana and headed back to the car. Winds were starting to pick up from the south so there was a bit of a headwind that made the ride more challenging than I cared for. I'd be home before 10 am and thinking about driving to Port Huron to look for Long-tailed Ducks (which I did and proved disappointing - only a dozen seen and they were all on the Canadian side of the Blue Water Bridge).