Yesterday Justin Labadie reported a massive 150+ of American White Pelicans at Pt. Mouillee SGA in Monroe Co., MI. This evening I decided to get the bike out and ride the dikes for the first time since before Christmas 2021.

Arriving at Mouillee Creek parking lot at 4:30 pm there was a slight breeze from the NE that made biking a slight challenge. The ground was soft, and the combination of wind made peddling for the first time a chore. But the dozens of Ring-billed Ducks in the Walpatich and Lautenschlager Units kept the attention on the marsh. A flock of 6 Common Mergansers in the Mouillee Creek also drew attention. 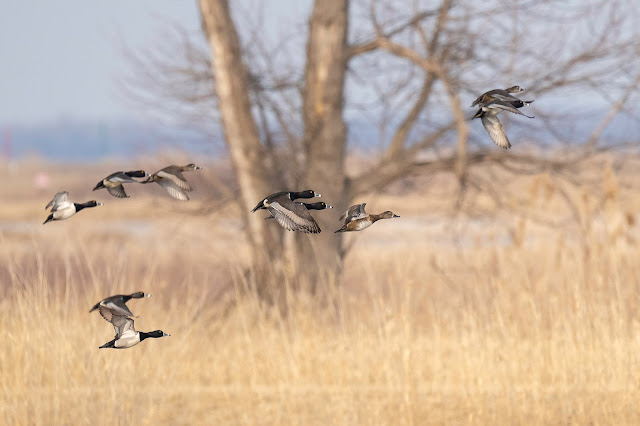 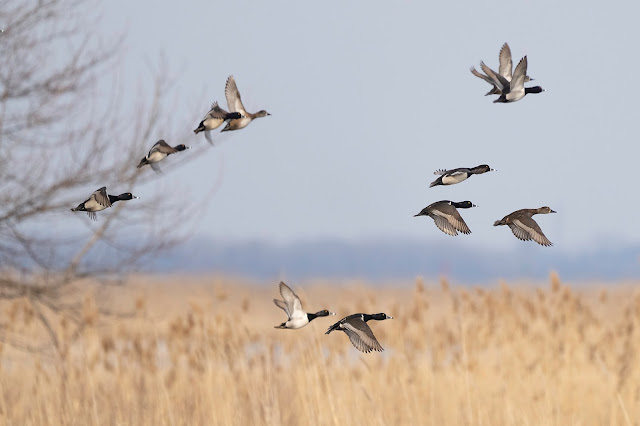 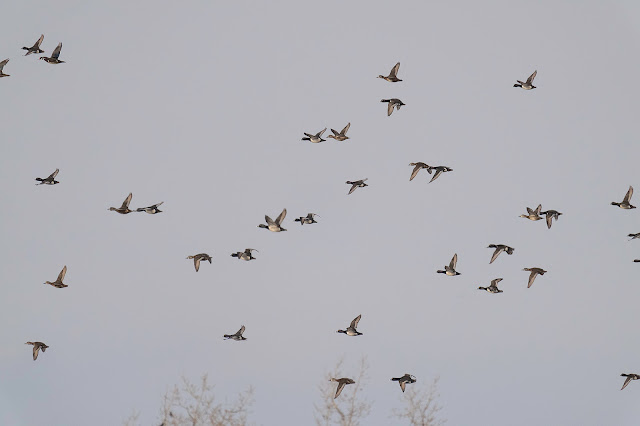 As is custom the ducks this time of year are spooked easily and flushed even when I was hundreds of yards away. So I had to settle for distant flight shots and hope that they'd circle back around.

As I approached the Long Pond Unit I beheld a huge flock of presumed ducks over the Banana Unit. When I put the binoculars up I was looking at Justin's flock of American White Pelicans coming in to roost. I quickly put the 200-600 mm lens up and captured a sweep of the flock at 30 fps  so that I could get a more accurate count. A panorama pic later I had counted 282 birds!

They landed in the Vermet Unit and clustered on the small islands like foam on the shoreline during a windstorm. I would capture a short video scan of them from the Middle Causeway.

Mute Swans were numerous, with 250+ birds seen in both the Humphries and Vermet Units.

Ice is still holding on along the shorelines of most of the units, and is breaking up into massive slush mats in Cell 4. I was stunned to see ice fishermen still using the ice shelf at the south end. A few thousand Ring-billed Gulls were roosting on what little ice was left (tens of thousands more were roosting down at Sterling State Park). 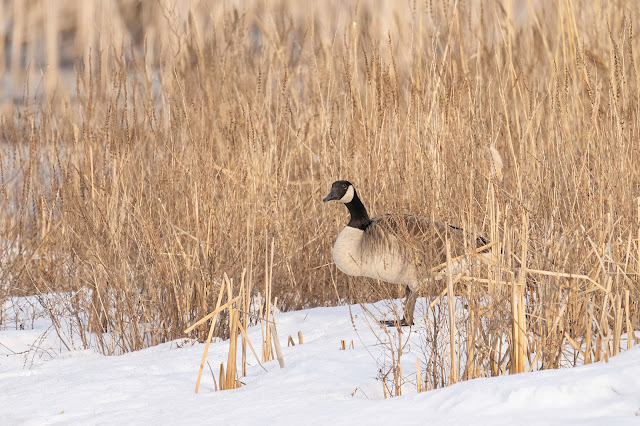 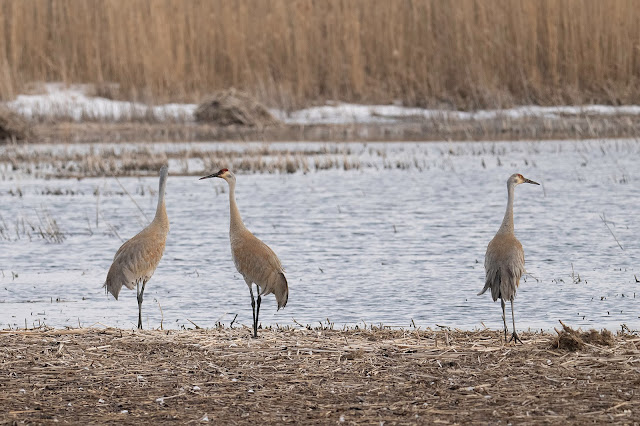 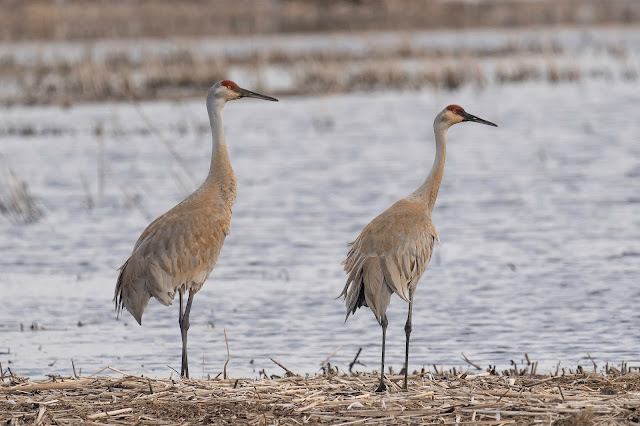 The ride back was a bit easier with the wind now at my back. The Huron River along the North Causeway was relatively quiet, but small flocks of mostly Lesser Scaup were drifting 50 yds out from shore. I managed to catch a few of them in flight to show the white on their secondaries that ends at the primaries. 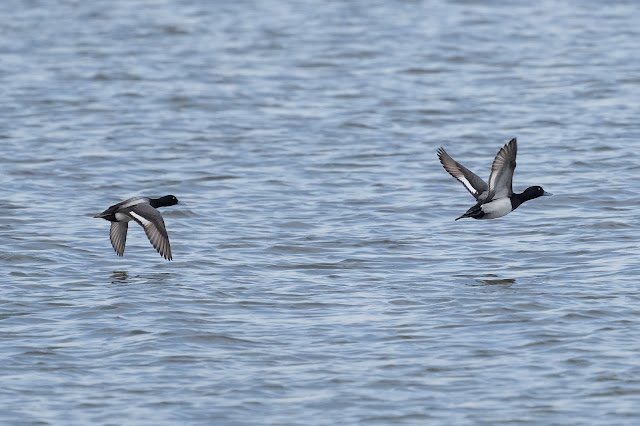 A lone female Bufflehead floated near shore and was unconcerned by my proximity. 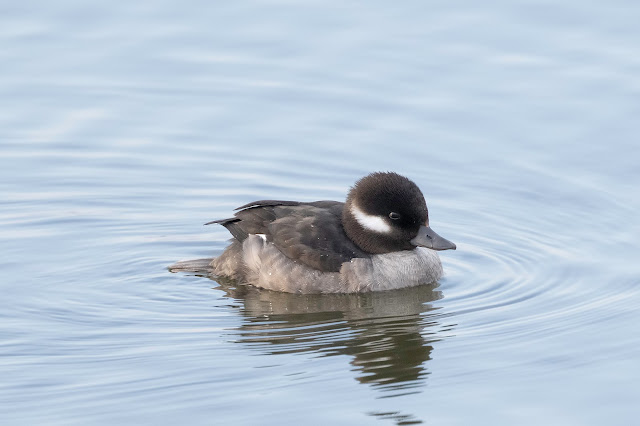 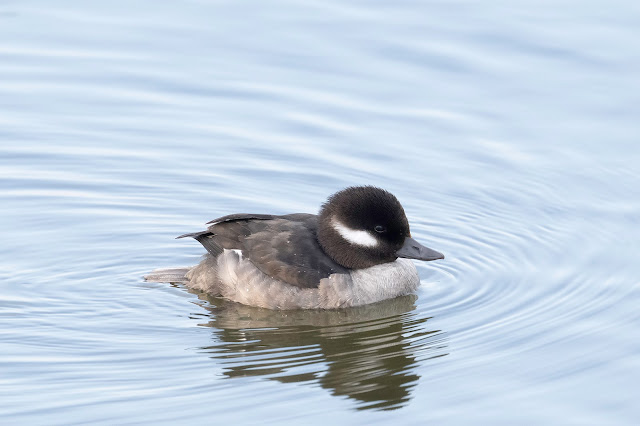 The ride back to the Middle Causeway was slower, but I managed a flew flight shots of fly-by Redhead. 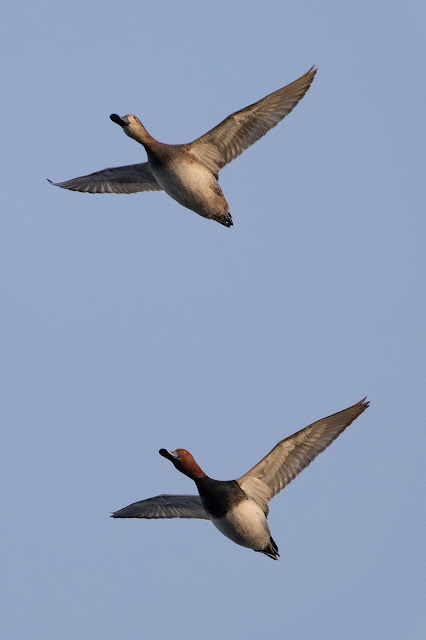 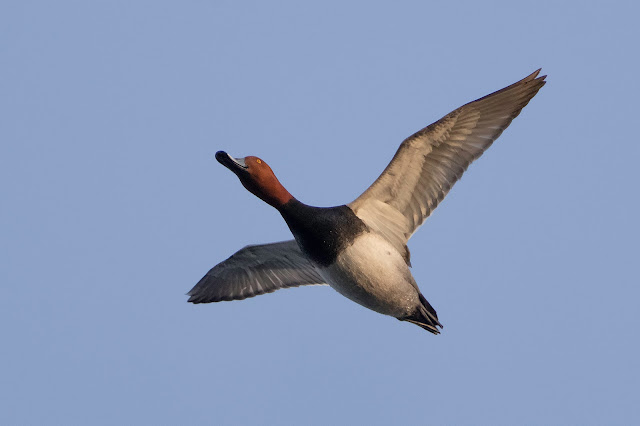 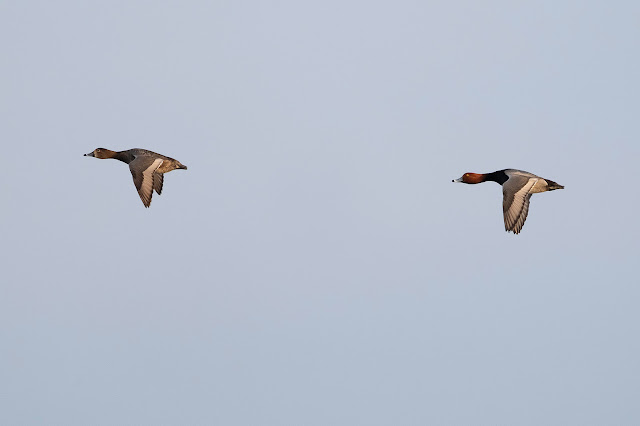