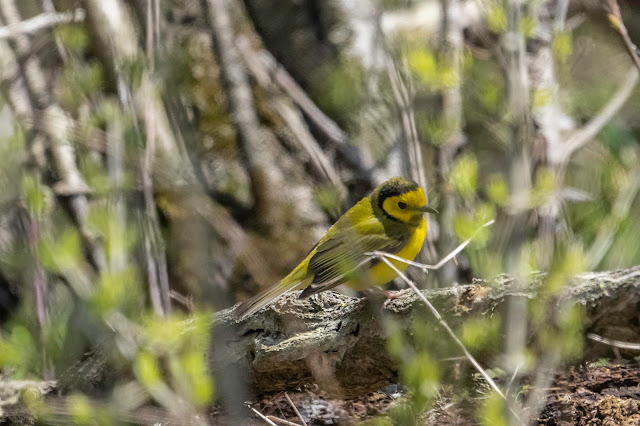 I took an early afternoon walk through the Detroit River Wildlife Refuge. Skies were mostly clear and the air was a cool 50F. Buds are starting to break. The refuge trails were relatively quiet, but a pair of Eastern Phoebes near the outdoor center were a nice find. 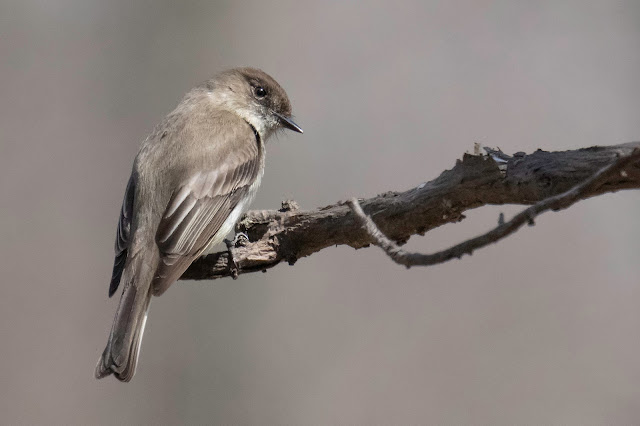 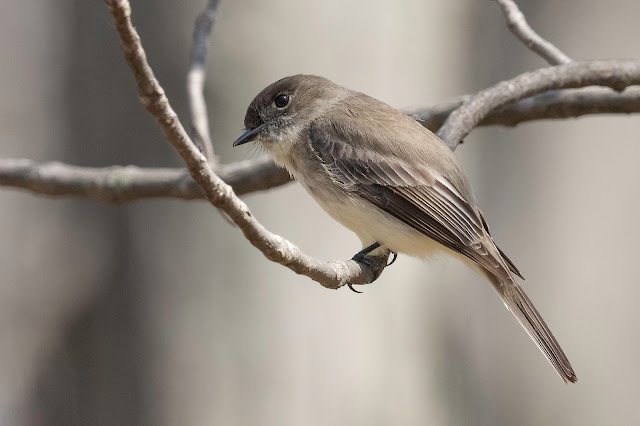 A FOY Blue-gray Gnatcatcher was buzzing overhead, but challenging to photograph. I'd have to wait until I headed to Lake Erie Metropark to get some quality pics.

The long trail along the west side of the Monguagon Drain was muddy. Walking was a chore, but worth the Hermit Thrush that quietly appeared in the brush to my right. Returning to the main causeway brought a Great Egret roosting in the bare trees lining the ponds. I could only manage a few flight shots as it circled the tree line. A Carolina Wren and FOY House Wren were nice finds. 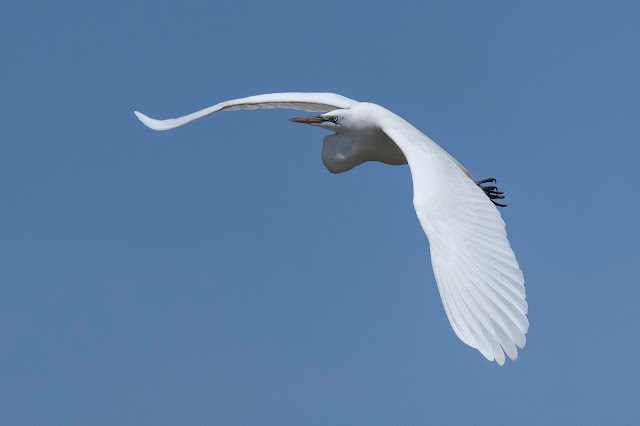 I headed to LEMP to walk the Marshland Museum Trail. At the entrance I greeted Luc the Bald Eagle and immediately found a pair of Blue-gray Gnatcatchers foraging overhead. 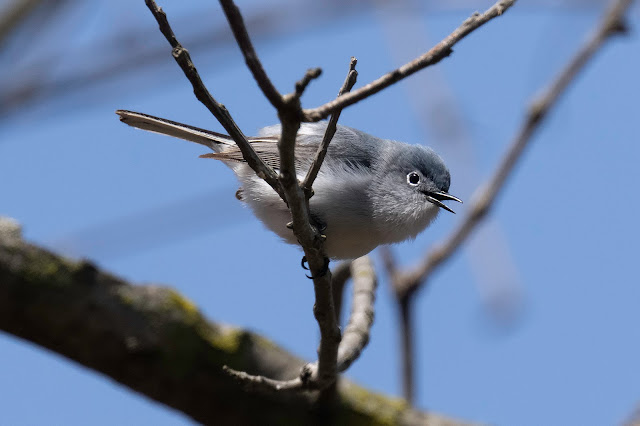 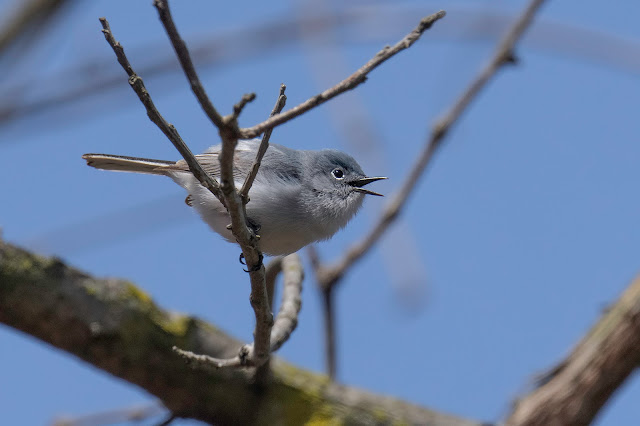 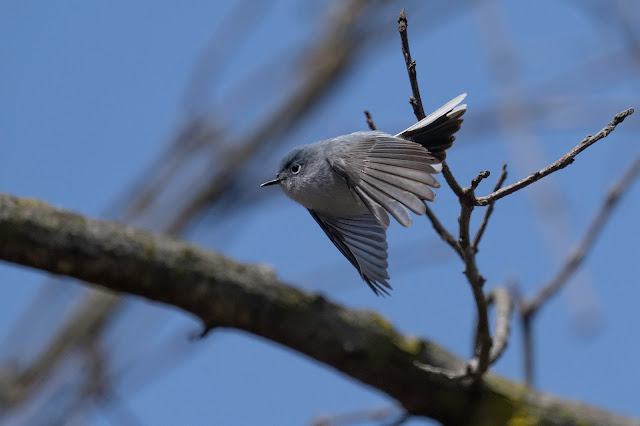 Along the east side of the trail a Cedar Waxwing made a brief appearance ahead of me. Otherwise, there were no warblers to see or hear. 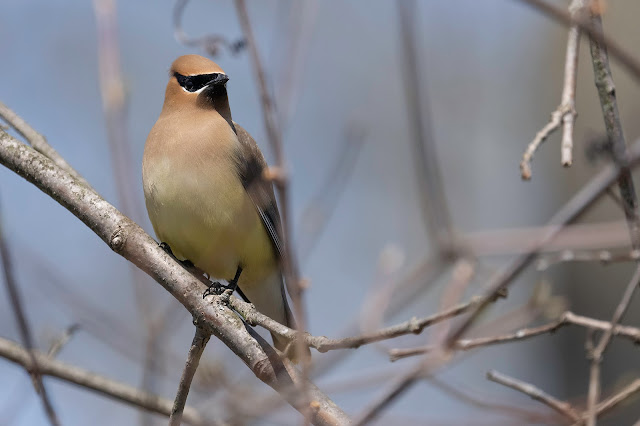 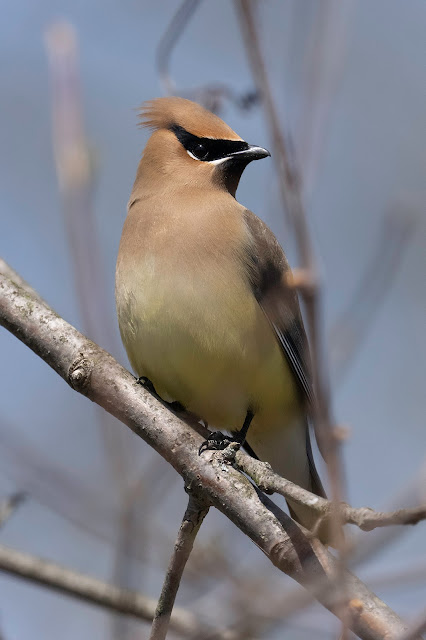 A pair of Swamp Sparrows were the only birds seen along the north end of the trail. The west side was also quiet until a pair of Ruby-crowned Kinglets buzzed me from the trailside. 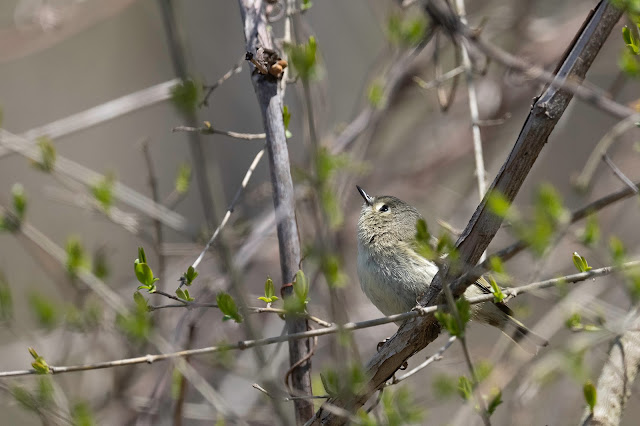 As I passed the observation dock I caught a glimpse of an olive-green warbler with white outer tail feathers that fanned in flight. I immediately thought Hooded Warbler! I was kinda shocked to see it a few moments later and verify it by its dark head and hood. 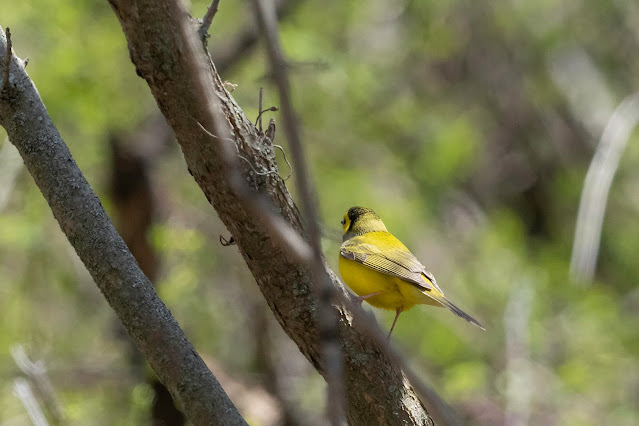 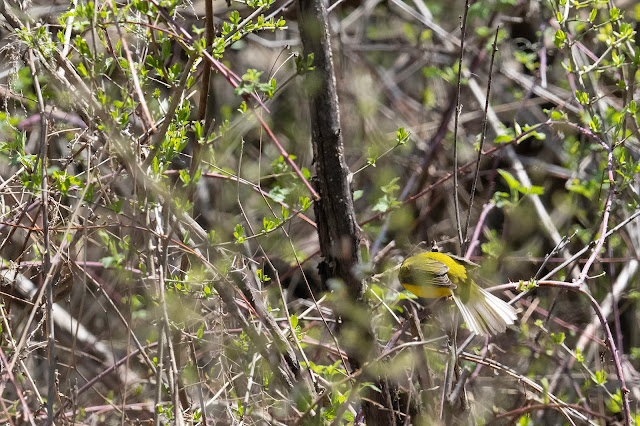 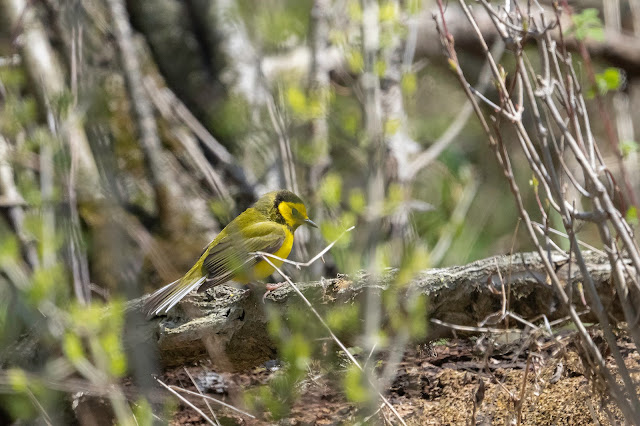 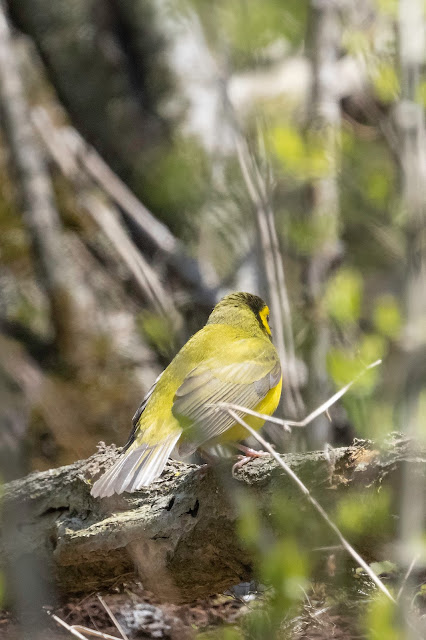 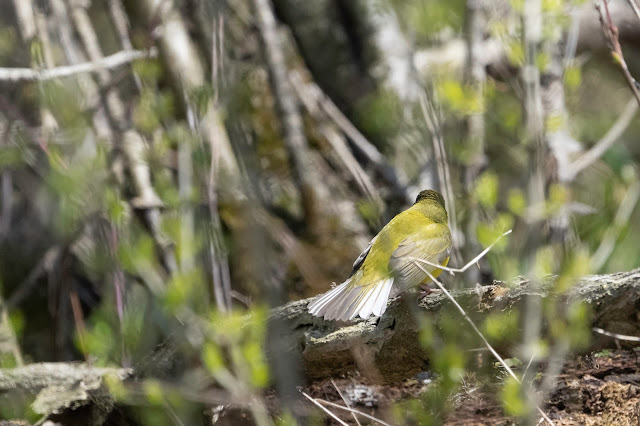 Unfortunately the bird was skulking in thick brush and only made brief appearances through openings in the understory. I managed to get a few record shots before it continued on into the woods. I headed around to the south side of the trail and looked for it, but it did not reappear. I settled for a bright White-throated Sparrow. 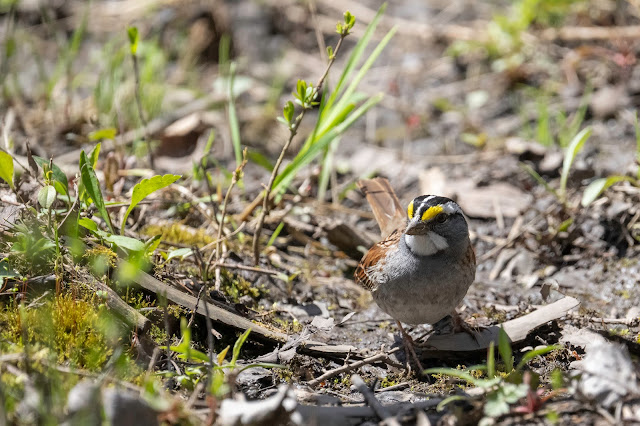 Luckily, Paul Cypher reported it a bit later, and others (Tom Mulcrone) would get to see it a day later!
On my way home I took a swing down Roberts Road to look for the White-eyed Vireo that was seen near the cement silo. Though I sat and listened for 15 minutes I could only turn up a Palm Warbler that was bouncing around next to the car. 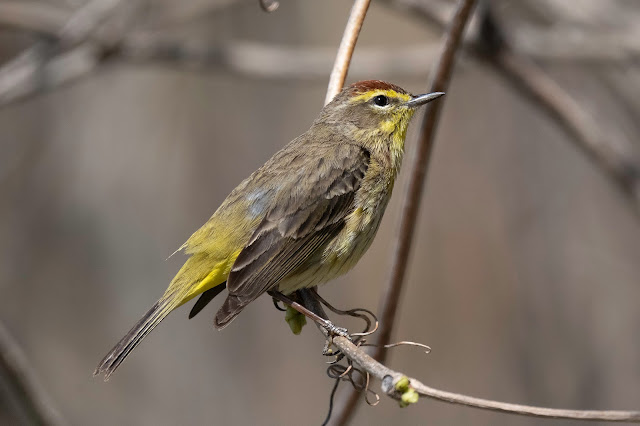 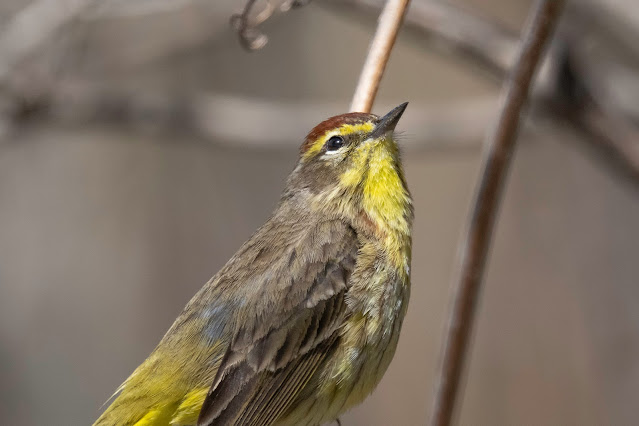 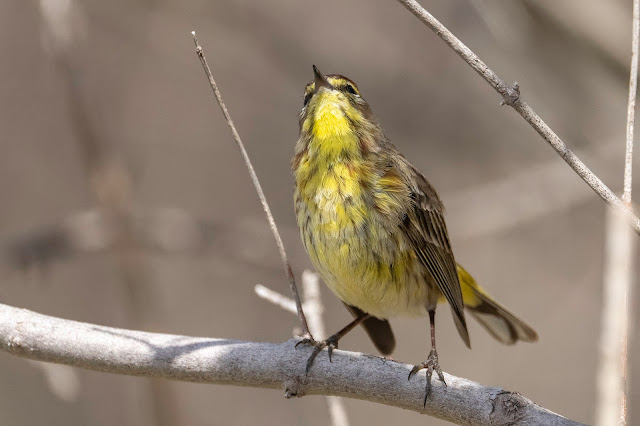 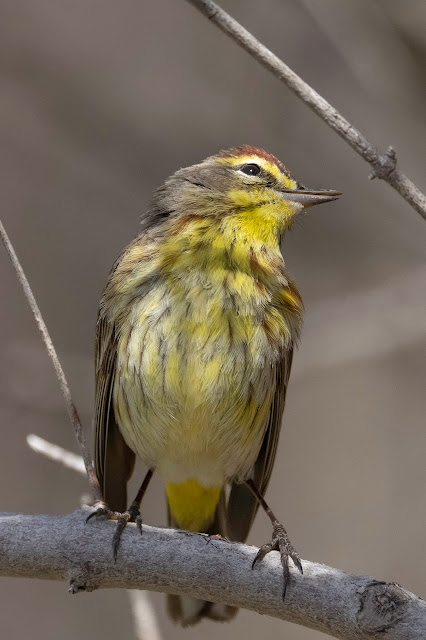 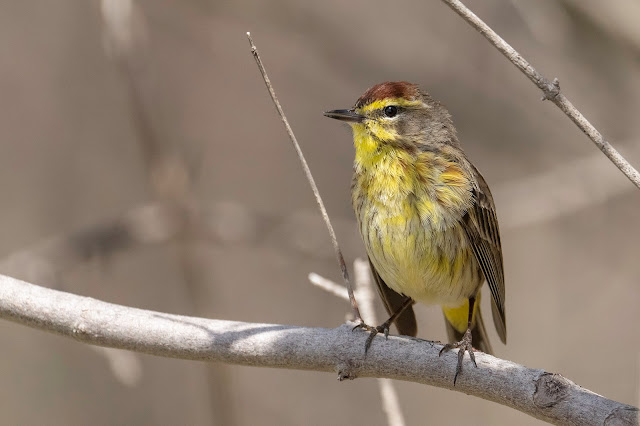