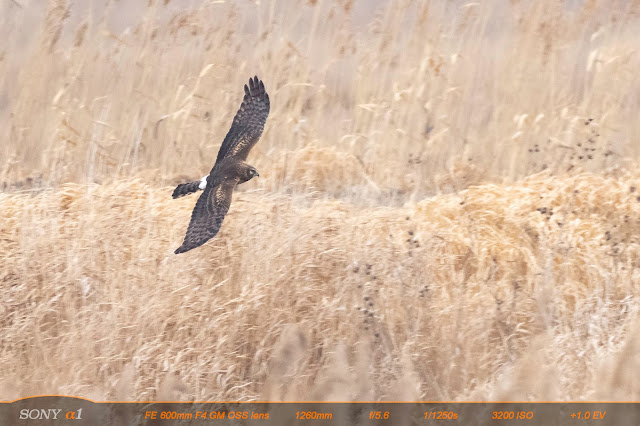 Forecast called for clear - cloudy - clear skies today with temps in the low 40's. Perfect January biking weather... Or so I had hoped.

I pumped up the tires and headed to Pt. Mouillee SGA for the first ride of 2023. Skies were relatively clear with clouds on the eastern horizon just before sunrise. Temps were a less-than balmy 26F with a light SW breeze. As I headed out along the Middle Causeway from the Mouillee Creek parking lot I couldn't help notice how much litter was blowing around; I'd make it a point to pick up some garbage before leaving.

Inland units were mostly frozen with a few patches of open water still enticing for ducks. Unfortunately, there were no ducks. Just a couple dozen Canada Geese lifting off from a half-mile away. Passerines were largely absent, as well, with only a couple of Song Sparrows scooting across the trails ahead of me. Speaking of scooting, the first Mink of the year scooted across the causeway ahead of me as I attempted to identify the only ducks visible in the Walpatich Unit: Mallard. I was unable to get any pics of it, so I settled for a Muskrat resting on the ice at sunrise. 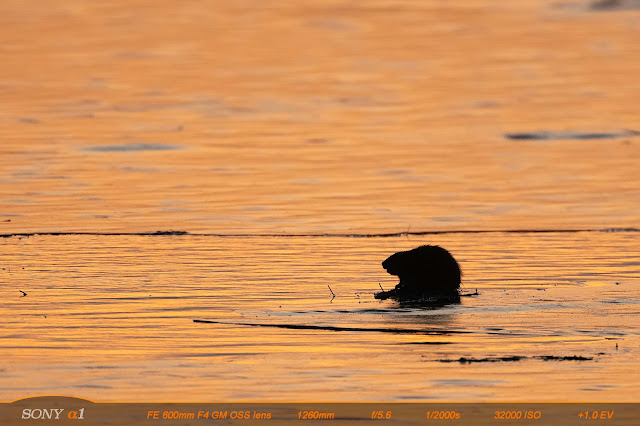 Heading north between the Vermet and Long Pond Units there were no birds to be seen.  The sunrise was the only point of interest. 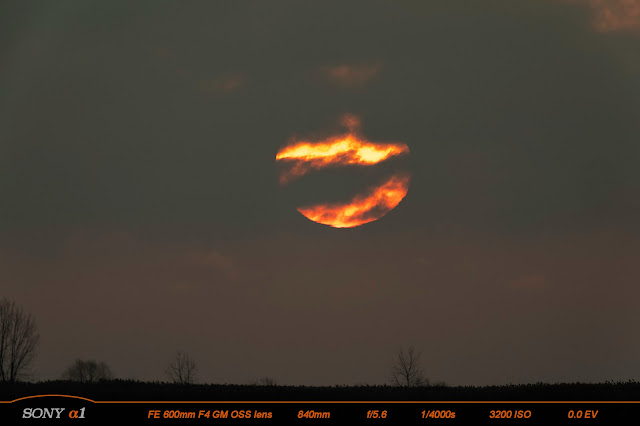 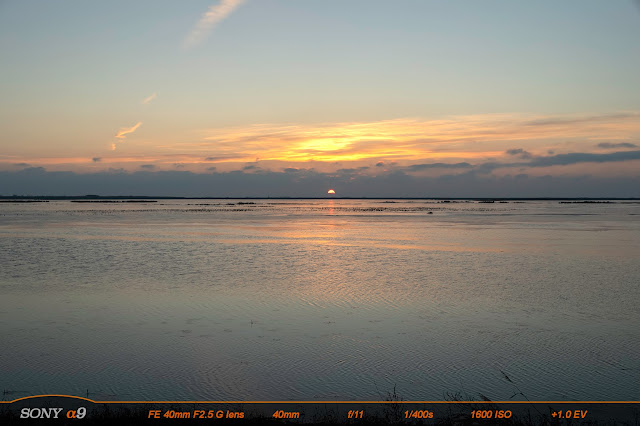 With the Huron River open but absent of waterfowl I rode to the Banana Unit and circled around to the Lake Erie side of Cell 5. A single Northern Harrier was circling far over the unit but too far to photograph. On Lake Erie scattered flocks of Canada Geese and Mallard were swimming close to shore while a small flock of Herring Gulls foraged on a school of minnows.

As I hit the shoreline and turned south the winds picked up. This required some downshifting and bundling. Riding now into the wind required some pushing, and the cold air was painful. Luckily, I had forgotten my scope in the car so I saw no need to scope the flock of several dozen swans on the ice in the Vermet Unit. And the 7 Bald Eagles circling over Cell 4 were sufficiently backlit that no photos were desired. I did ride past a Tundra Swan that was swimming out from shore so it was close enough to deserve some attention. 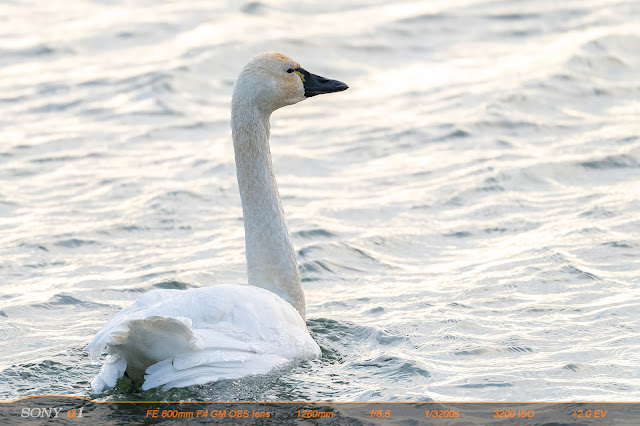 Lake Erie along the Cell 3 shoreline was also quiet. I did happen upon another small flock of Canada Geese and Mallard with a single Canvasback among them. Sheets of ice were piled up along the shoreline of the beach in massive piles. Though there was open sand along the shoreline I failed to find any winter shorebirds.

Dredging pipe was strung along the shoreline next to Cell 3 and required climbing to get to the path separating Cells 2 and 3. I noticed that much of the phragmites around Cell 2 was mowed, which provided much-needed open areas for another roving Northern Harrier. A third bird was flying over Cell 3 and was followed shortly by a Cooper's Hawk. But again, the birds were too far away to photograph.

I'd return to the Middle Causeway and start heading back toward the car. The ride was slow due to the cold wind and the lack of birds made the ride even more laborious. Luckily, I finally spotted a Northern Harrier flying close enough over the Long Pond Unit warrant some images. 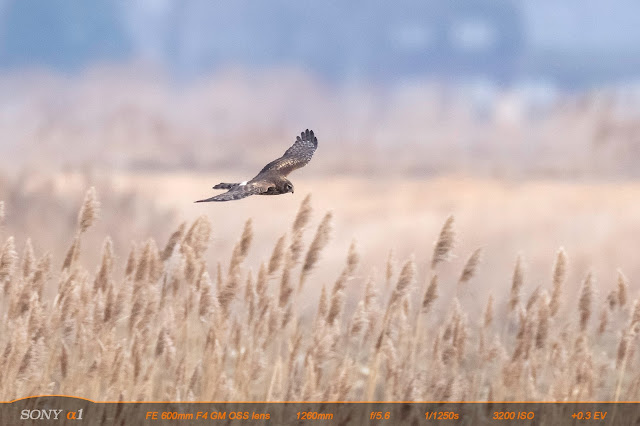 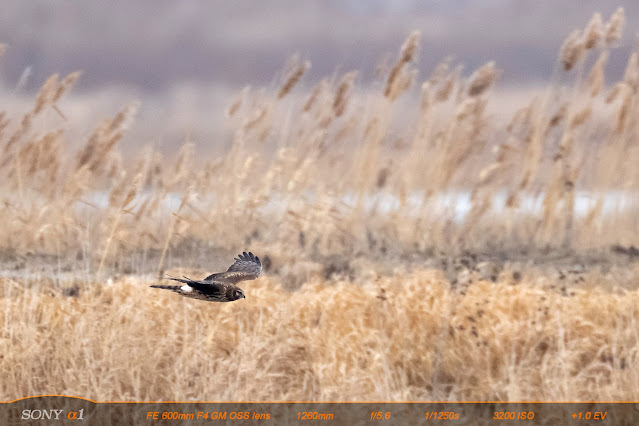 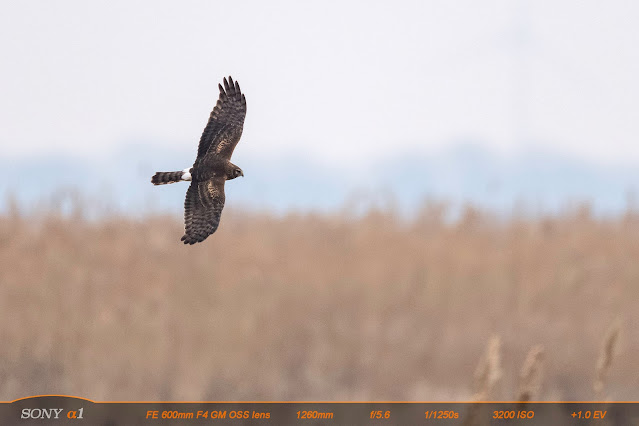 Though it would never come close enough I was happy to photograph something. I'd return to the car with cold bones but still took some time to pick up garbage around the parking lot; I filled a half garbage bag before continuing down Roberts Road, back to Rheaume Rd, and finally to Haggerman Rd. I'd see absolutely nothing along all three roads.