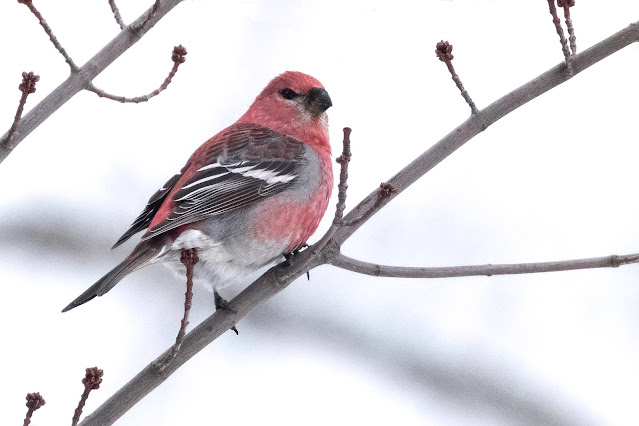 Robin and I had an early breakfast and took off for Whitefish Point. Driving M-28 west to US-123 north we arrived at Whitefish Point shortly before 10 am. Roads were clear and less than 6" of snow were in the woods on either side. Of concern, however, was the ice cover on all of the trails and in the parking lot that made walking treacherous.

I walked over to the feeders and found them filled with sunflower seeds. However, the only action came in the form of a pair of Black-capped Chickadees, a single Red Squirrel, and this Hairy Woodpecker. 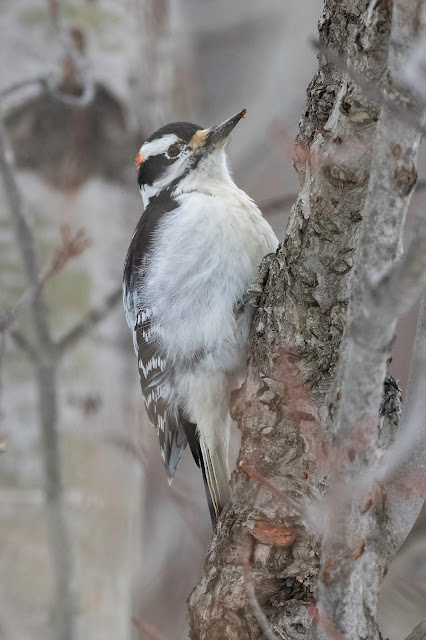 We then took a walk down to the beach next to the Shipwreck Museum and found it quiet but cold. Winds were blowing so we didn't stay long.
I headed back to the feeders, then took the boardwalk back out to the point where the waterbird shack was located. Again, the area was quiet, and I spent most of my time trying to avoid the rough ice on the boardwalk. But, once on the beach the walking was much easier. 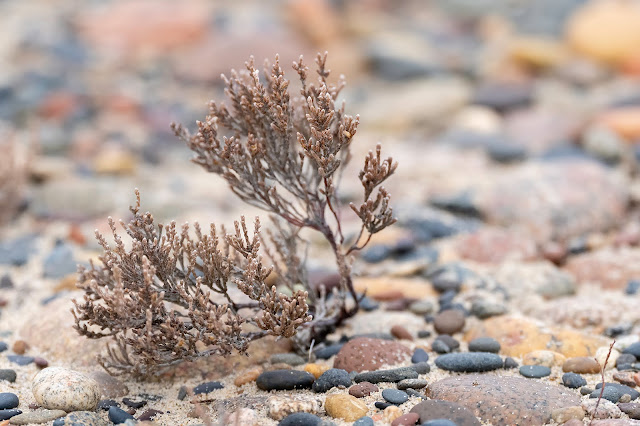 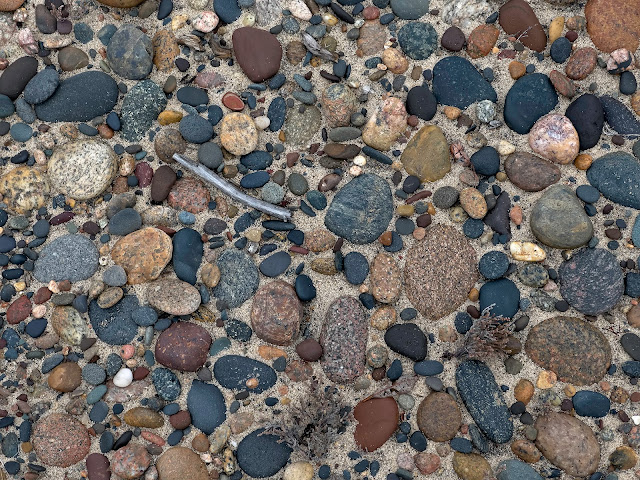 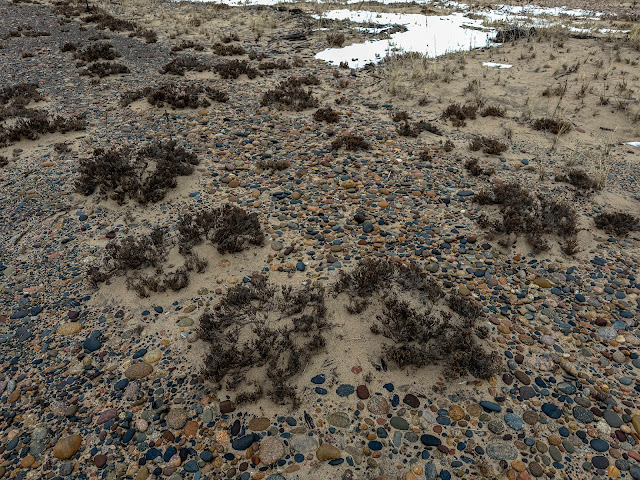 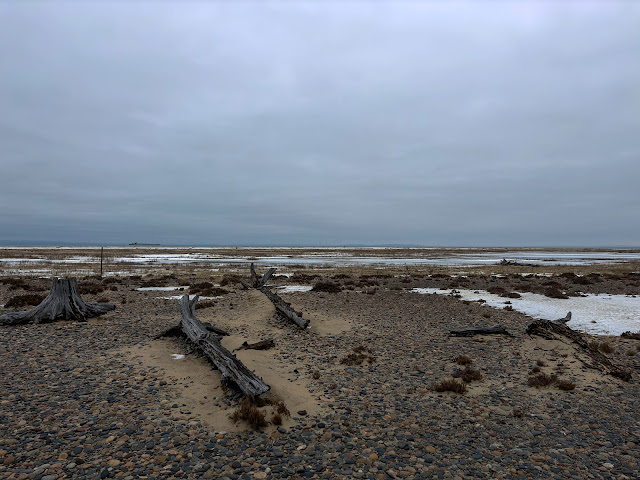 I paused long enough to pay homage to the waterbird shack and prayed for future rafts of loons and waterbirds. 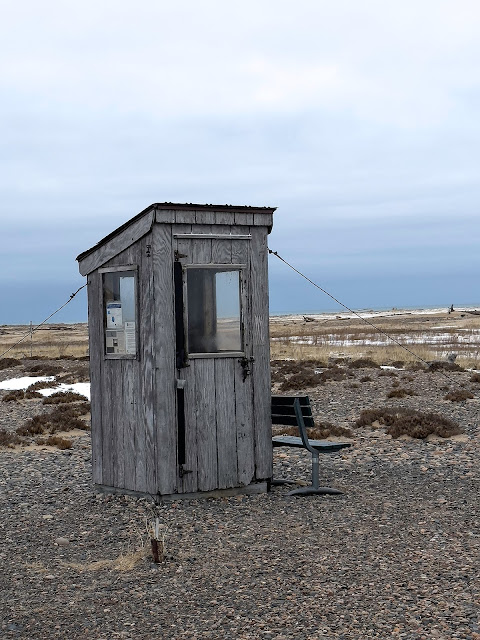 We then returned to town and headed toward the Tahquamenon Falls Brewery for lunch. Along the way we spotted a pair of Ruffed Grouse on the road. Turning around to get photos they scattered, but Robin was able to count four on her side of the car while I saw two on mine. Though they were in the woods I managed a few pics through the trees. Males were displaying while females were observing. 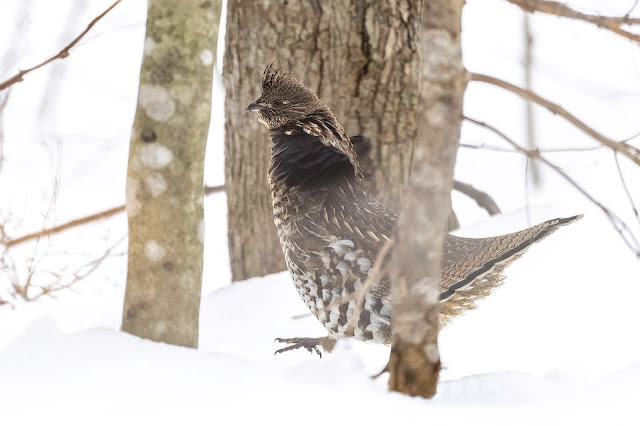 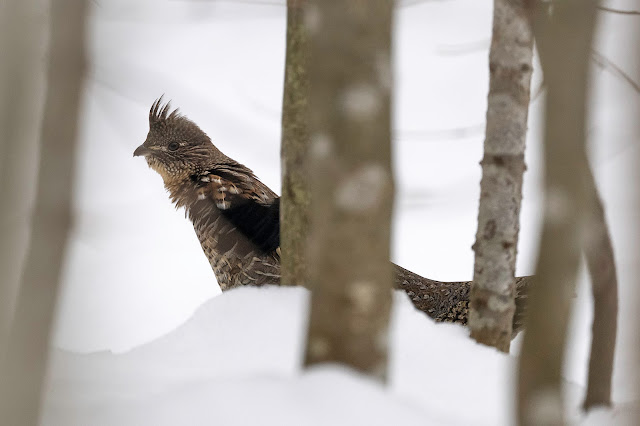 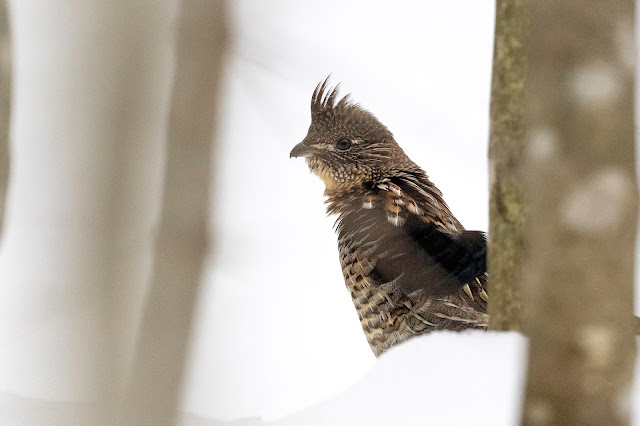 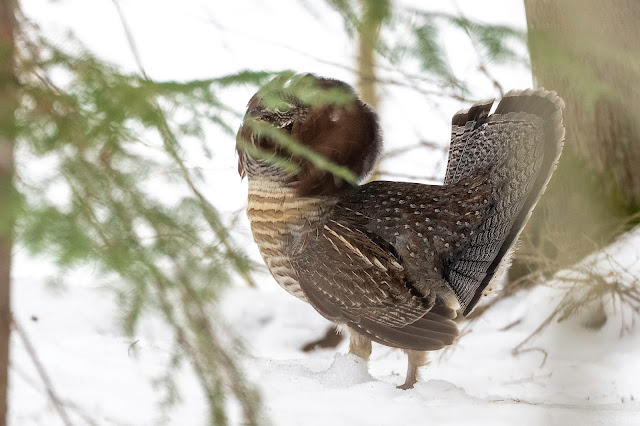 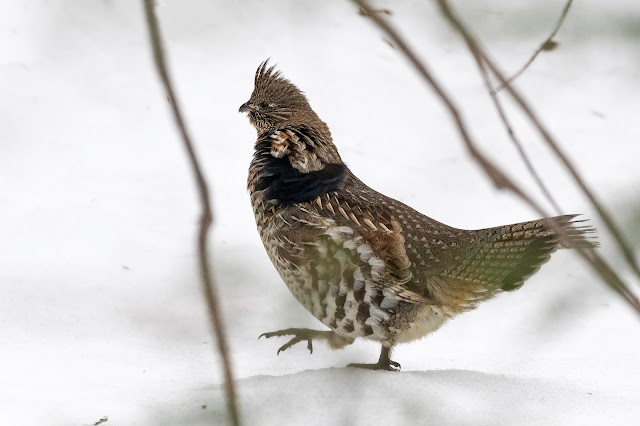 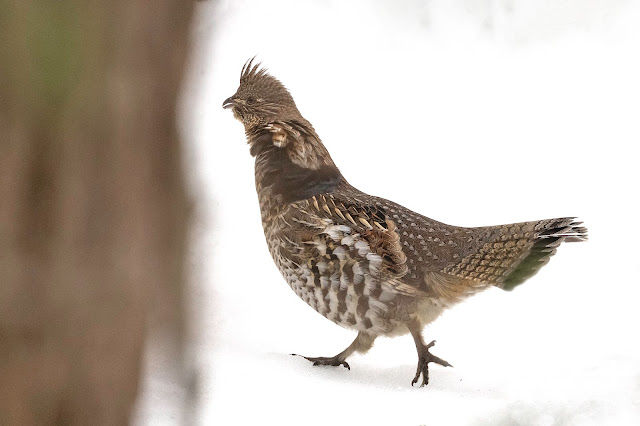 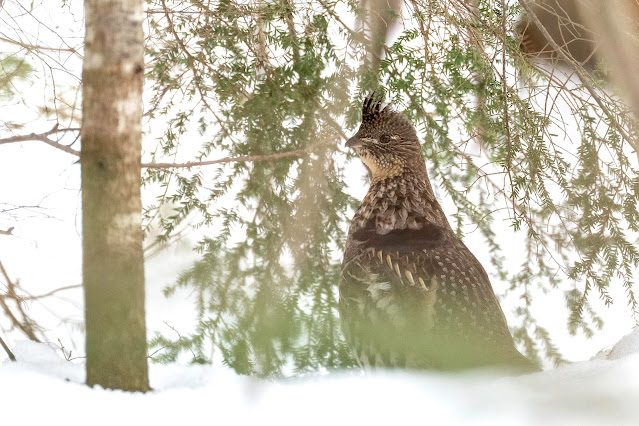 Farther up the road a pair of Red Crossbills were in the road. A red male and green female. I managed a quick photo burst before they both took off to deeper cover. We'd also come across 60 birds in the road but they were all American Goldfinch. 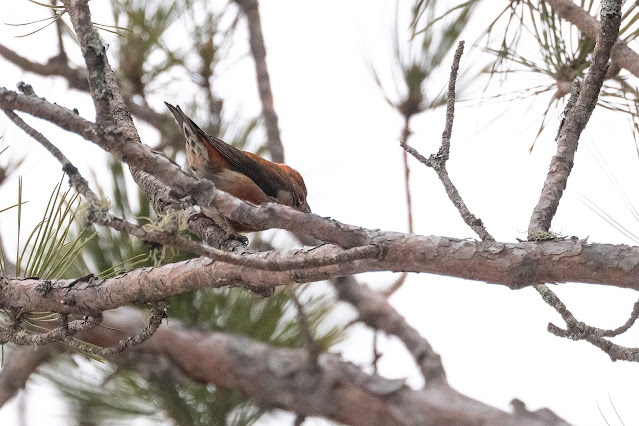 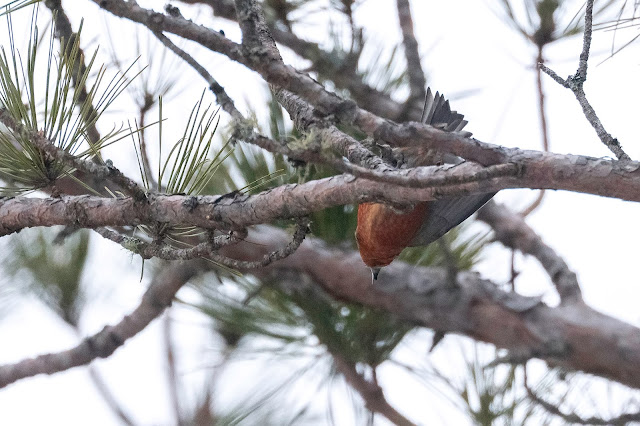 Pine Grosbeaks were just a bit more cooperative. We drove past small groups of birds feeding on grit in the road and managed a few pics as they flew back into the trees. 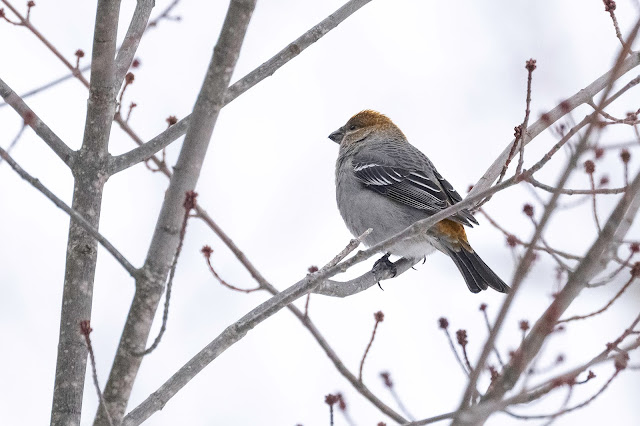 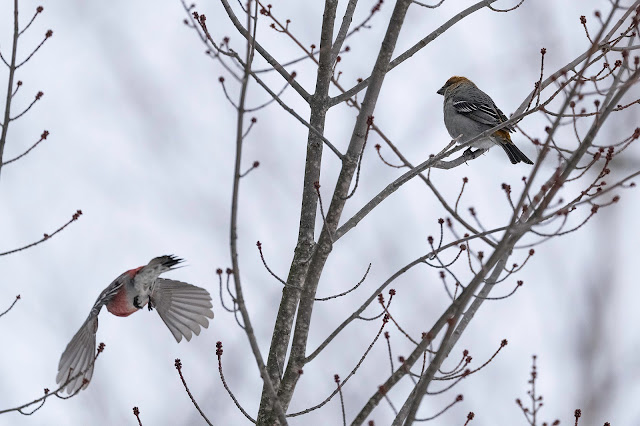 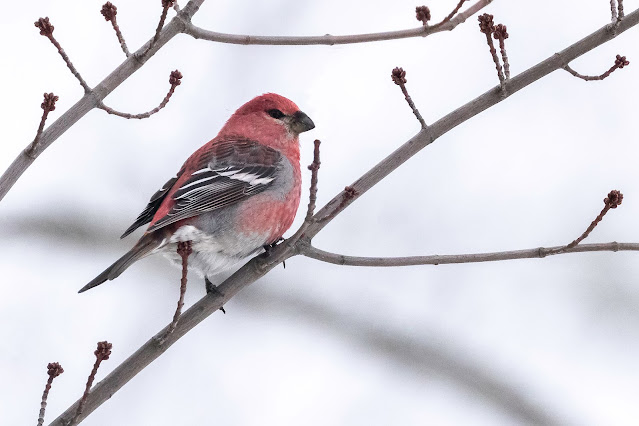 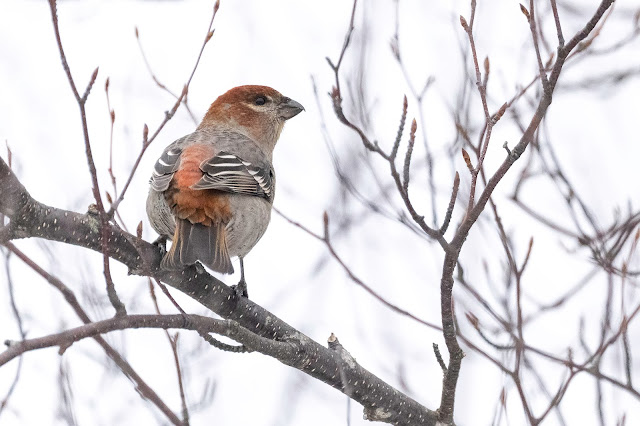 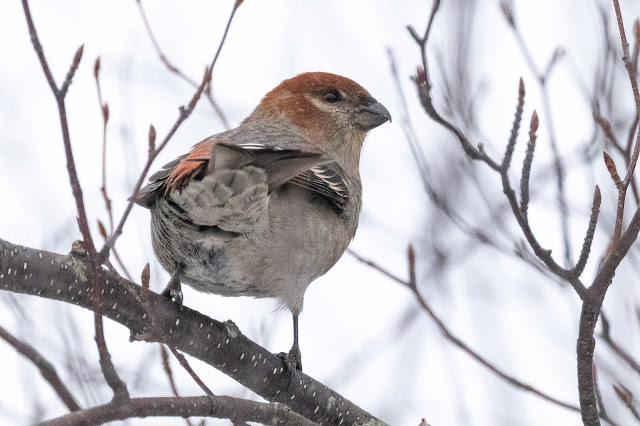 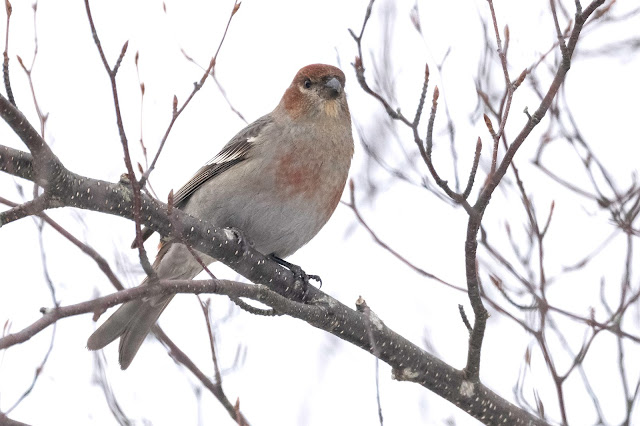 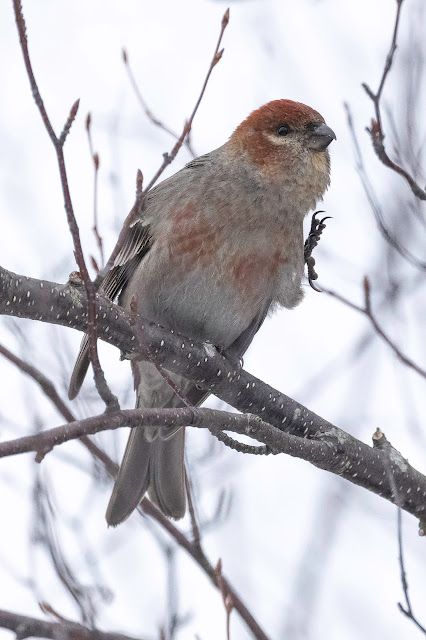 Returning to the Soo we took a quick loop back down Riverside Dr. to check out the Dunbar Forest (quiet) then headed back down M-28 toward town. Just like yesterday I was able to find a Rough-legged Hawk perched high atop a tree next to the road and get a few images. 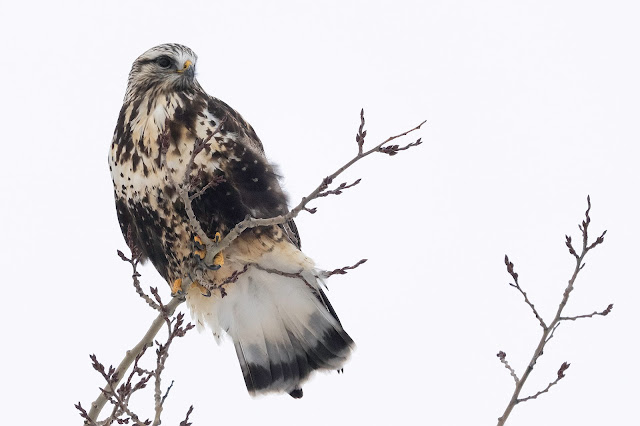 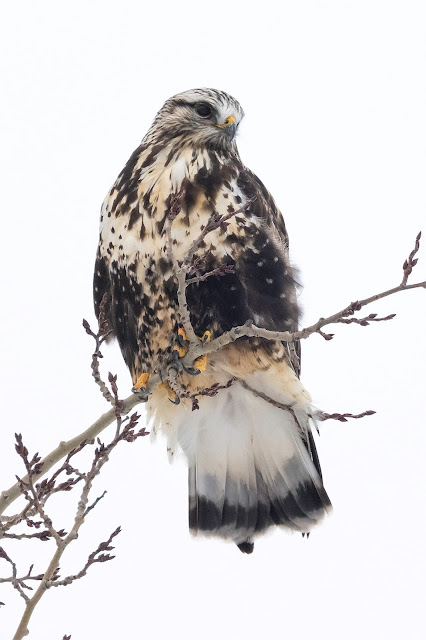 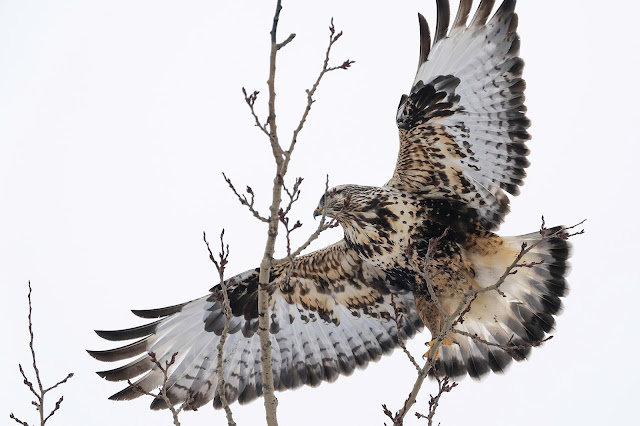 A quick dinner and we were back in the hotel room for a shower and much-needed rest. We'll be heading home tomorrow morning ahead of a winter storm, so our timing here was perfect. Perhaps we may see a Snowy Owl on the way home...